As we head into the hot summer months LiveNOW from FOX talks about keeping kids safe in dangerous temperatures.

Relentless, record-breaking heat will continue for a large portion of the country on Wednesday, with more than 100 million Americans under a heat-related alert and at risk of heat-related illnesses.

Temperatures across much of the country will be in the 90s to 100 degrees or higher. Here's a look at the hot forecast in each region: 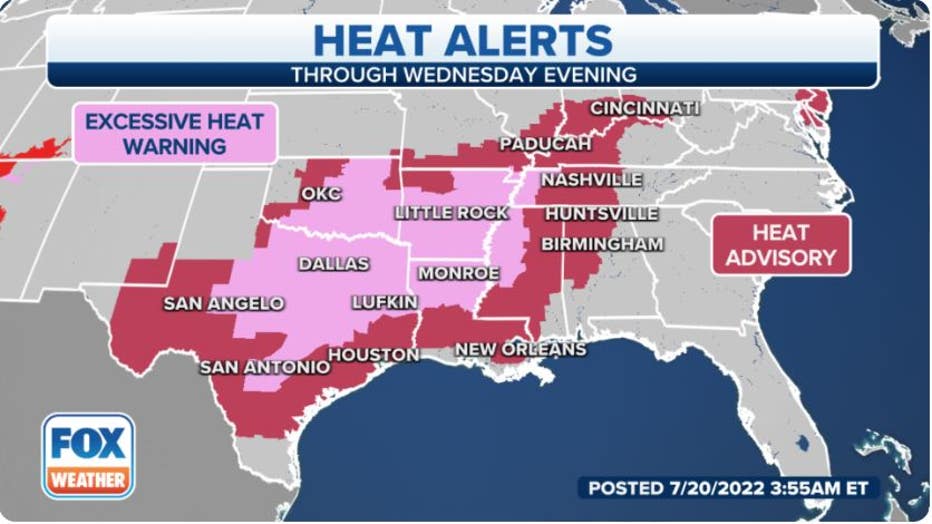 Heat alerts are in effect across the South.(FOX Weather)

Heat Advisories and Excessive Heat Warnings are in effect from Texas through the southern Plains and lower Mississippi and Ohio valleys, where temperatures are expected to reach triple-digits in many locations.

Included in the Excessive Heat Warnings are major cities in Texas, such as Dallas, Lufkin, San Angelo and San Antonio. Outside of Texas, the warning includes Oklahoma City, Little Rock, Arkansas, and Monroe, Louisiana.

Heat Advisories are in effect elsewhere from Houston to New Orleans and north to Birmingham and Huntsville in Alabama, Nashville, Tennessee and Paducah, Kentucky.

HOW THE WEATHER YOU'RE ACCUSTOMED TO AFFECTS NATIONAL WEATHER SERVICE HEAT WARNINGS, ADVISORIES 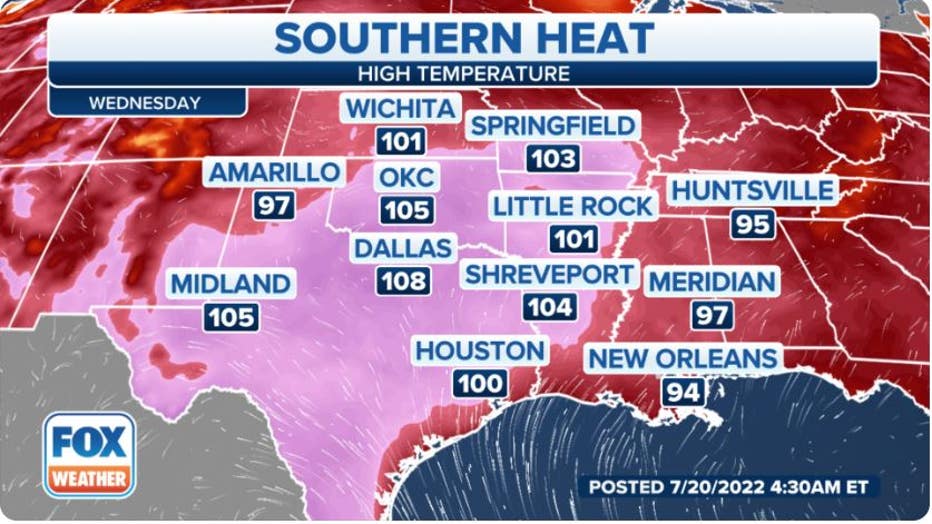 Specifically, temperatures in Dallas are expected to reach 108 degrees on Wednesday with Midland around 105 and even Houston hitting the century mark.

Amarillo will be slightly "cooler" at 97 degrees.

The sweltering heat will also extend into the Oklahoma City metro, with a high temperature of around 105 degrees during the afternoon.

Wichita, Kansas and Little Rock, Arkansas, will be around 101 degrees, with Shreveport, Louisiana, rising to about 104 degrees.

Springfield, Missouri, will also see triple-digit temperatures during the afternoon, with a high of about 103 degrees.

WHAT IS THE 'FEELS-LIKE' TEMPERATURE? 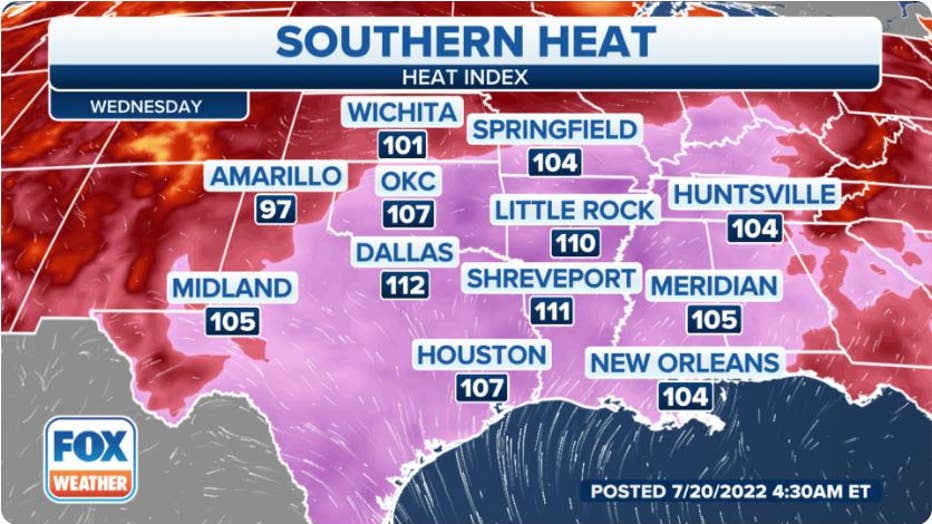 The humidity will make it feel even hotter across the region.(FOX Weather)

When you factor in the humidity across the region, it will feel much hotter.

Dallas will feel like it's about 112 degrees Wednesday afternoon, with Little Rock and Shreveport also feeling hotter than 110 degrees. Houston will be close behind, expected to feel like 107.

FIRESTARTER: LEAVING YOUR WATER BOTTLE IN THE SUNLIGHT CAN HAVE DISASTROUS RESULTS

"You can die from this kind of heat if you’re not careful, especially if you work outside," FOX Weather multimedia journalist Robert Ray said.

And people will be doing whatever they can to stay cool on Wednesday.

"People today basically they’re going to try to beat the heat like they have every day," Ray said. "They’re going to be out on the Colorado River and Lake Austin." 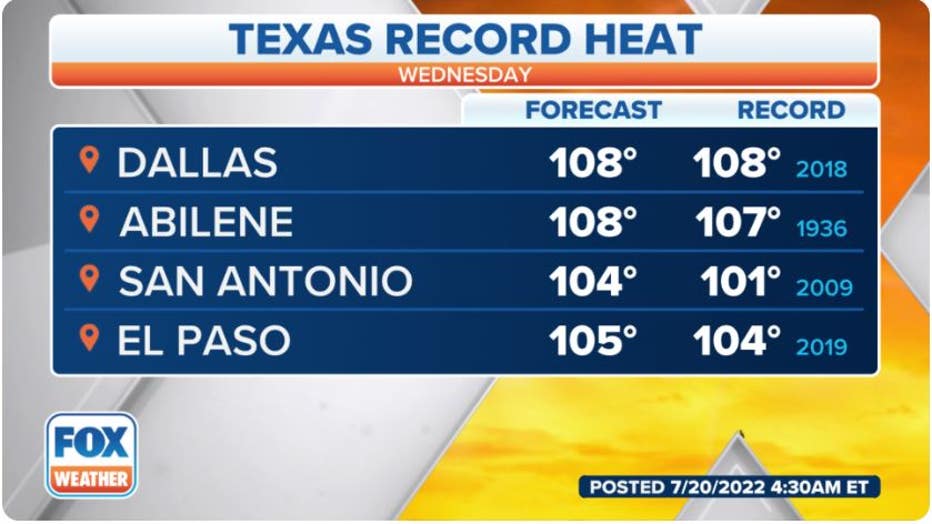 The heat is also expected to tie or break records across the Lone Star State on Wednesday, on the heels of several records in the region that were tied or broken on Tuesday:

WHY DOES THE AIR QUALITY GET SO BAD IN THE SUMMER? 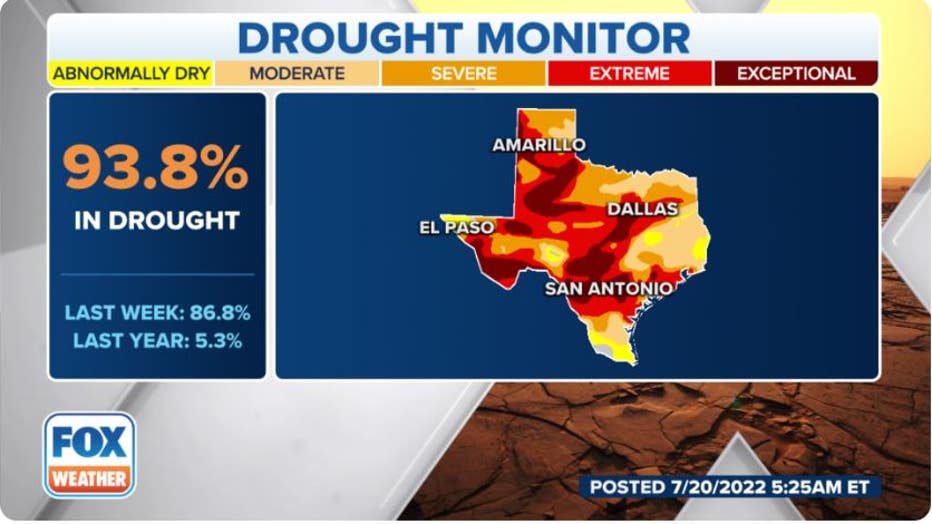 A majority of Texas is also facing extreme drought conditions.

"Last year at this time, roughly 5 percent only of the entire massive state was in drought," Ray said. Today, we’re approaching 94 percent of drought in Texas over the lack of rain and the beating-down heat."

This is a significant jump from last week, when 86.8% of the state was experiencing a drought.

KEEPING YOUR FURRY FRIEND SAFE AND HEALTHY AS TEMPERATURES RISE

The summer scorcher has also moved into the Northeast, where millions of Americans along the East Coast and along the I-95 corridor from Philadelphia to New York City and Providence, Rhode Island to Boston are under heat alerts.

"We've been talking all along about the fact that for the Northeast, things have been cooler for the summertime," FOX Weather meteorologist Jason Frazer said. "It seems like Mother Nature finally got the message."

WHERE DID THE' DOG DAYS OF SUMMER' COME FROM? 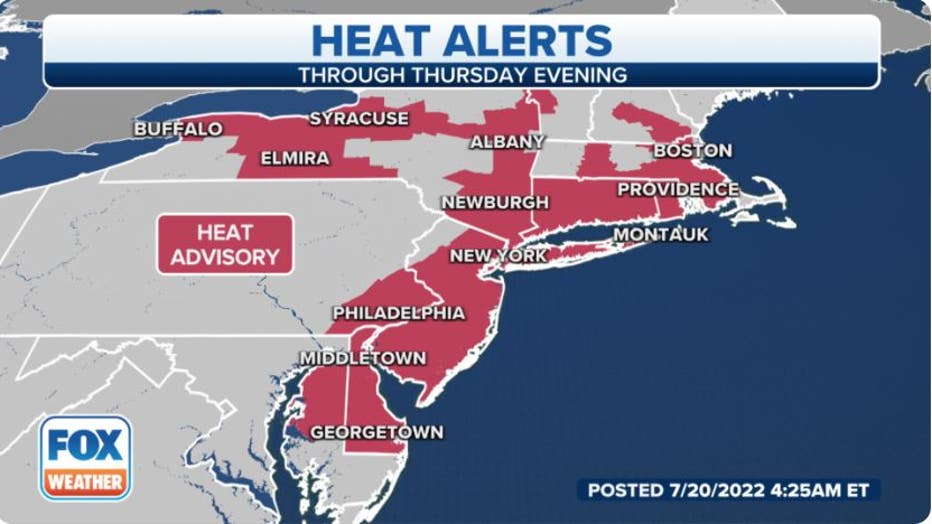 Heat alerts are in effect in the Northeast and New England.(FOX Weather)

The Heat Advisories extend from parts of Maryland and Delaware north into interior New York State and New England.

Temperatures across the region will generally be in the upper 80s to mid-90s on Wednesday afternoon.

Richmond, Virginia and Washington will both be around 94 degrees during the afternoon. New York City will be one degree warmer at 95 degrees. 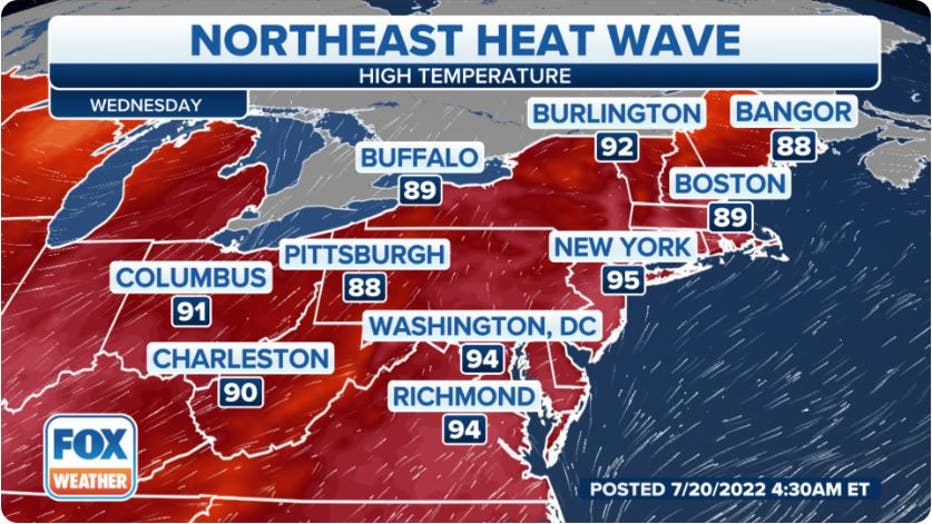 Boston will get close to 90 degrees, and to the north in Bangor, Maine, it's expected to reach 88 degrees.

It will also be hot in northern New England, with Burlington, Vermont, hitting 92 degrees on Wednesday afternoon.

Some areas may even close in on high temperature records Wednesday. 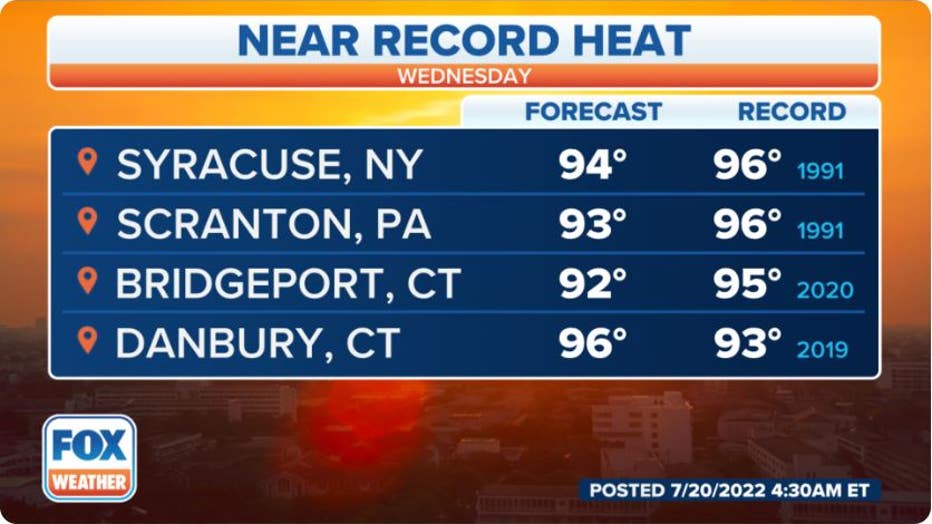 Record-breaking heat is expected in the Northeast on Wednesday.(FOX Weather)

Syracuse, New York, is expected to challenge its old record high temperature of 96 degrees set in 1991.

Danbury, Connecticut, is expected to break its old record of 93 degrees set back in 2019, with a high temperature on Wednesday of 96 degrees.

The humidity will also play a role in the Northeast and New England on Wednesday. Widespread heat index readings at or near 100 degrees are expected, including New York City, Washington and Richmond. 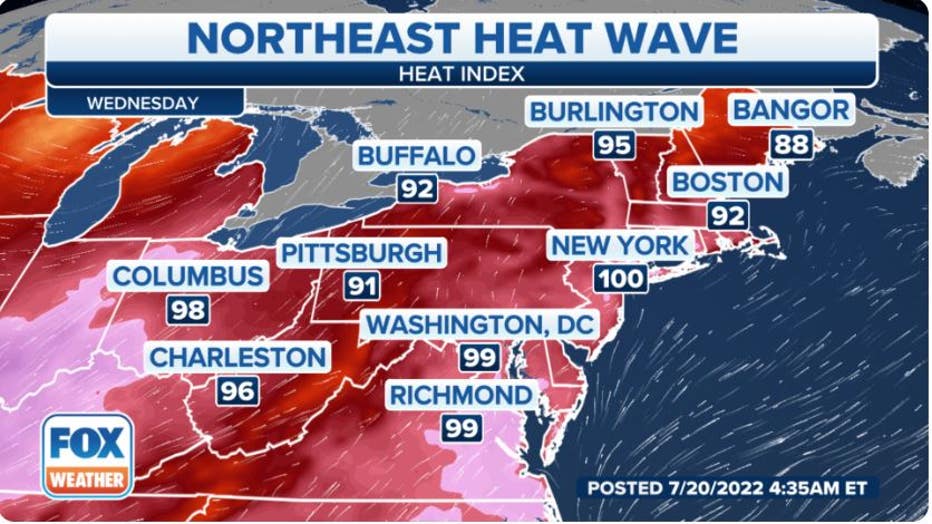 Boston, which sits closer to the coast, will feel like it's about 92 degrees. 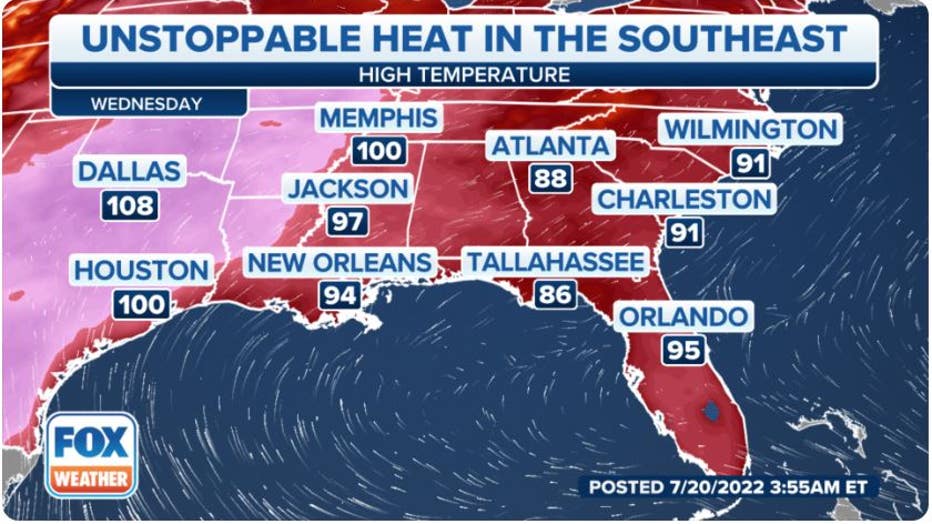 While not as hot as the southern Plains, the Southeast will also feel the heat on Wednesday.

High temperatures will generally be in the upper 80s to mid-90s across the region.

7 THINGS TO KNOW ABOUT SUNSCREEN

Orlando, Florida, will be baking at 95 degrees, so anyone enjoying time at one of the area's theme parks, make sure to drink plenty of fluids and try to stay in the shade or indoors if possible.

Even along the coast, from Charleston, South Carolina, to Wilmington, North Carolina, temperatures will be in the low 90s.

WHEN SECONDS MATTER: CHILDREN EXPERIENCE HEATSTROKE SYMPTOMS WITHIN MINUTES OF BEING IN A HOT CAR 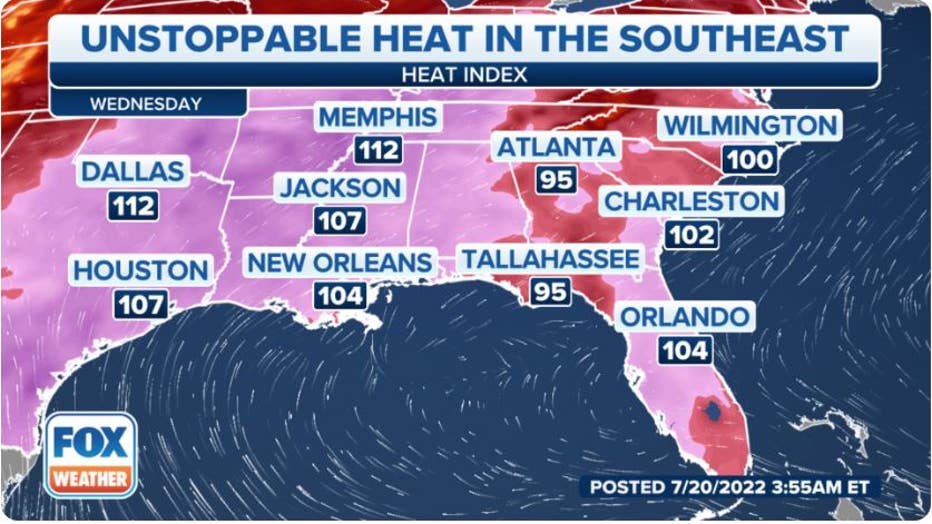 Like in the southern Plains, the humidity will make the Southeast feel much hotter.

Heat index values higher than 100 degrees are expected across the area.

Orlando will feel like it's 104 degrees, and those triple-digit values will also be felt along the coast.

Atlanta, too, will feel the heat, with a heat index value of 95 degrees expected.

STOP THE WASTE AND SAVE YOUR WALLET: BUDGET-FRIENDLY WAYS TO KEEP COOL DURING HEAT WAVES 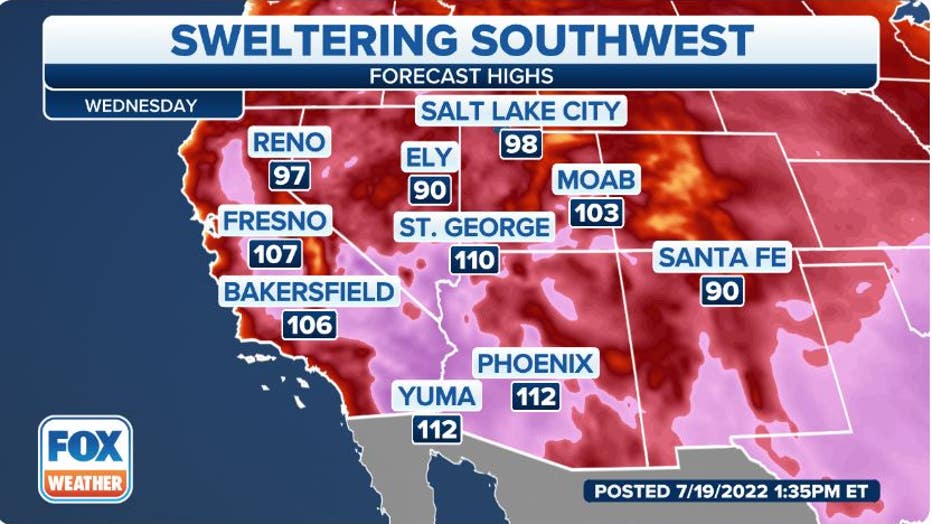 High temperatures in the Southwest on Wednesday, July 20.(FOX Weather)

The Southwest will also be sizzling – even a little more than usual for the heart of summer.

Phoenix and Yuma, Arizona, are expected to be around 112 degrees during the afternoon - about 3-5 degrees above average.

Above-average temperatures are also expected in California, where Bakersfield will see a high temperature around 106 degrees and Fresno one degree hotter at 107.

Scorching temperatures will also extend into the Four Corners region. Moab, Utah, will see a high temperature of around 103 degrees.

WHAT IS THE HEAT INDEX AND WHY IS IT IMPORTANT TO YOUR HEALTH?

And it's not only the United States that's feeling the heat. The United Kingdom recorded its hottest record of all time on Tuesday while firefighters worked tirelessly to contain several fires that broke out in the extreme heat.

The best time to go outdoors during a hot summer day is in the early morning or late in the evening, when temperatures tend to be cooler than during the afternoon.

If you need to go outdoors during the heat of the day, experts advise you to wear loose, light-colored clothing and drink plenty of fluids.

The dangerous heat can make vehicles deadly for anyone left inside without air conditioning running. Make sure to "look before you lock" to ensure you have not left any children or pets unattended.