Several fires have erupted as protests continue in the District

WASHINGTON (FOX 5 DC) - Mayor Muriel Bowser placed a citywide curfew across the District as demonstrators near the White House gathered during a third straight night of protests Sunday over the death of George Floyd in Minneapolis.

Among the turmoil across the United States: Fires lit near the White House, including at St. John's Church just a short walk away; rioters clashing with police in New York City; and the Los Angeles County sheriff saying people still out on the streets were "acting like terrorists."

The National Guard’s top general on Sunday said Guard units in nearly half of U.S. states have been mobilized to help major cities deal with the riots. Gen. Joseph Lengyel said some 16,000 additional Guard troops have been deployed to 24 states and the District of in response to civil disturbances. 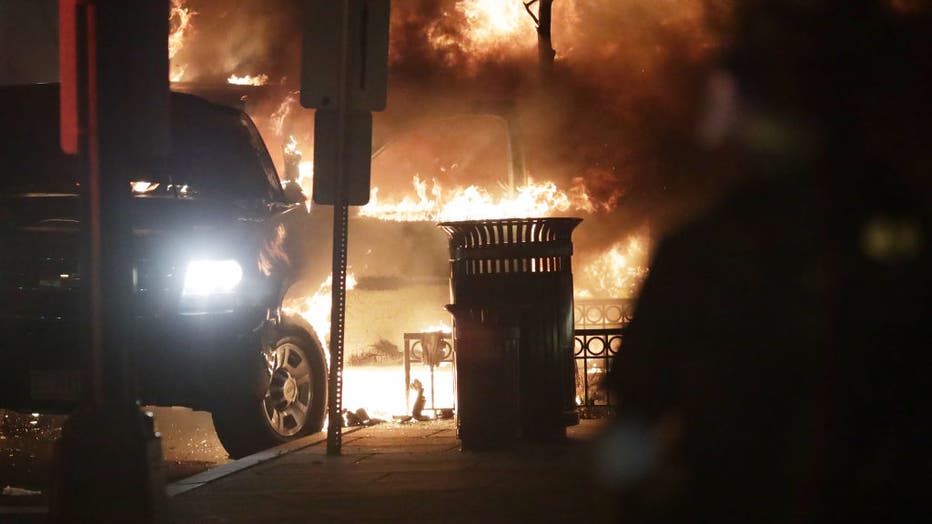 WASHINGTON, DC - MAY 30: Fires burn near the White House during protests caused by caused by the killing of George Floyd on May 30, 2020 in Washington, DC. Former Minneapolis police officer Derek Chauvin was arrested for Floyd's death and is accused

Hundreds of people converged on the White House and marched along the National Mall, chanting “Black Lives Matter,” “I can’t breathe” and “No justice, no peace.”

An emergency alert rang out on mobile devices across the nation's capital Sunday evening, alerting residents of the curfew.

Protesters Saturday night threw water bottles, traffic cones, scooters, even tear gas cans at police lines. They set fire to a car and a trash bin and smashed windows, including at Bay Atlantic University. “What are you doing? That’s a school,” one man yelled.

An American flag hanging at the Export-Import Bank was taken down, burned and replaced with a Black Lives Matter banner.

The D.C. demonstration was one of several around the country responding to the death of Floyd, a black man who died in police custody.

Trump appeared to cheer on the tougher tactics being used by law enforcement to disperse protesters Saturday night. He commended National Guard troops deployed in Minneapolis, declaring “No games!” and he also said police in New York City “must be allowed to do their job!”

“Let New York’s Finest be New York’s Finest,” Trump said on Twitter after returning to the White House from Florida, where he watched the launch of a SpaceX rocket. He did not talk to reporters upon his return and it was not clear if he could hear the protest over the sound of his helicopter. But for at least part of the flight, televisions on Air Force One were turned to Fox News and its coverage of the protests.

Earlier in the day, he had belittled the protesters and pledged to “stop mob violence.”

“I stand before you as a friend and ally to every American seeking justice and peace, and I stand before you in firm opposition to anyone exploiting this tragedy to loot, rob, attack and menace,” the president said after watching the launch of a SpaceX rocket. “Healing, not hatred, justice, not chaos, are the missions at hand.”

Police were in tactical gear. The D.C. National Guard was activated at the direction of the secretary of the Army and at the request of the Park Police to help maintain order near the White House, Commanding Gen. William J. Walker said in a post on the Guard’s Facebook page.

“We’re sick of it. The cops are out of control,” protester Olga Hall said. “They’re wild. There’s just been too many dead boys,” she said.

Some vocal protesters directed their comments at a black police officer. “Do you support this violence?” they asked him. “How are you going to protect your kids?” The officer got emotional to the point he had to be relieved.

An activist wearing a Black Lives Matter T-shirt put himself between police and the protesters and yelled, “Stop. This is what they want.”

Speaking over a megaphone earlier in the evening, Cameron McCall said, “We don’t need violence. All we need are our voices.”

While some protesters stayed near the White House, others marched through the streets chanting, “No justice and no peace.” and “Say his name: George Floyd.” The mood was angry and several speakers implored marchers to remain peaceful. 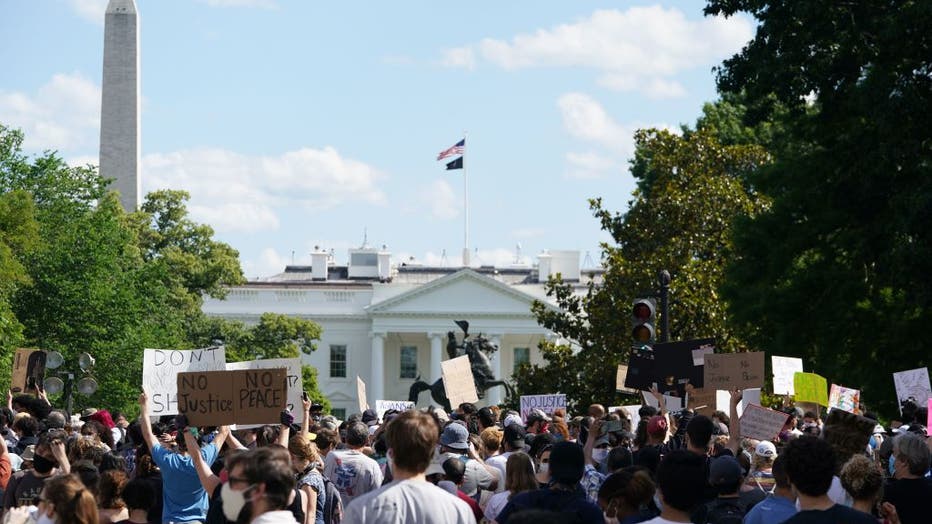 Demonstrators gather to protest the death of George Floyd, near the White House on May 31, 2020 in Washington, DC. - Thousands of National Guard troops patrolled major US cities after five consecutive nights of protests over racism and police brutali

The march paused between the the Washington Monument and the National Museum of African American History and Culture. Demonstrators sat down in the street for a moment of silence lasting for the eight minutes or more that the Minneapolis police officer reportedly knelt on Floyd’s neck.

At the Lincoln Memorial, one organizer spoke over a megaphone. “Look to the left and to the right and thank that person. We can’t hug anybody because of COVID, but I love you anyway.” Many of the protesters wore masks, but did not socially distance themselves.

Another group circled through the Capitol Hill neighborhood for at least an hour in cars, honking. A helicopter hovered overhead.

WATCH FOX 5 ON YOUR MOBILE DEVICE

In a series of tweets earlier Saturday, Trump doubted protesters’ allegiance to Floyd’s memory, saying they were “professionally managed.” He offered no evidence to back his assertion, and the president even seemed to invite supporters to make their presence felt: “Tonight, I understand, is MAGA NIGHT AT THE WHITE HOUSE???”

Trump later rejected the suggestion that he was stoking a potential conflict between protesters and his supporters. “I was just asking. But I have no idea if they are going to be here,” he said. “MAGA is Make America Great Again. By the way, they love African American people. They love black people.”

At Saturday’s demonstration, there was no evidence of a counter-move by Trump supporters.

Trump said he had “watched every move” from inside the executive mansion during Friday’s protest and “couldn’t have felt more safe” as the Secret Service let the protesters carry on, “but whenever someone ... got too frisky or out of line, they would quickly come down on then, hard — didn’t know what hit them.”

The president also criticized the mayors of Washington and Minneapolis.

Trump said Minneapolis Mayor Jacob Frey “is probably a very good person, but he’s a radical, left mayor.” He then described how he watched as a police station in the city was overrun. “For that police station to be abandoned and taken over, I’ve never seen anything so horrible and stupid in my life,” Trump said when speaking briefly to reporters at the White House.

He said Minnesota officials have to get tougher with rioters, and that by doing so they would be honoring the memory of Floyd.

The Secret Service said in a statement Saturday that six protesters were arrested in Washington and “multiple” officers were injured. There were no details on the charges or nature of the injuries. A spokesman for U.S. Park Police said their officers made no arrests, but several suffered minor injuries and one was taken to a hospital after being struck in the helmet by a projectile. 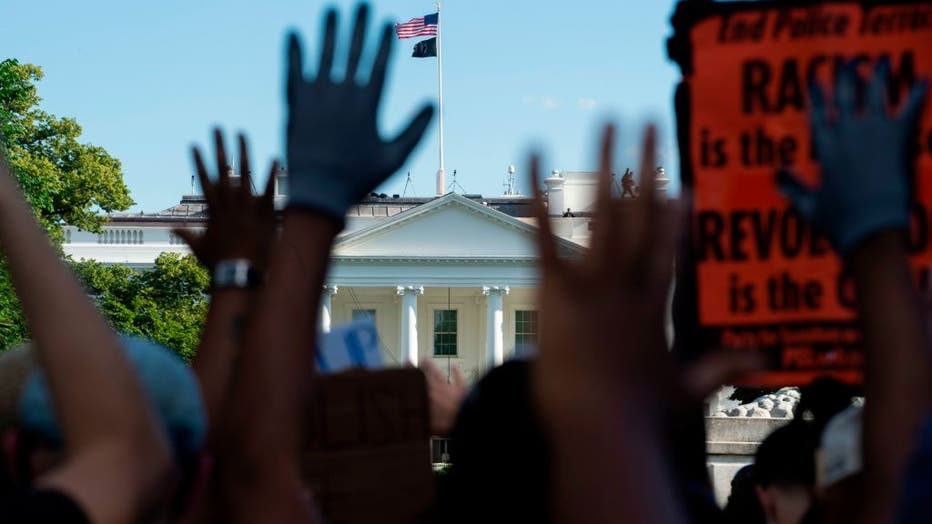 Demonstrators protesting the death of George Floyd hold their hands up near the White House on May 31, 2020 in Washington, DC. - Thousands of National Guard troops patrolled major US cities after five consecutive nights of protests over racism and po

Late Saturday and early Sunday, protesters vented their rage by breaking into tony shops of Georgetown, on the western edge of the District, and in downtown Washington, breaking windows and glass doors of many stores and looting some of them.

In his tweeting, Trump claimed that many Secret Service agents were “just waiting for action” and ready to unleash “the most vicious dogs, and the most ominous weapons, I have ever seen.” His reference to “vicious dogs” potentially being sicced on protesters revisits images from the civil rights movement when marchers faced snarling police dogs and high-pressure fire hoses.

In a news conference Saturday afternoon, Muriel Bowser, mayor of the nation’s capital, called Trump’s remarks “gross” and said the reference to attack dogs conjures up with the worst memories of the nation’s fight against segregation.

“I call upon our city and our nation to exercise restraint, great restraint, even as the president tries to divide us,” she said. “I feel like these comments are an attack on humanity, an attack on black America, and they make my city less safe.”

In contrast with the president’s tweets, the Secret Service said it “respects the right to assemble and we ask that individuals do so peacefully for the safety of all.”

Fox News and The Associated Press contributed to this report.