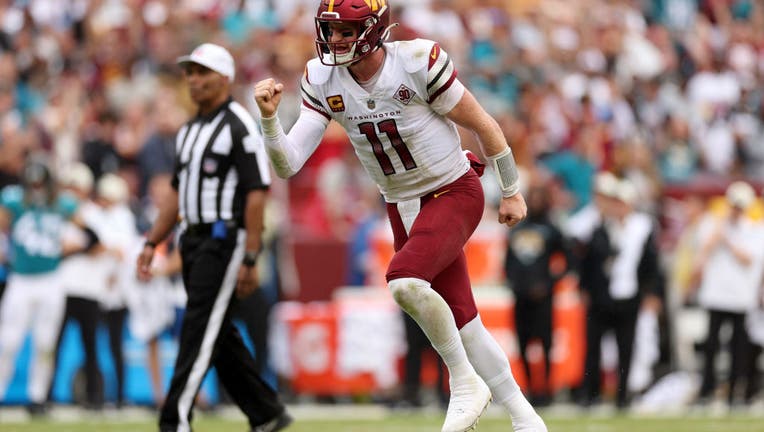 LANDOVER, MARYLAND - SEPTEMBER 11: Carson Wentz #11 of the Washington Commanders celebrates throwing a touchdown pass during the second quarter against the Jacksonville Jaguars at FedExField on September 11, 2022 in Landover, Maryland. (Photo by Patr

WASHINGTON - Carson Wentz bounced back from throwing interceptions on consecutive plays early in the fourth quarter, completing his third and fourth touchdowns to give Washington a 28-22 comeback victory against the Jacksonville Jaguars on Sunday in his debut for the team known as the Commanders.

It was his first four-TD game since the day he tore the ACL in his left knee while with the Philadelphia Eagles in 2017. And it came with former Eagles coach Doug Pederson on the sideline in charge of the Jaguars for the first time.

LANDOVER, MARYLAND - SEPTEMBER 11: Darious Williams #31 of the Jacksonville Jaguars tackles J.D. McKissic #23 of the Washington Commanders during the first half at FedExField on September 11, 2022 in Landover, Maryland. (Photo by Patrick Smith/Getty Images)

Wentz connected with Terry McLaurin on a 49-yard TD and then hit rookie Jahan Dotson in the end zone from 24 yards out to put the Commanders ahead with 1:46 left after they squandered an early lead. With fans chanting "Let’s go Redskins," Wentz engineered a 13-play, 90-yard drive that kept him from losing to the Jaguars in consecutive games following a similar two-turnover effort in Week 18 last year with the Indianapolis Colts.

He finished 27 of 41 for 313 yards and produced enough points to make up for two bad mistakes on the interceptions.

Jaguars second-year QB Trevor Lawrence was intercepted with 1:10 to go, ending any chance of a comeback by the team that was last in the league each of the past two seasons. Lawrence was 24 of 42 for 275 yards, a touchdown pass to James Robinson and the pick. Robinson also ran for a touchdown. 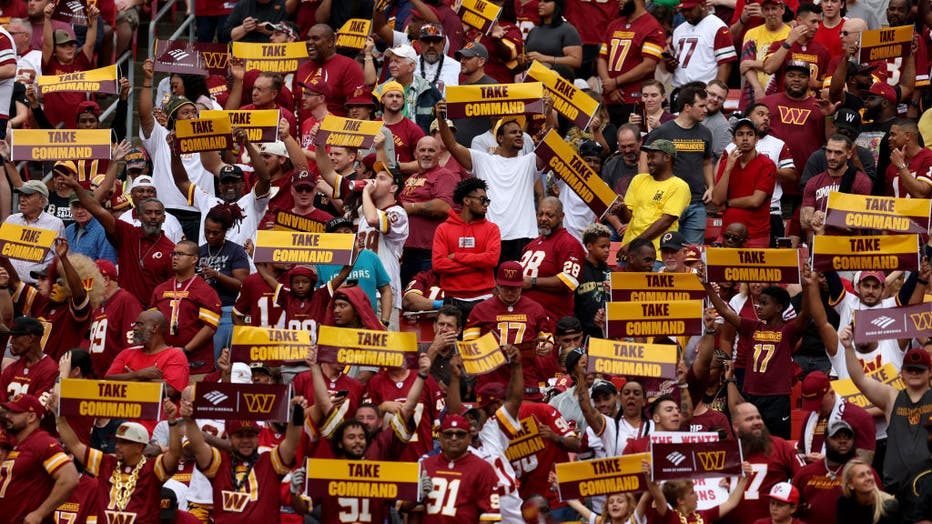 LANDOVER, MARYLAND - SEPTEMBER 11: A general view of fans during the game between the Jacksonville Jaguars and the Washington Commanders at FedExField on September 11, 2022 in Landover, Maryland. (Photo by Rob Carr/Getty Images)

The Commanders will visit Detroit next Sunday to take on the Lions.