Experts say you shouldn’t be worried about an influx of snakes once Brood X arrives.

WASHINGTON (FOX 5 DC) - D.C., Maryland and Virginia will soon be filled with the sounds of cicadas, and while many of you may view the insects as pests, those are snacks for some venomous snakes like copperheads.

People in the area are worried the the sudden emergence of the cicadas will cause an increase in copperheads.

Wildlife expert John Kleopfer with the Virginia Department of Wildlife Resources says you won't be running into loads of copperhead snakes that are only coming out to feast on the soon-to-emerge cicadas.

He said that is a myth. 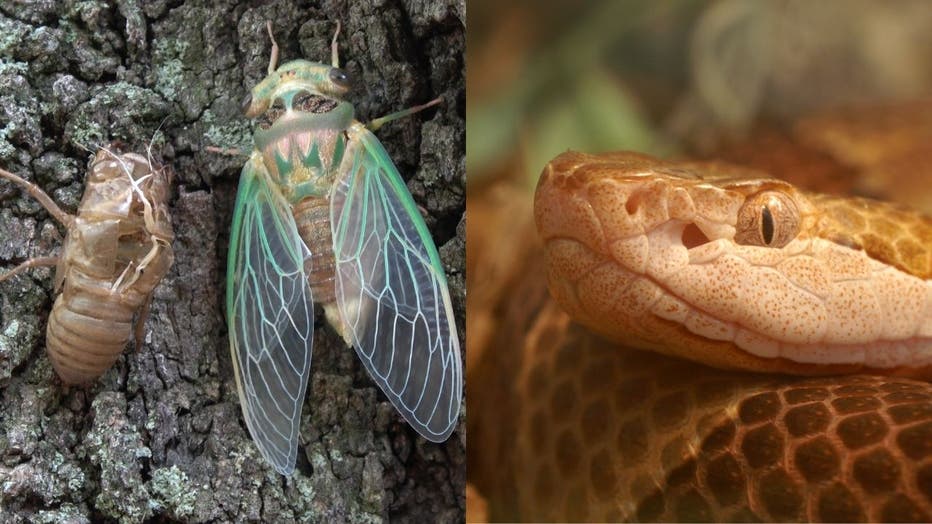 "We have no evidence that this 17 year eruption of cicadas is correlated to an increase in copperhead population—that is purely speculation and absolutely zero evidence to support that narrative," said Kleopfer.

FOX 5 started looking into whether cicadas will cause more copperhead snakes to come out after we noticed that people around the DMV were sort of panicking about it and discussing it on social media.

If you think you've already seen some cicadas in your yard, you very well may have.

For example, people in Arlington, Takoma park and parts of Maryland were asking questions if there are copperheads in their area.

One person responded saying that the copperheads like to sun on the rocks - and naturally, that fueled more comments from other people just being scared.

But the expert says there is no need to create such panic.

The snakes are native to the eastern southeaster part of the country and are found in all counties.

They can show up in wooded residential areas, but seeing them in heavily urban areas with little tree cover is uncommon.