Bradley Beal out of Olympics for health and safety reasons

U.S. Olympic guard Bradley Beal of the Washington Wizards will miss the Tokyo Olympics after being placed into health and safety protocols and the U.S. men’s basketball team said it will replace him on its roster at a later date.

U.S. Olympic guard Bradley Beal of the Washington Wizards will miss the Tokyo Olympics after being placed into health and safety protocols and the U.S. men’s basketball team said it will replace him on its roster at a later date.

The Americans also announced Thursday that forward Jerami Grant has also been played in health and safety protocols "out of an abundance of caution."

Additionally, the U.S. men's basketball game against Australia set for Friday has been canceled because of health and safety protocols.

BRADLEY BEAL SELECTED TO THE US OLYMPIC MEN’S NATIONAL TEAM

Beal was set to be tested multiple times in the coming days, according to the person who spoke Wednesday to The Associated Press on condition of anonymity. The results of those tests determined his status on the roster, the person said.

"A member of the USA Basketball Men's National Team has been placed under USA Basketball's health and safety protocols," the federation announced in a statement Wednesday afternoon, without identifying the player involved. 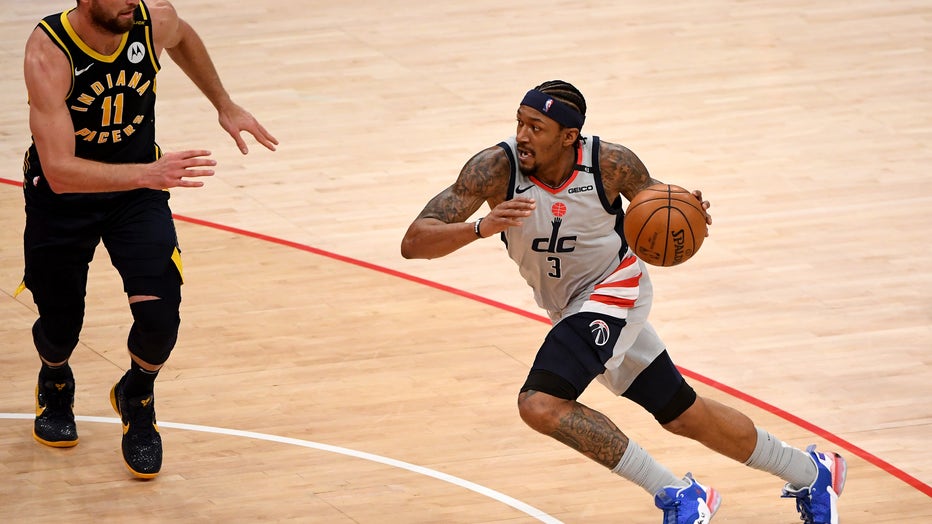 WASHINGTON, DC - MAY 20: Bradley Beal #3 of the Washington Wizards dribbles in front of Domantas Sabonis #11 of the Indiana Pacers during the first half at Capital One Arena on May 20, 2021 in Washington, DC. NOTE TO USER: User expressly acknowledges

USA Basketball could still replace Beal before heading to Tokyo. The Americans picked their 12-man team last month but noted that it may change if necessary.

Players, and their family members, in Las Vegas have been tested daily during their training camp there. Many have family with them now since those loved ones will not be allowed to travel to Tokyo for the Olympics because of virus-related restrictions there. Mask-wearing has been required and many of the same rules and policies that players had to adhere to during the NBA season has carried over to the U.S. camp.

Tokyo was going to be Beal's first time as an Olympian. The U.S. doesn't play a game in the Olympics until July 25 against France.

"It was easy decision for me," Beal said after Monday's win, appearing at a press conference without a mask -- but walking into the room with one on, and placing it back on before getting up to exit the room. "I've always wanted to be a part of the Olympic team and be on this stage and have the opportunity to represent my country. 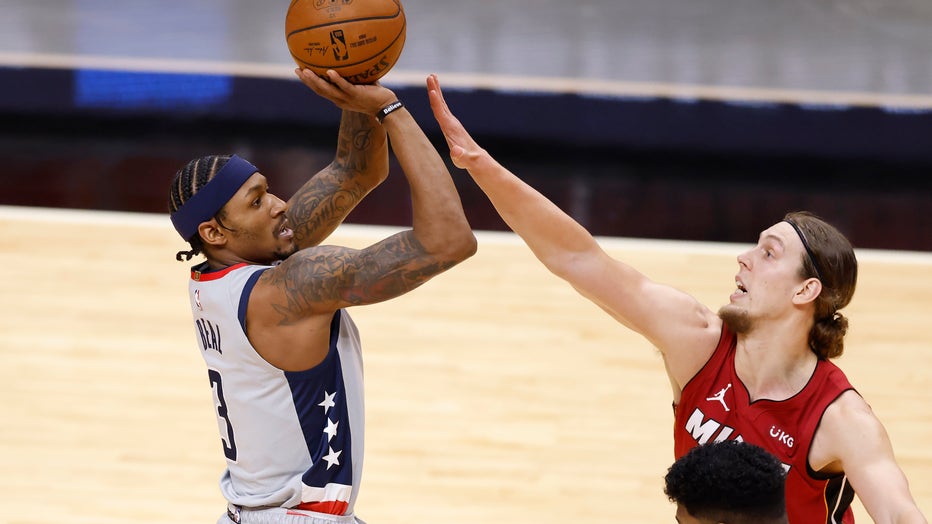 MIAMI, FLORIDA - FEBRUARY 03: Bradley Beal #3 of the Washington Wizards shoots over Kelly Olynyk #9 of the Miami Heat during the first quarter at American Airlines Arena on February 03, 2021 in Miami, Florida. NOTE TO USER: User expressly acknowledge

"Ultimately, you know, this is fun," Beal added. "This is something you want to be a part of and you realize not every player has that opportunity or blessing to play on this team. For me, it was a no-brainer."

Meanwhile, Tokyo reported its highest number of new COVID-19 cases in almost six months on Wednesday -- a bad sign with the Olympics set to open in just over a week. The 1,149 new cases reported in Tokyo on Wednesday was the highest one-day total since Jan. 22, and numbers have been surging in the Olympic host city for nearly a month.

Japanese Prime Minister Yoshihide Suga and International Olympic Committee President Thomas Bach have both pledged that the Tokyo Olympics will be "safe and secure," amid a government-mandated state of emergency in and around much of the Tokyo area.

USA Basketball now has one more exhibition remaining, on Sunday against Spain. The team is scheduled to fly to the Olympics on Monday.

With Beal out, the Americans are down to eight of their 12 players. The other three not in Las Vegas with the team -- Khris Middleton, Jrue Holiday and Devin Booker -- are at the NBA Finals with Milwaukee and Phoenix.