Unable to leave his house, Quinn started receiving visitors on the front lawn whom he could talk to through his front window.

WEYMOUTH, Mass. - A 3-year-old boy, who is battling brain cancer and has spent the summer stuck inside his house in isolation, has managed to stay connected to the outside world through his front window.

Quinn Waters has met famous athletes, watched a private concert by Dropkick Murphys and been entertained by jugglers, superheroes and Irish dancers — all on his front lawn.

“It’s been amazing, the outpouring,” his father, Jarlath Waters, said. “People come from all over the place.”

Quinn was diagnosed in February with medulloblastoma the day after his third birthday. Before the diagnosis, Quinn’s parents noticed subtle symptoms. He started covering one of his eyes while watching television, his balance was off, and he felt nauseous.

Quinn had a tumor on his brain stem, which was the size of a lime, Jarlath said. Doctors were able to remove 95 percent of it. 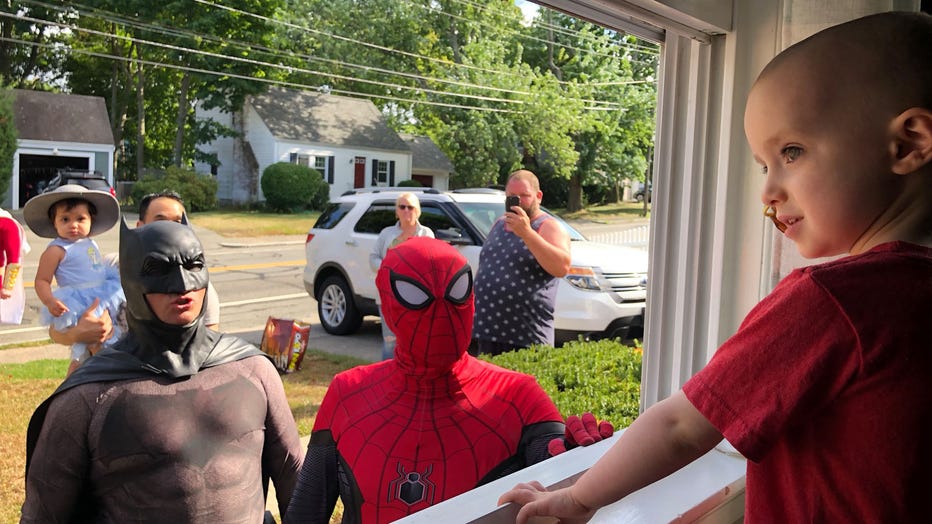 Superheroes, including Batman and Spiderman, arrive outside of Quinn Waters’ window on Aug. 25, 2019. (Photo credit: The Mighty Quinn / Facebook)

Nicknamed “The Mighty Quinn,” the boy has since gone through several rounds of chemotherapy, received a stem cell transplant and spent months in the hospital.

As a result of his treatment, Quinn’s natural immunity was wiped out, his father explained. He came home in June and was given a 90-day isolation period by his doctors.

Unable to leave his house, Quinn started receiving visitors on the front lawn whom he could talk to through the window. It started with family members and friends stopping by to cheer him up, his father said. Quinn’s mother works as a police officer, and her department came by on a motorcycle unit.

“They posted that on their Facebook page, and that morning, we got calls from four or five different news agencies in the area. After that, it started to grow,” Jarlath explained.

Soon, the SWAT team visited Quinn through his “Quinn-dow,” as well as the local Weymouth Fire Department.

“People started asking what they could do. They were trying to figure out different ways to put a smile on his face,” his father said. “It ended up snowballing into these big productions.”

A theater group and a juggling act showed up. Quinn’s older sister performs with an Irish dance school, and the school did a performance on the front lawn for him.

The Celtic punk band Dropkick Murphys, who started in Massachusetts, sang to the boy through his window. New England Patriots stars Tom Brady and Stephon Gilmore and Boston Bruins player Charlie Coyle have all offered the 3-year-old their well-wishes.

“You, my friend, are a champion,” Brady said in a video on Instagram.

From ice cream trucks to famous faces, to neighbors just stopping by to say hello, Quinn’s front lawn has become a stage that lets him socialize and stay entertained while he’s forced to live in a bubble.

“The fact that there’s so much bad news, you see something like this and everybody wants to get on board with it. No one wants to see a little kid be sick,” his father said. “Every single person who has shown up has done wonders for him.”

His parents are scheduled to meet with an oncologist in mid-September to discuss the status of Quinn’s isolation period, Jarlath said.

“He’s probably met more people in the last three months than most 3-year-olds meet in their entire life,” Jarlath said. “He’s such a chatty little kid too. He’d sit there and talk to people for hours if he could.”

A blood drive in Quinn’s honor is being held Sept. 5 in his hometown of Weymouth. Those interested can sign up and use the sponsor code MIGHTY.