WASHINGTON - President Joe Biden is set to speak at the White House on Wednesday to discuss the administration’s efforts to combat inflation for everyday costs, strengthen the nation’s supply chain and ensure well-stocked shelves ahead of the busy holiday season.

The president was originally meant to make these remarks Monday afternoon but had to reschedule.

As millions of Americans prepare for the holidays, supply chain backlogs could be a giant stumbling block for families trying to return to a sense of normality.

On top of supply chain woes, inflation on gas prices, meat and other everyday items are putting the squeeze on Americans’ wallets.

On Monday, the president hosted a roundtable with CEOs from Walmart, CVS and others and discussed their efforts to alleviate supply chain backlogs ahead of the holidays.

Many of the business leaders present at the meeting said despite the backlog, their inventory has remained strong.

Leaders explained that planning and forecasting helped keep store shelves stocked in time for Thanksgiving and they will continue to do so up until the Christmas holiday.

During the meeting, Biden said consumer spending was headed toward pre-pandemic levels, according to Black Friday sales data.

"Early estimates are that Black Friday sales were up nearly a third since last year, and in-store sales were up by even more than that," Biden said.

Similar reports were coming out of the small business sector as well, according to Biden, but those numbers have yet to come in, he added.

Despite the positive outlook from big businesses on the upcoming holiday shopping season, increased prices loom over necessary products such as gas.

Last week, Biden ordered a record 50 million barrels of oil released from America’s strategic reserve, aiming to bring down gasoline and other costs, in coordination with other major energy-consuming nations including India, the United Kingdom and China.

The U.S. action was focused on helping Americans cope with higher fuel and other prices ahead of Thanksgiving and winter holiday travel. Gasoline prices are at about $3.40 a gallon, more than 50% higher than a year ago, according to the American Automobile Association.

"While our combined actions will not solve the problems of high gas prices overnight, it will make a difference," Biden promised in remarks at the White House. "It will take time, but before long you should see the price of gas drop where you fill up your tank." 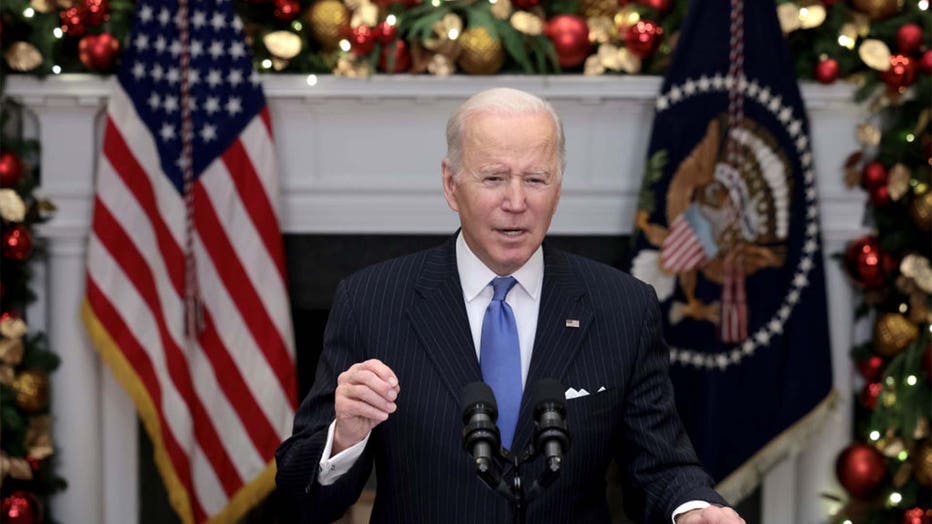 FILE - U.S. President Joe Biden delivers remarks on the Omicron COVID-19 variant following a meeting with his COVID-19 response team at the White House on Nov. 29, 2021 in Washington, DC.

Meanwhile, nearly two years into the COVID-19 pandemic, the economic impact of the crisis is still being felt even after countries raced out of debilitating lockdowns and consumer demand rebounded. Now, another surge of infections and a new coronavirus variant, omicron, are leading countries to tighten their borders and impose other restrictions, threatening the global economic recovery.

The omicron variant of the novel coronavirus has raised new fears that factories, ports and freight yards could be forced to close temporarily, putting more strain on global commerce and sending prices even higher.

Inflation is not just a rising issue in the United States. Globally, rising consumer prices fueled by high energy costs and supply disruptions are putting a pinch on households and businesses.

"We’ve noticed that we’re consuming less," Gabor Pardi, a shopper at an open-air food market in Hungary’s capital, Budapest, said after buying a sack of fresh vegetables recently. "We try to shop for the cheapest and most economical things, even if they don’t look as good."

The economic reverberations are hitting central and Eastern Europe especially hard, where countries have some of the highest inflation rates in the 27-nation European Union and people are struggling to buy food or fill their fuel tanks.

In an attempt to stave off economic catastrophe, wealthy countries — most notably the United States — introduced trillions of dollars worth of government aid, an economic mobilization on a scale unseen since World War II. Central banks also slashed interest rates in a bid to revive economic activity.

But those efforts to jump-start economies have had unintended consequences: as consumers felt more emboldened to spend the money they had received through government assistance or low-interest borrowing, and vaccine rollouts encouraged people to return to restaurants, bars and shops, the surge in demand tested the capacity of suppliers to keep pace.

Ports and freight yards were suddenly clogged with shipments, and prices began to rise as global supply chains seized up — especially as new outbreaks of COVID-19 sometimes shut down factories and ports in Asia.

The rise in prices has been dramatic. The International Monetary Fund predicts that world consumer prices will rise 4.3% this year, the biggest jump since 2011.

It is most pronounced in the developing economies of central and Eastern Europe, with the highest annual rates recorded in Lithuania (8.2%), Estonia (6.8%) and Hungary (6.6%). In Poland, one of Europe’s fastest-growing economies, inflation came in at 6.4% in October, the highest rate in two decades.