President Biden fielded questions from the G20 summit in Rome, Italy on Oct. 31.

ROME (AP) - President Joe Biden wrapped up his time at the Group of 20 summit on Sunday trying to convince Americans and the wider world that he’s got things under control — and taking Russia, China and Saudi Arabia to task for not doing enough to deal with the existential threat of climate change.

Biden's overall take on his efforts: On climate change, he’s got $900 billion planned for renewable energy, and Congress will vote this coming week. On supply chains, he has plans to make the ports run better and tamp down inflation. For workers, he’s building an economy with pay raises. On diplomacy, world leaders trust him.

But he also acknowledged what he can’t yet achieve: bringing Russia, China and Saudi Arabia to the table with the broader international community to limit carbon emissions and move to renewable energy.

RELATED: Thanksgiving dinner may be more expensive as holiday staples in short supply

In a news conference Sunday, the U.S. president spelled out his belief that all politics is personal and that what progress was achieved at the Rome summit came from direct interactions with other leaders.

"They know me. I know them," Biden said of his fellow G-20 leaders. "We get things done together." 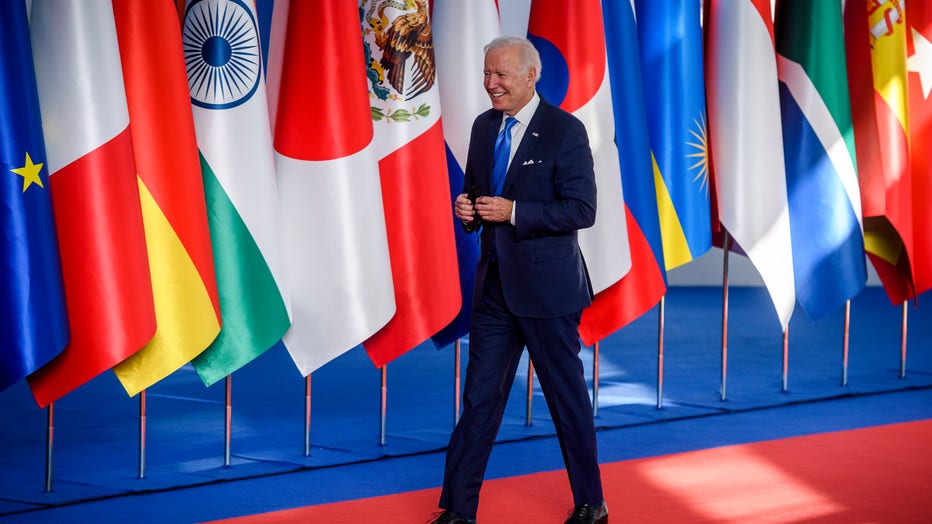 President Joe Biden arrives for the welcome ceremony on the first day of the Rome G20 summit, on Oct. 30, 2021 in Rome, Italy. (Photo by Antonio Masiello/Getty Images)

For all the challenges confronting him, the president attempted to stay optimistic. As Biden departed the news conference, he offered a thumbs up when asked if West Virginia Sen. Joe Manchin and Arizona Sen. Kyrsten Sinema — key Democratic votes — were on board with his $1.75 trillion spending package for families, health care and renewable energy. The president also shrugged off his recent decline in the polls, saying that numbers go up and down.

As for the potential significance of Biden's thumbs-up on congressional negotiations, White House deputy press secretary Karine Jean-Pierre, said, "As the President said during the press conference, he is confident we are going to get this done and the thumbs up was simply a visual restatement of that."

But the policy issues also seemed to fade for Biden when asked about his time Friday with Pope Francis. The president became deeply emotional, his hands appearing to fiddle with the mask he wore as a precaution because of COVID-19. He spoke of how the pope comforted the Biden family in a Philadelphia airport hangar after the death of his son, Beau, in 2015.

"When I won, (Pope Francis) called me to tell me how much he appreciated the fact that I would focus on the poor. focus on the needs of people who are in trouble," Biden said. "He is everything I learned about Catholicism from the time I was a kid going from grade school to high school."

The president did leave the G-20 with commitments by his fellow leaders on a global minimum tax that would make it harder for large companies to avoid taxes by assigning their profits to countries with low tax rates. He announced new funding to improve ports and shipping, in addition to a conference next year on supply chains. He patched up differences with the European Union on tariffs and differences with France on the sale of a nuclear-powered submarines to Australia.

The president met Sunday with Turkish President Recep Tayyip Erdogan, whose office said the meeting was held in a "positive atmosphere" despite tensions over human rights and Turkey's purchase of a Russian missile system, among other issues.

Biden heads Monday to the U.N. climate summit in Scotland, where he'll once again face questions about whether the world's wealthiest are doing enough to stop the warming of the Earth by moving away from fossil fuels. The president on Sunday dismissed the contradiction that he's fighting for climate change while also asking oil-rich countries to increase their production in order to lower gasoline prices for U.S. commuters.

"The idea that we’re not going to need gasoline for automobiles is just not realistic," Biden said. "It has a profound impact on working-class families, just to get back and forth to work. So I don’t see anything inconsistent with that."