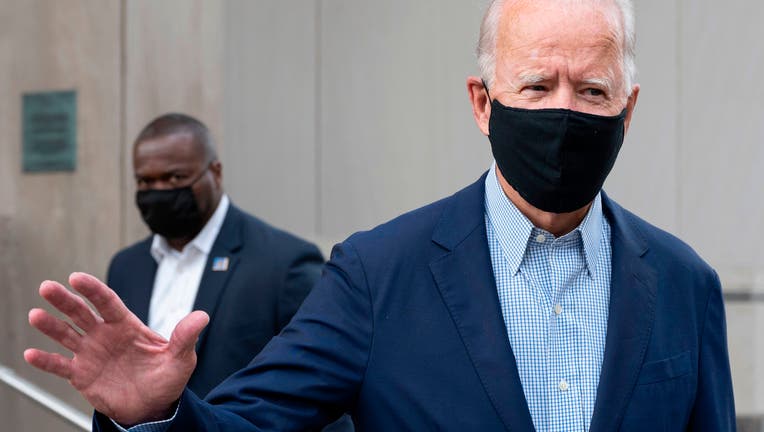 Democratic presidential candidate Joe Biden waves as he walks out of the Delaware State Building, after voting in the Delaware state primary in Wilmington, Delaware on September 14, 2020.

WASHINGTON - Joe Biden faces a decision unlike any other incoming president: whether to back a short-term national lockdown to finally arrest a raging pandemic.

For now, it’s a question the president-elect would prefer to avoid. In the week since he defeated President Donald Trump, Biden has devoted most of his public remarks to encouraging Americans to wear a mask and view the coronavirus as a threat that has no regard for political ideology.

But the debate has been livelier among members of the coronavirus advisory board Biden announced this week. One member, Dr. Michael Osterholm, suggested a four- to six-week lockdown with financial aid for Americans whose livelihoods would be affected. He later walked back his remarks and was rebutted by two other members of the panel who said a widespread lockdown shouldn’t be under consideration.

That’s a sign of the tough dynamic Biden will face when he is inaugurated in January. He campaigned as a more responsible steward of America’s public health than President Donald Trump is and has been blunt about the challenges that lie ahead for the country, warning of a “dark winter” as cases spike.

But talk of lockdowns are especially sensitive. For one, they’re nearly impossible for a president to enact on his own, requiring bipartisan support from state and local officials. But more broadly, they’re a political flashpoint that could undermine Biden’s efforts to unify a deeply divided country.

“It would create a backlash,” said Dr. Amesh Adalja, a senior scholar at the Johns Hopkins Center for Health Security who added that such a move could make the situation worse if people don’t comply with restrictions. “Lockdowns can have consequences that diminish the value of such an approach.”

During his first public appearance since losing the election, Trump noted on Friday that he wouldn’t support a lockdown. The president, who has yet to publicly acknowledge Biden’s victory, would likely reinforce that message to his loyal supporters once he’s left office.

The coronavirus is blamed for 10.6 million confirmed infections and almost a quarter-million deaths in the U.S., with the closely watched University of Washington model projecting nearly 439,000 dead by March 1. Deaths have climbed to about 1,000 a day on average.

New cases per day are soaring, shattering records. The latest came Friday, when more than 184,000 people tested positive, according to data from Johns Hopkins University.

Several states are beginning to bring back some of the restrictions first imposed during the spring. But leaders in much of the country are proceeding with caution, aware that Americans are already fatigued by virus-related disruptions.

Indeed, after Osterholm made his comments, a number of Biden’s task force members went out to publicly disavow lockdown possibilities. Dr. Vivek Murthy, the former U.S. surgeon general who’s serving as one of the co-chairs on Biden’s coronavirus advisory board, said the group is looking at a “series of restrictions that we dial up or down” based on the severity of the virus in a given region.

“We’re not in a place where we’re saying shut the whole country down. We’ve got to be more targeted,” Murthy said on ABC’s “Good Morning America.” “If we don’t do that, what you’re going to find is that people will become even more fatigued. Schools won’t be open to children and the economy will be hit harder, so we’ve got to follow science, but we’ve also got to be more precise.”

Speaking on CNBC, Dr. Celine Grounder, an infectious-disease specialist at the NYU Grossman School of Medicine and another task force member, said that, “as a group, really the consensus is that we need a more nuanced approach.”

During the campaign, Biden pledged to make testing free and widely available; to hire thousands of health workers to help implement contact tracing programs; and to instruct the Centers for Disease Control and Prevention to provide clear, expert-informed guidelines to businesses, schools and local officials on reopening in regions where they’ve closed.

To prepare for possible surges in cases, he’d prepare Department of Defense resources to provide medical facility capacity, logistical support and doctors and other medical personnel if necessary. Biden would also use the Defense Production Act to ramp up production of masks, face shields and other personal protective equipment to help alleviate shortages at hospitals.

But Biden himself fueled some of the confusion about his stance on lockdowns during the campaign. He initially told ABC he would “listen to the scientists” if they advised him to shut down the country, and then took a more nuanced position.

“There’s going to be no need, in my view, to be able to shut down the whole economy,” he said at a town hall in September.

Even if a nationwide lockdown made sense, polling shows that Americans’ appetite for a closure waning. Gallup found that only 49% of Americans said they’d be “very likely” to comply with a monthlong stay-at-home order because of an outbreak of the virus. A full third said they’d be very or somewhat unlikely to comply with such an order.

Kathleen Sebelius, who was the health and human services secretary during the Obama administration, said Biden would be wise to keep his options open for now, especially as Trump criticizes lockdowns.

“It’s a very dicey topic” politically, she said. “I think wisely, the president-elect doesn’t want to get into a debate with the sitting president about some kind of mandate that he has no authority to implement.”