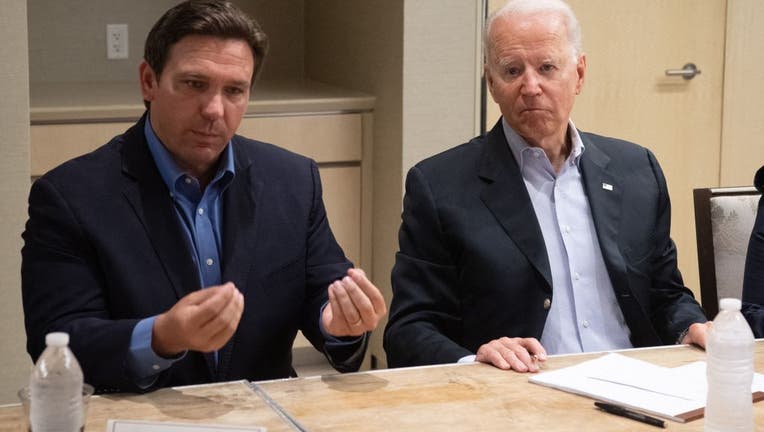 President Joe Biden alongside Florida Gov. Ron DeSantis (L) speaking about the collapse of the 12-story Champlain Towers South condo building in Surfside, during a briefing in Miami Beach, on July 1, 2021. (Photo by SAUL LOEB/AFP via Getty Images)

The Biden administration this week offered federal financial support to Florida school districts defying Gov. Ron DeSantis’ ban on mask mandates as the coronavirus surges in the state, according to reports.

U.S. Education Secretary Miguel Cardona wrote in a letter to DeSantis and state Education Commissioner Richard Corcoran on Friday that defiant districts that lose state funding would have federal funds available to them, according to Politico.

"Florida’s recent actions to block school districts from voluntarily adopting science-based strategies for preventing the spread of COVID-19 that are aligned with the guidance from the Centers for Disease Control and Prevention (CDC) puts students and staff at risk," Cardona wrote in the letter, adding he was "deeply concerned" by DeSantis’ July 30 anti-mask mandate executive order.

Cardona said the districts were in line with guidance from the CDC, which earlier this month recommended universal mask-wearing in K-12 schools, regardless of vaccination status, to slow the spread of the delta variant.

"We are eager to partner with [the Florida Department of Education] on any efforts to further our shared goals of protecting the health and safety of students and educators," he added. "If FLDOE does not wish to pursue such an approach, the Department will continue to work directly with the school districts and educators that serve Florida’s students."

Christina Pushaw, a DeSantis spokeswoman, called out the Biden administration for giving more support to "superintendents and elected politicians, who don’t believe that parents have a right to choose what’s best for their children, than on Florida’s students, which is what these funds should be used for," Politico reported.

Florida has one of the worst outbreaks in the country mostly due to the fast-spreading and highly contagious delta variant. In the last week, Florida and Texas accounted for 40% of the country’s virus hospitalizations and Florida has hit new record highs for case totals, the White House and reports said.

DeSantis has said parents should decide whether their children wear masks in school.

The letters mark the sharpest-yet pushback by the Biden administration to the state policies and come days after the president indicated he did not believe he had direct authority to overturn the governors’ actions.

Cardona sent a similar letter to Gov. Greg Abbott in Texas over his ban on mask mandates.