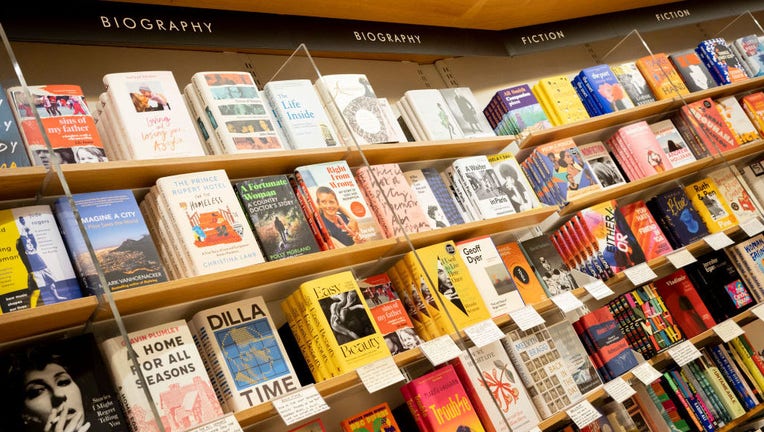 FILE IMAGE - Published titles fill the bookshelves in the Piccadilly branch of Waterstones bookshop on Jan. 7 2022, in London, England. (Photo by Richard Baker / In Pictures via Getty Images)

For avid readers, 2022 brought another year of great books.

Goodreads, a popular site and mobile app for book recommendations, holds an annual Goodreads Choice Awards, in which the best books are decided by readers.

There were 2022 winners across 17 categories, including a "landslide victory" for Jennette McCurdy’s "I’m Glad My Mom Died" in Best Memoir & Autobiography. Author Taylor Jenkins Reid — behind books like "The Seven Husbands of Evelyn Hugo" and "Daisy Jones and the Six" — won her third Best Historical Fiction award, while authors Emily Henry, V.E. Schwab, Alice Oseman, and Amanda Gorman each won for the second time.

Boy writes children's book about being born with 12 fingers

Wyatt Shield talks with FOX Television Stations about being a published author at 6 years old.

A total of 5.7 million votes were cast in the 14th Annual Goodreads Choice Awards, which was first launched in 2009.

"Seventeen categories! Seventeen winners! Seventeen incredible books! Sincere congratulations to all the nominees—thank you for giving us another year of great reading," Goodreads said of the awards.

Click to jump to a specific book genre below:

"Author Gabrielle Zevin brought a new kind of love story into the world with her universally admired novel about life, love, fame, failure, and video game design," according to Goodreads. "Tomorrow was also selected as Amazon Books Editors' book of the year and it’s going to be a movie, too—Zevin is currently working on the screenplay. Literary gamers, rejoice."

Best in Mystery & Thriller: "The Maid" by Nita Prose

Best in Historical Fiction: "Carrie Soto Is Back" by Taylor Jenkins Reid

"At age 37, former tennis champion Carrie Soto is back in the game to establish her legacy, defeat her young rival, and prove some things to herself and everyone else," according to Goodreads. "Author Reid is something of a regular in the Historical Fiction category, having won last year with Malibu Rising and in 2019 with Daisy Jones and the Six."

Best in Fantasy: "House of Sky and Breath" by Sarah J. Maas

"Fantasy queen Sarah J. Maas takes home her seventh Goodreads Choice Award and her third in a row in the category with House of Sky and Breath the latest in her popular Crescent City series," the book recommendation site says. "Angels! Demons! Adventure! Romance! Suspense! As a storyteller, Maas’ worldbuilding chops are elite. Bonus trivia: Maas began writing her first novel at age 16."

"In another encouraging triumph for literary sci-fi, Emily St. John Mandel takes home her first award for the year’s best book about time travel, lunar colonization, and Vancouver Island circa 1912," Goodreads says. "Well, the only book. But still. With stories like this and Station Eleven, Mandel is mapping new territories in 21st-century speculative fiction."

"Jason Rekulak’s innovative book features a nanny fresh from rehab, her young ward Teddy, his quickly improving drawing skills, and a kinda-maybe supernatural entity in the woods," the website says. "Teddy’s good, all right. Scary good. This is the first Goodreads Choice Award for Rekulak, who formerly ran his own indie press in Philadelphia."

Best in Humor: "The Office BFFs: Tales of The Office from Two Best Friends Who Were There" by Jenna Fischer and Angela Kinsey

"The American version of the British TV series The Office evolved into a Hall of Fame comedy in its own right. This behind-the-scenes dual memoir from series regulars Jenna Fischer (Pam!) and Angela Kinsey (Angela!) won over a huge readership with its wit and warmth and subsequent word-of-mouth recommendations," Goodreads says.

Best in Nonfiction: "Atlas of the Heart: Mapping Meaningful Connection and the Language of Human Experience" by Brené Brown (Author) and Gavin Aung Than (Illustrator)

"Author and researcher Brené Brown attempts to map the human heart itself with this inventive nonfiction project, which explores 87 of the emotions and experiences that make up a truly meaningful life," Goodreads explains."Brown’s work draws from multiple disciplines, and her proficiency with science and storytelling has put her at the center of the cultural conversation for years."

"Maybe the single biggest surprise success of the year, Jennette McCurdy’s funny and heartbreaking memoir chronicles her years as a child performer (iCarly) and her extremely complicated relationship with her mom," the book recommendation site says. "The book has been a massive success, with more than half a million shelvings on Goodreads and a runaway voting victory in this year’s memoir category."

"Based on the popular podcast series, Bad Gays is a mischievous variation on the usual approach to popular history," Goodreads says. "Rather than focus on LGBTQ icons and heroes, the book profiles various villains, rogues, and baddies from the pages of history. Carefully researched and quietly subversive, Bad Gays is a tribute to the unexemplary life."

Best in Poetry: "Call Us What We Carry" by Amanda Gorman

"Author, activist, and the first Youth Poet Laureate of the United States, Amanda Gorman has earned a worldwide following since performing her poem ‘The Hill We Climb’ at the inauguration of President Joe Biden," Goodreads says. "Her new collection gathers more than 70 additional poems and is Gorman’s second win in a row in the category."

"Author Bonnie Garmus’ shrewd and funny debut follows the fate of brilliant Elizabeth Zott, who uses her success as a chemist—and later, an unlikely cooking show star—to change the status quo for women in repressive 1960s America," the book recommendation site says. "An adaptation of Lessons in Chemistry is slated for Apple TV+ next year, with Brie Larson in the lead role."

Best in Best Middle Grade & Children's: "I Am Quiet: A Story for the Introvert in All of Us" by Andie Powers (Author), Betsy Petersen (Illustrator)

"Introverts of the world, unite! Quietly, please. Author Andie Powers and illustrator Betsy Petersen have created a beautiful and compassionate picture book experience with I Am Quiet, the story of young introvert Emile and his rather astounding imagination. Shy people may be quiet, but quiet people are not necessarily shy," Goodreads says.

RELATED: Pop culture moments in 2022: The year of the slap