Bernie Sanders rallies Democrats in Virginia ahead of Tuesday election

Sen. Bernie Sanders was in Manassas, Virginia Monday night ahead of Tuesday’s election.

MANASSAS, Va. (FOX 5 DC) - Sen. Bernie Sanders was in Manassas on Monday ahead of Tuesday’s election.

Virginia is the only state in the country where control of the legislature is up for grabs. Right now, Republicans control the Senate and House of Delegates by razor-thin margins.

Sanders joined local candidates at Jirani Coffeehouse where he spoke about universal healthcare and other issues paramount to his presidential campaign. The coffee shop was packed with an overflow crowd waiting outside.

“Tomorrow’s Election Day, let’s go out, let's knock on every door that we can, let’s elect these guys and everybody else who’s running as a Democrat tomorrow,” said Sanders. 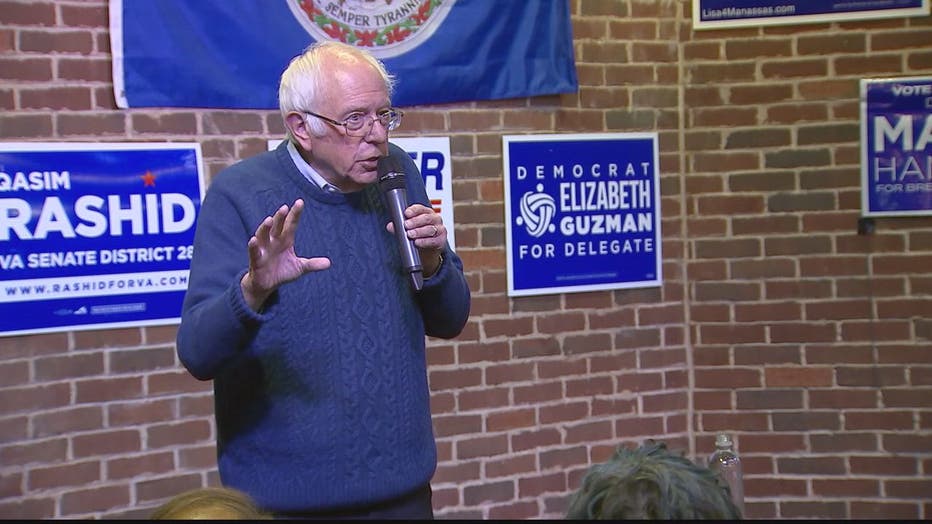 Democrats want to move forward with changes that will have a major impact on the state including new gun control measures, ensuring gay rights and access to abortion and increasing the state minimum wage the currently stands at $7.25 an hour.

Meanwhile, Republicans are working to hang on to the General Assembly with some campaigning on the accusations of sexual assault against Lt. Gov. Justin Fairfax that followed Gov. Ralph Northam’s blackface scandal.

President Trump has weighed in on Twitter saying Virginia has “the best unemployment and economic numbers,” and warning that will turn around if Democrats win.