Residents in Charles County continue to debate who is responsible for fixing sinking holes that are opening up around the county, causing both financial and safety concerns. FOX 5's Stephanie Ramirez reports.

CHARLES COUNTY, Md. - Sinkholes opening on properties is a continued problem in Charles County, Maryland that’s resulted in tedious battles over who’s responsible for the fix as financial and safety concerns grow.

All summer and before that, Walt Merchant in the Swan Point community of Issue, Maryland in Charles County, has been reaching out to various entities trying to get immediate assistance with several sinkholes that have formed on his property. One of those several sinkholes formed almost right next to the foundation of Merchant’s Mohawk Court home.

"The Chesapeake Bay Foundation looked at pictures of mine and confirmed pollution is going into the river, this was probably two years ago. So the pollution entering into the river, the property damage that could occur, or the fact that a kid or a person walking back there could slip on the destroyed bulkhead from this pipe and hit their head and drown has prompted no movement or concern from the county whatsoever," said Merchant. 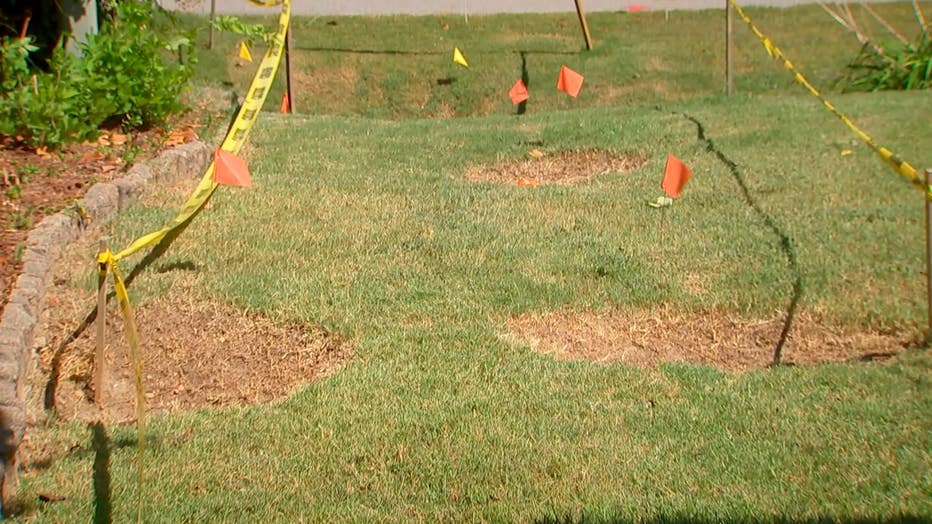 He says the source of the problem is a deteriorating 10-foot drainage easement that Merchant tells FOX 5 is broken and pulling in land when it takes-in water.

Merchant says according to property documents, the easement doesn’t belong to him. The county says: it’s on private property.

FOX 5 did view communication that says the Swan Point Property Owner’s Association, the developer and county have been in talks to come up with some sort of solution to the problem.

It’s not clear what the cost is or how long this could take. Merchant claims those talks have been going on for years. Calls and an email to the association went unanswered on Wednesday.

The Swan Point resident tells FOX 5 he reached-out to the county for assistance but was told via a letter sent in February if there was an immediate danger while negotiations continued, and the county were to make repairs, the "private property owners" would be charged.

Merchant said he and another neighbor were told they would have to pay $50-thousand dollars each.

The letter also notes an inspection done in December 2021 did find pipe failure and illicit discharges into the Potomac River in violation of a county storm drainage ordinance. It warns immediate action is required.

A spokesperson with the Maryland Department of Environment told FOX 5 this is a county matter.

"I can’t find one person to say, ‘That’s just wrong, let’s see if we can help him out," said Merchant.

Over a year-ago FOX 5 reported on a Hughesville homeowner, Theresa Deminne, who said damaging sinkholes formed on her property due to a deteriorated drainage pipe. The pipe involved runs underneath a county road located just outside Deminne’s Maxwell Drive home.

Homeowners and municipal officials are at odds over who is responsible for repairs to a storm drainage system that is causing sinkholes.

"We’re stuck here. Our property is unable to be sold. We couldn’t’ rent it out. We can’t do anything with it. We can’t even get trucks up the driveway to do maintenance," said Deminne.

When FOX 5 spoke with this Charles County homeowner last year, she also shared documentation that showed the developer had deeded the pipe to the county. However, the county’s response at the time was that there was no proof the deed had been accepted, therefore placing the responsibility back on the homeowner, or what Deminne said was a now defunct developer.

"This is a county-wide problem. It’s a problem of, I don’t know if it was bad record-keeping back in the early 80s, early 90s or these development agreements were not taken seriously – and developers were given back their bonds that were meant to ensure that developers completed-out subdivision properly some homeowners weren’t put in these situations," said Deminne, "I do hope they do the right thing. It seems like they have a good plan.

READ MORE: Massive sinkhole continues to cause issues for drivers in Frederick

Here’s the full statement from a Charles County Spokesperson, which mentions the "good plan" Deminne is referred to. It’s called the "Climate Resilience Authority."

"Like many communities around the country, Charles County has experienced more significant flooding from severe storms that overwhelm aging stormwater infrastructure. Aging neighborhoods that were developed prior to current stormwater regulations are especially vulnerable to these risks. We understand and recognize the financial and emotional impact that these issues have on Charles County residents.

The cost to address the magnitude and complexity of all privately-owned, improperly maintained stormwater management systems, where some sinkholes are occurring, is an enormous task – but one that Charles County has been the first in the State of Maryland to begin addressing through a Climate Resilience Authority.

The Board of County Commissioners has set aside $10 million in ARPA funds for the Climate Resilience Authority to initiate an equitable solution for all residents. A contractor is currently assessing properties that have been affected, evaluating the urgency of the repairs needed, and ensuring equity in its approach to prioritizing projects throughout the county.

When public safety issues arise within the neighborhoods on the list that cannot wait for resolution until the end of the prioritization process, the County is committed to addressing those concerns immediately.  Public safety issues are those that involve an immediate risk to life and limb due to proximity to public transportation routes."

The Charles County Spokesperson confirmed on Wednesday, Deminne’s property is on that list.