Bald eagle released into wild after being hit by car

A bald eagle was released back into the wild of Montana after the bird of prey was hit by a car in March, officials said. Credit - Montana Raptor Conservation Center via Storyful

BOZEMAN, Mont. - A bald eagle has been released back into the wild after it was hit by a car in Montana, officials said.

The eagle was hit by a vehicle in Gallatin County, which encompasses the city of Bozeman, back in March, according to the Montana Raptor Conservation Center. The nonprofit provides rehabilitation to injured birds in the state, as well as community education and conservation and research.

The eagle was rescued by citizens and "was lucky to only suffer minor injuries," the center said in a Facebook post.

It shared a video of animal officials finally releasing the bald eagle back into the wild some three weeks after its injury. 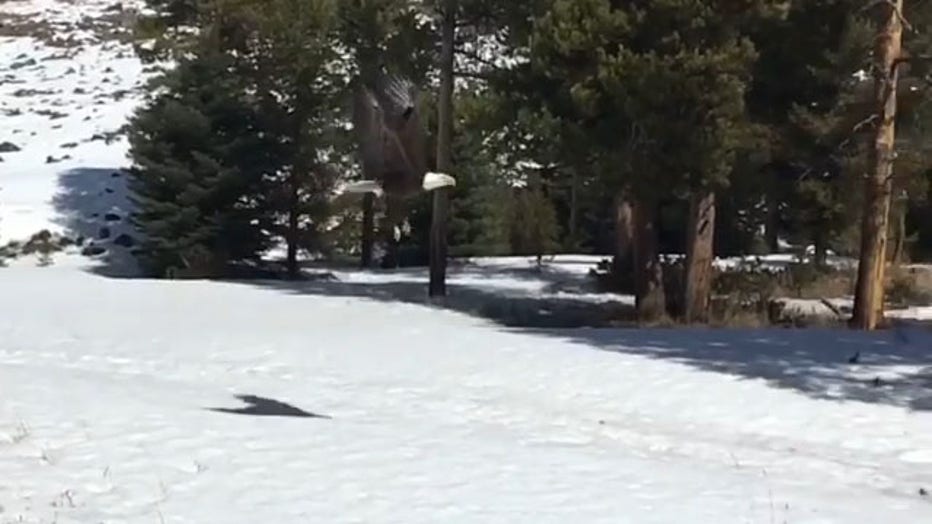 The bald eagle is pictured flying back into the wild in video captured April 2, 2021 in Bozeman, Montana. (Credit: Montana Raptor Conservation Center via Storyful)

Montana has a strong population of these bald eagles, often spotted along waterways and lakes, according to the state’s tourism website.

Across the U.S., the bird of prey has also flourished in recent years after once teetering on the brink of extinction.

The U.S. Fish and Wildlife Service said recently that the number of American bald eagles has quadrupled since 2009, with more than 300,000 birds soaring over the lower 48 states.

Bald eagles reached an all-time low of 417 known nesting pairs in 1963 in the lower 48 states. But after decades of protection, including banning the pesticide DDT and placement of the eagle on the endangered species list in more than 40 states, the bald eagle population has continued to grow. The bald eagle was removed from the list of threatened or endangered species in 2007.

U.S. officials said last month there were more than 71,400 nesting pairs and an estimated 316,700 individual birds.

Interior Secretary Deb Haaland, in her first public appearance since being sworn in, hailed the eagle's recovery and noted that the majestic, white-headed bird has always been considered sacred to Native American tribes and the U.S. generally as its national symbol.

"The strong return of this treasured bird reminds us of our nation’s shared resilience and the importance of being responsible stewards of our lands and waters that bind us together,'' said Haaland, the first Native American Cabinet secretary.

"It is clear that the bald eagle population continues to thrive,'' Haaland added, calling the bird's recovery a "success story (that) is a testament to the enduring importance of the work of the Interior Department scientists and conservationists."