CHICAGO - Soaked with beer and still wearing his No. 8 jersey, Alex Ovechkin held three pucks in his right hand as he posed for a picture with the rest of the jubilant Washington Capitals in the visiting locker room at the United Center.

Ovechkin became the third NHL player to reach 800 career goals when he scored three times Tuesday night, touching off a wild celebration for his team and an appreciative Chicago crowd.

"Soon as it happened, kind of relief," Ovechkin said after Washington’s 7-3 win over the Blackhawks. "Kind of happiness in general." 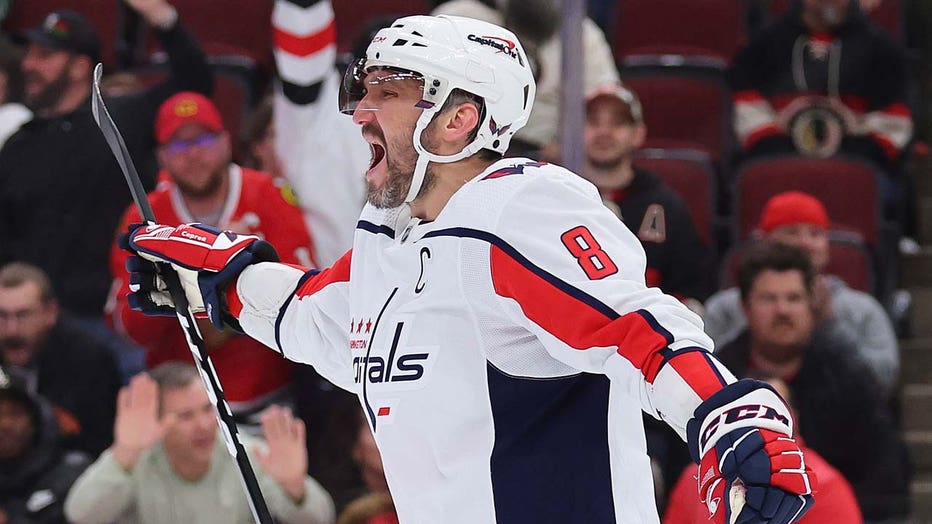 Alex Ovechkin #8 of the Washington Capitals celebrates after scoring his 800th career goal during the third period against the Chicago Blackhawks at United Center on December 13, 2022 in Chicago, Illinois. (Photo by Michael Reaves/Getty Images)

Ovechkin scored on his first two shots, beating Blackhawks goaltender Petr Mrazek 24 seconds into the game before stuffing one home on a power play with 11:46 left in the first period. The 37-year-old winger then completed his 29th career hat trick when he knocked Anthony Mantha’s pass over a sprawled Mrazek 6:34 into the third.

"When he got the first goal today, I was like, ‘This is the night,’" teammate Evgeny Kuznetsov said.

The rest of the Capitals jumped off the bench to celebrate after the milestone goal, and hats rained down on the ice from the crowd of 16,181. Fans in Chicago then chanted "Ovi! Ovi!" — drawing a wave from Ovechkin.

The star forward moved within one goal of Gordie Howe for second all-time. Wayne Gretzky holds the record with 894 goals.

"It's a big number," Ovechkin said. "It's the best company (you can) ever imagine since you started playing hockey."

Ovechkin also praised the crowd for its response.

"Even in the warmup, I was feeling that energy right away," he said. "The fans watch me and the fans want to see that historical moment."

When it was over, Ovechkin jumped onto the ice one last time to salute the cheering fans. He then gave his stick to a boy wearing a Capitals jersey above the tunnel to the visiting locker room.

Shortly after he got to the back, he was showered with beer by his chanting teammates. Goaded into making a speech, Ovechkin said it was special to accomplish the feat with the team.

"It was awesome," Washington coach Peter Laviolette said. "It was just awesome to be on the bench and be a part of it, a part of history."

Ovechkin has seven goals in his last four games and a team-high 20 on the season. His previous four goals were all empty-netters.

The Capitals play seven of their next nine at home.

"I think once he's going to be No. 1 he can have a sense of relief," Mantha said. "Until then, I think he's on the hunt, and that's what we love about him."

Ovechkin has been one of the NHL's most dangerous scorers practically since he got two goals in his debut with Washington on Oct. 5, 2005, against Columbus.

"It’s mind blowing," Chicago captain Jonathan Toews said. "How many guys can score goals at his rate in the season, let alone year after year after year? He’s one of a kind, for sure."