BIRMINGHAM, Ala. - The deaths of four people, including a child, were blamed on intense flooding in Alabama, while high water submerged cars, forced many water rescues and even unleashed sewage in one part of the state.

Dozens of people had to be rescued Wednesday night in central Alabama, where the National Weather Service said as much as 13 inches of rain fell, and a south Alabama town temporarily lost its main grocery store that became flooded. Near the coast, heavy rains caused sewage to bubble out of underground pipes.

Flash flood warnings and watches were in effect on Thursday for a wide swath of the southeastern U.S., including parts of metro Birmingham — which was expected to receive particularly intense rain.

Officials said all four of the deaths occurred when water swept away vehicles, and the victims include a 4-year-old girl who died in northeast Alabama. The Marshall County coroner’s office early Thursday confirmed the child’s death as a result of the flash flooding in the city of Arab.

The rain caused havoc in places across north Alabama, submerging cars in metro Birmingham and parts of the Tennessee Valley. Some of the worst flooding happened in Pelham, outside Birmingham, where 82 people were rescued from homes and more than 15 were pulled from vehicles.

Fire officials issued a voluntary evacuation of an apartment complex in the Birmingham suburb of Homewood due to flooding. One resident, wearing garbage bags around her legs, told FOX 6 WBRC that the water was waist-deep.

In the nearby city of Hoover, emergency crews worked to help a woman stranded in deep floodwaters and standing on top of a submerged vehicle. 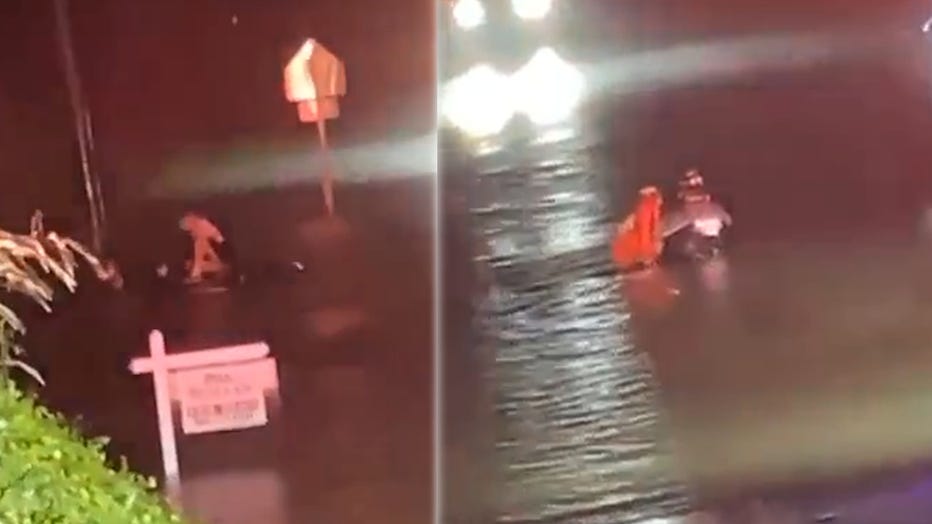 Screengrabs from a video recorded on Oct. 6, 2021, show emergency crews attempting to rescue a woman trapped in floodwaters in Hoover, Alabama. (Credit: John Lyda via Storyful)

In south Alabama, water covered the streets in the flood-prone Escambia County towns of Brewton and East Brewton, inundating businesses in a shopping center with several feet of water.

As much as 3 feet of water was reported inside the community's main grocery store, Piggly Wiggly, and two schools had to cancel classes, said Escambia Sheriff Heath Jackson.

"We’re hoping that the rain is going to stop so we can get some of this water ... out of here and we can start getting into these businesses that have taken on water to see what we can do to help them," Jackson told WKRG-TV.

Farther south in Baldwin County, as much as 250,000 gallons of wastewater overflowed from sewage systems along Mobile Bay, officials said.

Meteorologists predicted another wet day for most of Alabama and parts of Florida, Georgia and Tennessee. As much as 5 more inches of rain was possible through Thursday evening, the weather service said.

Severe storms and a few isolated tornadoes from a slow-moving low-pressure system were a threat, mainly in the afternoon, forecasters said. The National Weather Service issued a tornado watch for northeastern Alabama, northwestern Georgia and southern Tennessee.

Rains should end in Alabama by late Thursday as storms move eastward. Flash flood warnings were in effect through Friday along the weather front, stretching from the Florida Panhandle through northern Georgia and mountainous regions of eastern Tennessee and the western Carolinas.