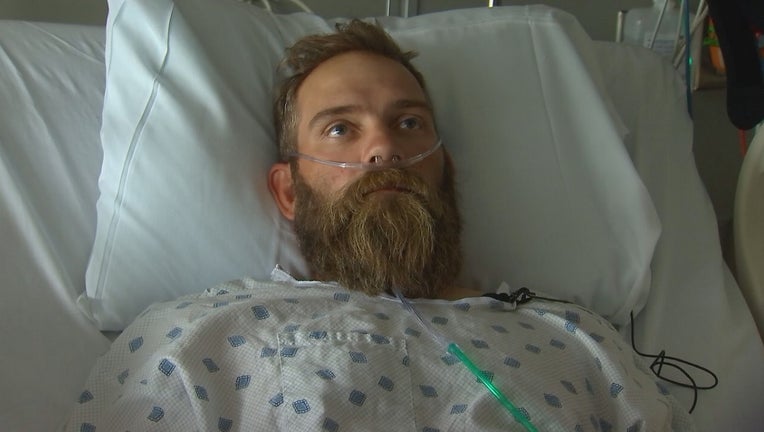 After COVID-19 put him in the hospital, Nick Knack says his biggest regret is not getting vaccinated.

(FOX 9) - A 42-year-old father of four in good shape and with no underlying health conditions says not getting the COVID-19 vaccine was the biggest regret of his life.

After four days in the Intensive Care Unit at St. Cloud Hospital, he wants those who are hesitant, just like he was, to reconsider.

"It is the biggest regret that I will carry with myself for the rest of my life," Nick Knaack said.

Knaack said he chose not to get the vaccine because he’s not considered high-risk, and believed if he contracted the virus he would be fine.

"Knowing what I know now...why wouldn’t I have gotten it?" said Knaack who is still hooked up to oxygen two weeks after symptoms began.

On August 18, he came home from work with a headache. But what started as manageable COVID-19 symptoms quickly turned into a high fever and dangerously low oxygen levels.

"The first three nights, I sweat through basically every piece of clothing I had on plus the sheets," he recalled. "It's like a flu—I thought that once you sweat through your clothes you’ve hit rock bottom and you’re on the path to getting better... But that was the farthest thing from what I would encounter," he said.

He was admitted to the ICU at St. Cloud Hospital where, according to hospital administrators, more than 95 percent of current COVID-19 patients aren’t vaccinated.

"Nick is a powerful story," said DR. Jack Lyons with Centra Care ICU. "He’s young, he’s healthy, he doesn’t have prior conditions and he still ended up in the ICU."

Dr. Jack Lyons says not all of his patients express as much regret as Knaack. Several, he says, remain steadfast in their vaccination choice even as they’re in critical care.

The 42-year-old says the hardest part is knowing that he gave the virus to his six-year-old daughter. His wife and their two oldest children, who are all vaccinated, never contracted it. A testament, he says, to how effective the vaccine truly is.

"To have the opportunity and to not say anything, it would just be wrong," said Knaack.