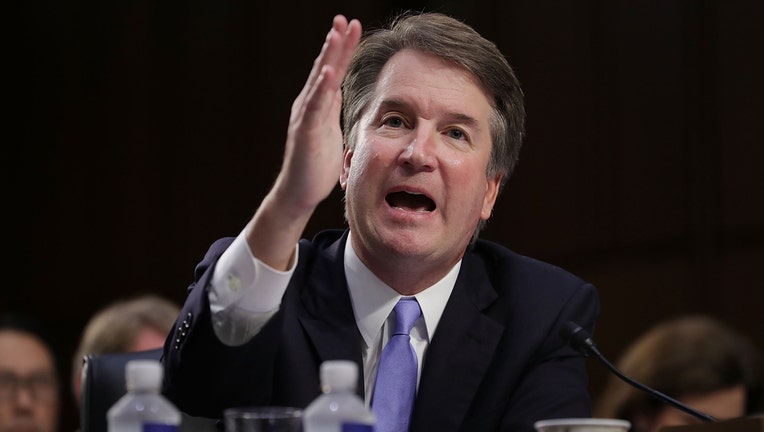 WASHINGTON (AP) -- On the eve of a showdown hearing, Supreme Court nominee Brett Kavanaugh and the senators who will judge him confronted a third set of lurid allegations Wednesday accusing him of sexual misconduct as a young man. Kavanaugh heatedly denied them all, while Democrats complained about a rush to approval and President Donald Trump said the accusations added up to no more than "a con job."

Trump praised Kavanaugh anew at a news conference Wednesday, but in answer to a question he said he could consider changing his mind on the nomination if testimony by Kavanaugh-accuser Christine Blasey Ford is totally convincing. He said of the allegations by her and others, "If I thought he was guilty of something like this ... yeah, sure."

As with the allegations by two previous accusers, the latest incidents are alleged to have occurred decades ago. In a sworn declaration, Julie Swetnick of Washington, D.C., said she witnessed Kavanaugh "consistently engage in excessive drinking and inappropriate contact of a sexual nature with women in the early 1980s." Her attorney, Michael Avenatti, provided the declaration to the Senate Judiciary Committee.

Republican leaders indicated they were still determined to have the committee vote on recommending Kavanaugh on Friday -- after a dramatic Thursday hearing at which both Kavanaugh and Ford, are to testify. A roll call presumably would follow next week by the full Senate, where Republicans hold a scant 51-49 majority.

Timing is critical. Kavanaugh would be likely to cement a conservative tilt to the Supreme Court for years to come, but that could be thrown into doubt if he cannot be confirmed before November elections that might swing Senate control to the Democrats. Republicans, therefore, are anxious to get to the climactic vote, while Democrats insist there should be a time-out to investigate the women's allegations.

There are scattered hints of GOP hesitancy.

Kavanaugh supporter Roy Blunt, a Missouri Republican, was asked as he left a closed-door luncheon attended by Vice President Mike Pence whether GOP senators remained united behind Kavanaugh. His answer: Republicans are impressed by the judge and don't know the accusers and "I think that goes to his advantage."

Susan Collins of Maine, a pivotal moderate who's not announced her position, said she was taking Swetnick's claims seriously.

"This is ridiculous and from the Twilight Zone. I don't know who this is and this never happened," he said.

Judiciary Chairman Chuck Grassley, R-Iowa, tweeted that about 20 committee investigators are "tracking down all allegations/leads & talking to all witnesses & gathering all evidence."

The committee also released a two-page prepared statement from Kavanaugh for Thursday's hearing in which he "categorically and unequivocally" denied Ford's allegation. She has said he forced her into a room at a high school party, held her on a bed and tried removing her clothes as he muffled her mouth with his hands. Ford says she eventually escaped.

Kavanaugh's written testimony for the committee went a bit further than the description of his youthful behavior he gave in a Fox News Channel interview Monday, when he said "people" may have drunk too much at high school parties.

"I drank beer with my friends, usually on weekends. Sometimes I had too many. In retrospect, I said and did things in high school that make me cringe now," Kavanaugh said.

He also provided the committee with detailed calendar pages listing in green-and-white squares the activities that filled his summer of 1982 when he was 17 years old -- exams, movies, sports and plenty of parties.

That's the year when Ford says she believes the assault occurred.

The May through August pages mention several parties at various houses and also a beach week, highlighted in all caps, the week after Kavanaugh's exams. Nothing on the calendar appears to mention Ford, who has said she was a "friendly acquaintance" of Kavanaugh's at the time.

Ford attorneys sent the Judiciary Committee a report on an Aug. 8 lie-detector test she took on her allegations that states her answers were "not indicative of deception."

Swetnick, the third accuser, made other accusations in her statement. The Associated Press has not been able to corroborate them, and continues to investigate.

In an interview with the AP, Avenatti said he would not provide additional details about Swetnick's allegations, saying they want to see an FBI investigation. He said they expect to release additional names and evidence in "coming weeks."

Avenatti also represents Stormy Daniels, who alleges she was paid to keep a sexual relationship with Trump quiet. The publicity-friendly attorney has said he's considering competing for the 2020 Democratic presidential nomination.

Sen. Lindsey Graham, R-S.C., a Trump ally, warned Republicans not to "bail out" on Kavanaugh.

No. 2 Senate GOP leader John Cornyn said the Judiciary panel had asked for interviews and information on new accusations, but he didn't indicate the hearing or planned votes would be delayed.

"The longer this nomination sits out there the more you're going to get reckless allegations that have no basis in fact," he said.

On the other side, Senate Minority Leader Chuck Schumer of New York said Kavanaugh should withdraw his nomination.

Also on Wednesday, Ford's lawyers said they'd given the Judiciary Committee sworn statements from four people who say Ford told them well before Trump nominated Kavanaugh to the court this summer that she had been sexually assaulted when she was much younger. According to all four, she either named Kavanaugh as the assailant or described the attacker as a "federal judge."

Those documents could have weight because people who Ford has said were at the party she's described have not corroborated her account.

In one statement, family friend Keith Koegler said he wrote to Ford in a June 29 email, "I remember you telling me about him, but I don't remember his name. Do you mind telling me so I can read about him?"

Committee Chairman Grassley said Arizona prosecutor Rachel Mitchell will be brought in to handle questioning of Kavanaugh and Ford. Mitchell comes from the Maricopa County Attorney's Office in Phoenix, where she is the chief of the Special Victims Division, which covers sex crimes and family violence.