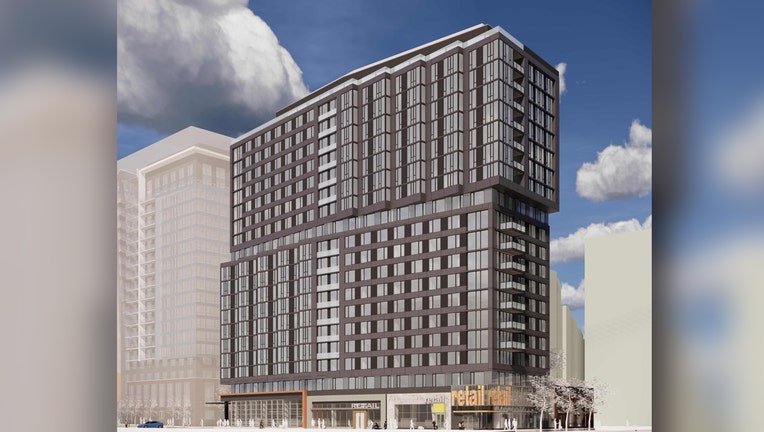 A rendering of the 19-story apartment tower planned for 400 11th St. South in Crystal City.

The planned tower at 400 11th St. South will fill a one-acre site once home to Verizon.

The total number of units in the tower was unknown, but 12 of them will be for affordable housing. The buildin will also include a rooftop terrace for residents, street-level retail and a 148-space underground parking garage.

“The community’s goals for Crystal City, as embodied in the Crystal City Sector Plan, include a better balance of housing and commercial buildings, more affordable housing in this transit-rich neighborhood, and new open space,” County Board Chair Christian Dorsey said in a statement. “This redevelopment is in keeping with all of those goals.”

Developer LCOR agreed to contribute $1.43 million to a new park proposed for South Eads Street and Army Drive, among other public improvements, as part of the zoning agreement.

The new apartments will add more housing to an increasingly expensive town. Amazon chose Crystal City for its 2nd headquarters, and area realtors attribute "the Amazon effect" to rising home prices in the area.