Family of 17-year-old killed at DC hotel speaks out

The 18-year-old shot and killed inside a D.C. hotel room Saturday night was a District high school student, school officials say. FOX 5's Stephanie Ramirez spoke to the family of Akira Wilson after the tragic incident.

WASHINGTON - The 18-year-old shot and killed inside a D.C. hotel room Saturday night was a District high school student, school officials have confirmed.

On Monday, D.C. police released an image of a person of interest who may be involved with the death. D.C. police said they responded to a shooting a little before 10 p.m. Saturday night at the Hilton Garden Inn on 1st Street NE. When officers arrived, they found Akira Wilson suffering from a gunshot wound. She later succumbed to her injuries and died.

"[She] wouldn’t want to get in any problems," he said. "She was what we would call in society, a ‘hustler,’ ‘cause she sold things. She sold candy. She worked with her father on the food truck that he had. She even went with him when he started working at a funeral home. She was always a fun-loving little girl and always made her own way – and made her own money."

Wilson's family told FOX 5 that she was always working hard, and most recently she made college plans with a friend.

Wilson’s mother, Toni Cole, tearfully told FOX 5 her daughter was enrolled in a hospitality program at Jackson-Reed High School while also in a duel program at Trinity Washington University. She also worked part-time.

Cole said her daughter was working toward a career in the funeral industry with her father. 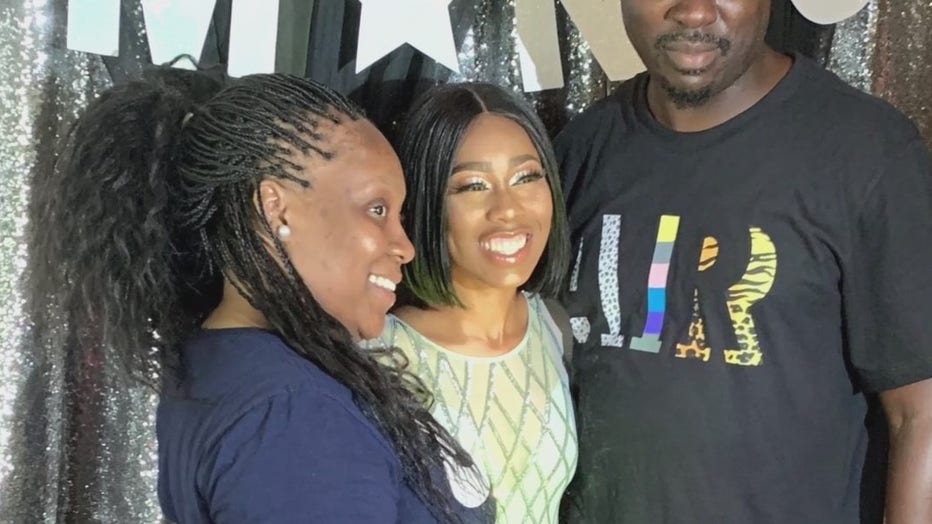 Meanwhile, authorities have not been able to find out why Wilson was shot in the hotel room. The family believes some kind of party was going on at the Northeast D.C. hotel.

Cole told FOX 5 that her daughter was invited by a friend she recently made at school. The family believes the boyfriend of that friend is responsible for the homicide.

D.C. police could not confirm this information.

"Senseless. Unprovoked. Unwanted. That should not have happened. And it should not take this long to come to a conclusion of the actual person who did it," Muhammad said. He's urging the community to "Tell the person [who commit the crime] to surrender and take the punishment that is earned."

In a letter sent to the Jackson-Reed High School community on Sunday, Principal Sah Brown said a mental health team would be at the school Monday to offer support to fellow students.

"It is with great sadness that we share news about a member of our school community," the letter reads. "Akira Wilson, a 12th grader at Jackson-Reed, died under tragic circumstances on November 19. Let us join in sending love and support to her family and friends as they grieve this devastating loss. As a member of the Jackson-Reed family, we know Akira will be missed by all who know her."

Wilson’s best friend shared a photo of flowers adorning Wilson’s locker at the high school. FOX 5 was told a balloon release is being planned for Tuesday.

Police have not identified a motive or suspect at this time. Anyone with information is asked to call police at 202-727-9099 or text the department at 50411. Police are offering up to a $25,000 reward for information leading to an arrest and/or conviction.