WASHINGTON (FOX 5 DC) - Winter since the turn of the New Year has been pretty quiet in the D.C. region.

The last major winter weather maker in our region was the week before Christmas, and so far past the midpoint of this winter, the District of Columbia officially has not picked up any measurable snow at all.

The second half of the winter is typically the snowier half, however, and this week brings several threats that could all finally put an end to D.C.'s snow drought.

Mike Thomas has the FOX 5 Weather forecast for Monday, January 25 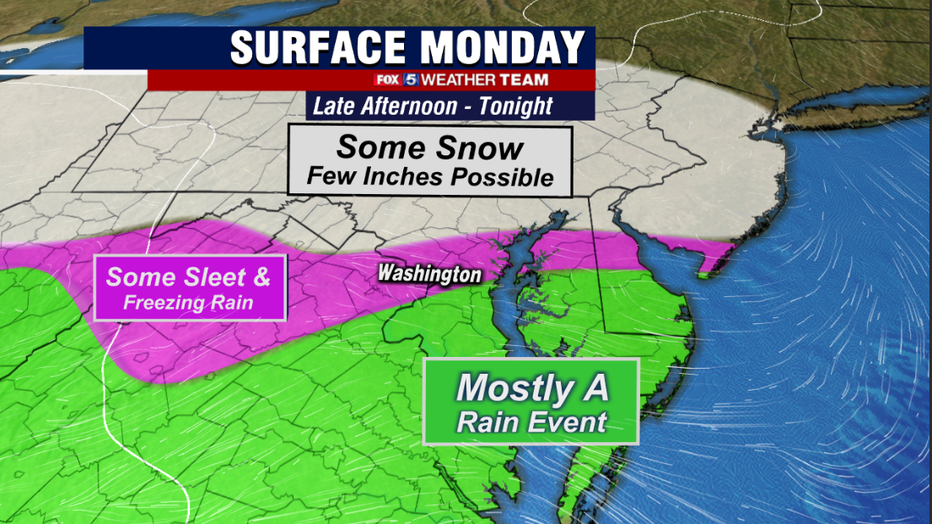 The first comes in later this evening as a weather system pushes in from our south. It was one of the coldest weekends of the winter so far this past weekend, with temperatures both Saturday and Sunday only maxing out in the 30s here in Washington.

The cold does linger this morning across the region, and the air mass is pretty dry as well with dew points as of this morning in the lower 20s. This is important because when you rain into a dry air mass, you cool it. It is this process that could cause even DC, which is expected to remain above freezing for much of the day, to mix with some sleet and potentially even some snow later on this evening.

Tucker Barnes has the FOX 5 Weather forecast for Monday, January 25. 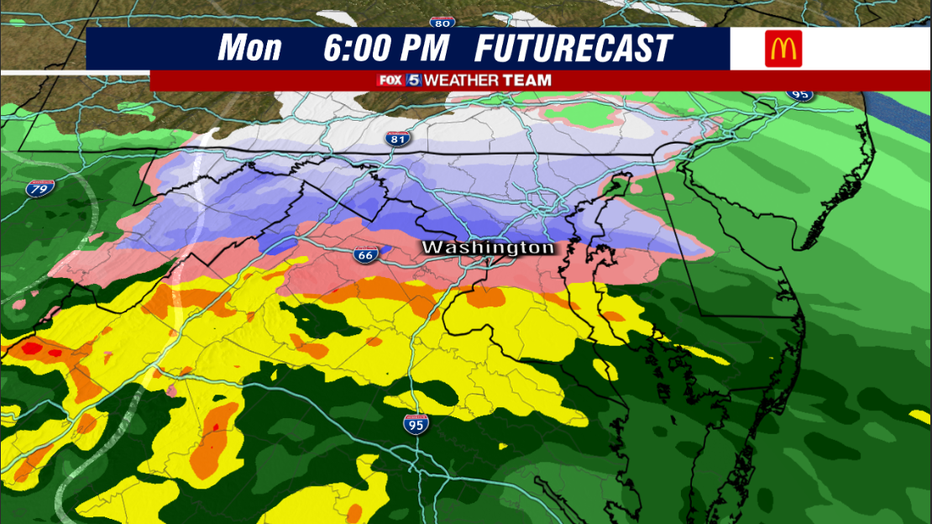 FOX 5’s Bob Barnard has the latest on preparations for winter weather in the area.

Latest model guidance suggests that the rain will approach our region from south to north starting during the middle part of the afternoon, likely between 2 - 4 p.m.

As we get towards the sunset hours, cooling will set in as precipitation ramps up and that is likely to lead with rain mixing with sleet and snow in locations in and around DC with the rain/snow line "battle zone" likely setting up near the I-66 corridor in Virginia.

Northern areas up towards the I-70 corridor are likely to mix with more snow than areas to the south. 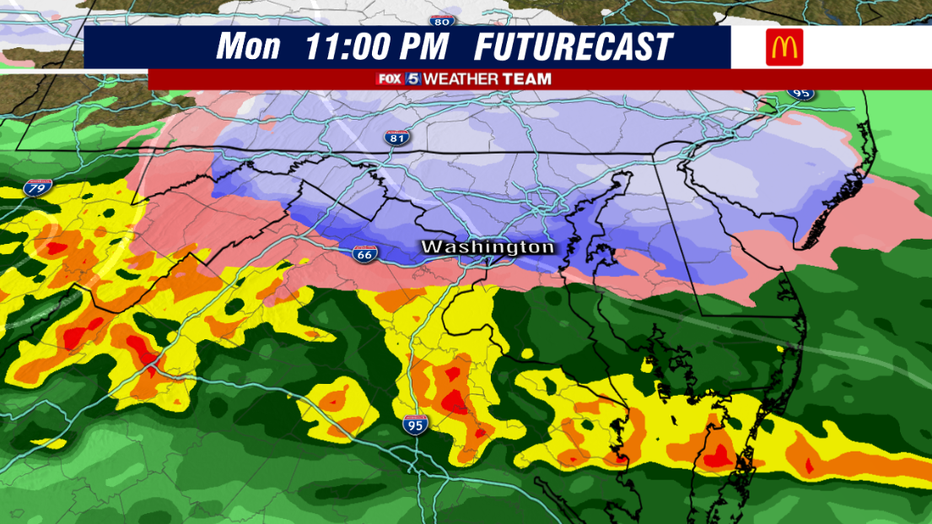 By the late evening and early overnight hours, enough cooling may occur that the rain/snow line sneaks a little farther to the south allowing perhaps DC and some in extreme northern Virginia to pick up a spotty coating of snow. Most though across northern and eastern Virginia, the Northern Neck, and southern Maryland are expected to remain a mostly rain event, however.

The system will start to push out of the region by sunrise on Tuesday, though some lingering showers and some pockets of freezing rain will still be possible through the morning hours tomorrow before some clearing tomorrow afternoon. 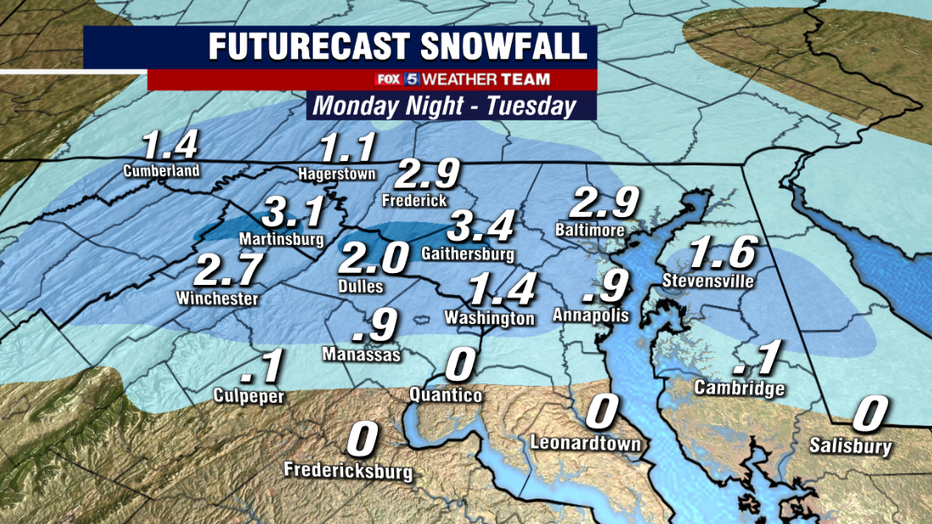 Even in locations that remain mostly snow, we are still not expecting a whole lot.

Some of the more aggressive weather models are only showing as much as 1" or so in DC, though we expect there will be less than that inside the beltway.

Northern areas are going to have the best shot at accumulations with this event but even there we expect that they will be more in the 1-3" range. Not expecting any extremes or jackpot totals with this particular storm system.

It is more the threat for some ice and the timing of it all with the evening commute tonight that will make this event impactful. So please use caution and factor in some extra time if you plan to be on the roads this evening. The areas that are expected to see the highest impacts are under Winter Weather Advisories, which go into effect during the middle part of the afternoon.

They get as close to DC as northern Fauquier, Loudoun, Montgomery, and Howard counties but the District itself and counties to the south and east are not included in the advisory zones as of this morning.

Mountain zones to the west of the I-81 corridor are under Winter Storm Warnings this morning, as this is where some of the more extreme icing is expected from this particular storm. 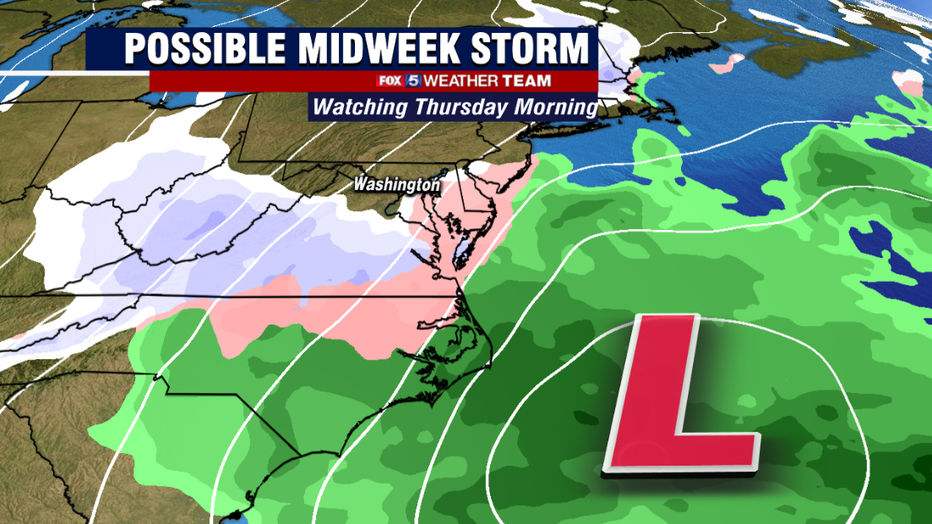 Beyond today, there are two other potential events that we are keeping an eye on in the weather department. The first comes late Wednesday night into Thursday.

Cold air will be reinforced on Wednesday afternoon while a storm system is expected to develop to our south. There are still a lot of questions about exactly how this particular storm system will track.

If it pushes far another north, there will be the threat for significant accumulating snows for parts of our region. However, a number of our weather models are suggesting that this system will miss us to the south. We will continue to watch it and update you in the days ahead. 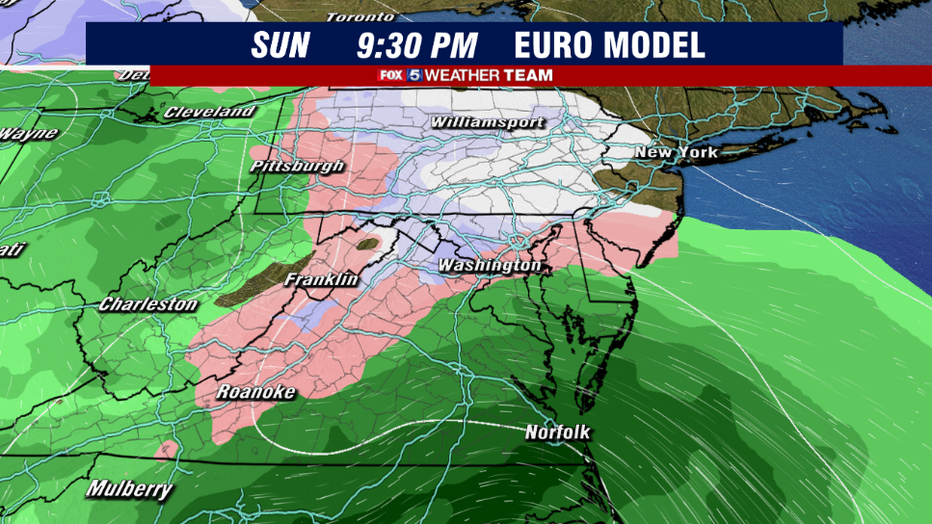 The second event comes in during the second half of the weekend. Very similar to the event on this Monday, it is a case of cold air existing our region as a storm system pushes in from the south.

This could lead to parts, but not all of our region, dealing with some winter weather. It is far enough away in the forecast period though that we are still unsure of the details, and changes will still be likely, so we cannot get into specifics at this stage other than it is a day to watch.

Do not forget about that free Fox 5 Weather App! It can be extremely helpful on a day like today with winter weather threatening the DC region. As always, keep it tuned to FOX 5 on air and online for updates on all of these systems as winter ramps up here in the DC area this week. The FOX 5 Weather Team will keep you in the know every step of the way!