WASHINGTON (FOX 5 DC) - A two-part snow event is taking aim on the D.C. region over the next 48 hours, and this one is a tricky one!

The first wave approaches the D.C. region later on tonight. This morning, winter weather advisories were issued for much of the I-81 corridor, central and northern Maryland, DC, and northern Virginia.

These are the zones that have the best shot at seeing several inches of snow during the first round of winter weather tonight. 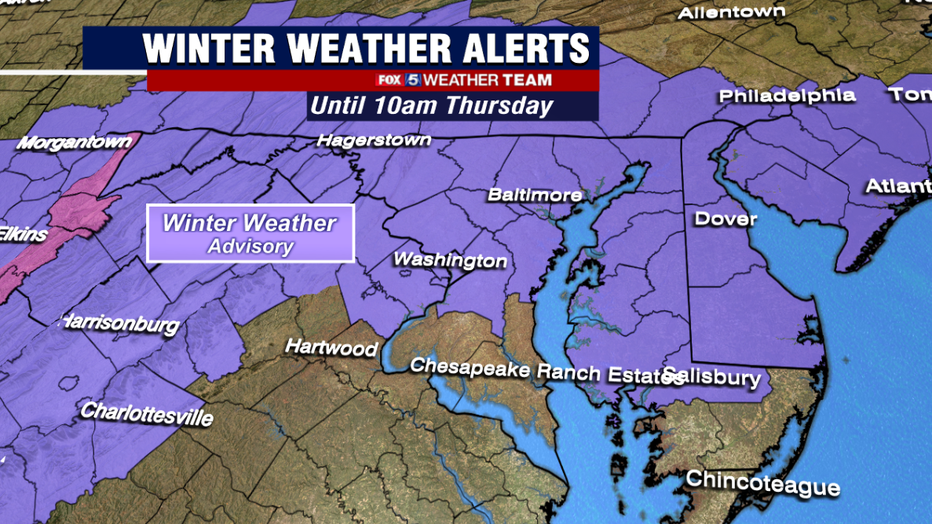 The latest models agree that snowfall will spread from west to east after sunset tonight. Here in D.C., it is most likely to start between the hours of 7 p.m. to 10 p.m. tonight.

With temperatures near freezing tonight, roadways could get awfully slick pretty quickly as snow picks up heading into the overnight hours. 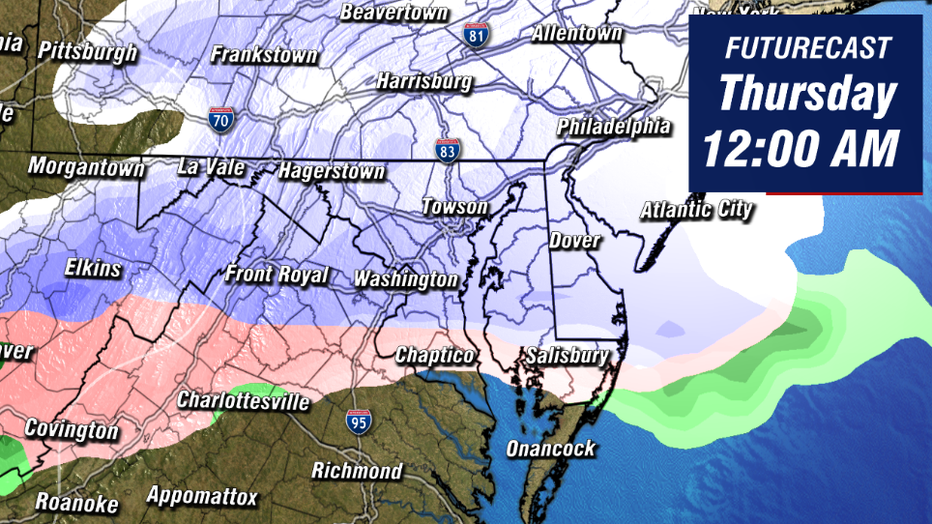 This first wave is expected to have a very northern focus. We're mostly focused on area north of the I-66 corridor for this first round tonight. A general 2-4" is expected by the time the system exits our region around or a little after sunrise on Thursday.

Southern zones are not expected to see a whole lot of snow from the initial wave tonight, due to both limited moisture and the threat for some sleet and rain mixing in with the snow. 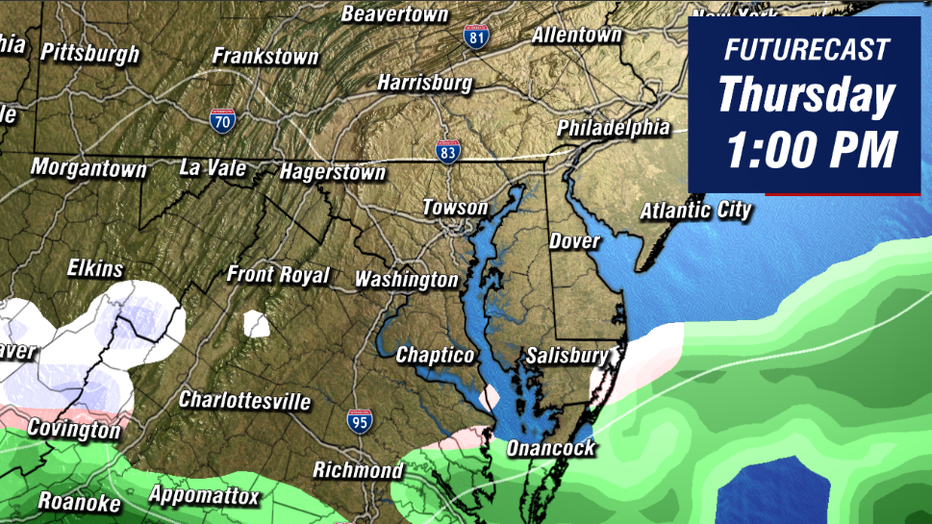 Most of the daylight hours on Thursday look very quiet. We will be in between the two systems, and conditions may dry enough that the sun may even shine through the clouds in some locations.

While the morning commute will likely be tricky due to the overnight snow, the evening commute should be less so with nothing additional falling through the afternoon. 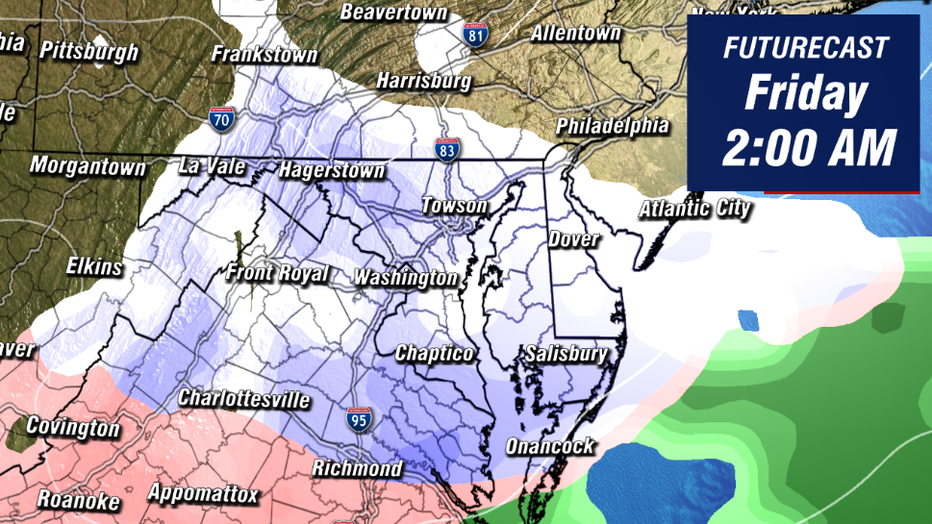 The second wave then approaches the DC region later on Thursday night. Most likely timing is once again around the sunset hours on Thursday.

Unlike the first wave, this second wave is expected to have more of a southern focus in terms of where the steadiest and heaviest precipitation will setup. 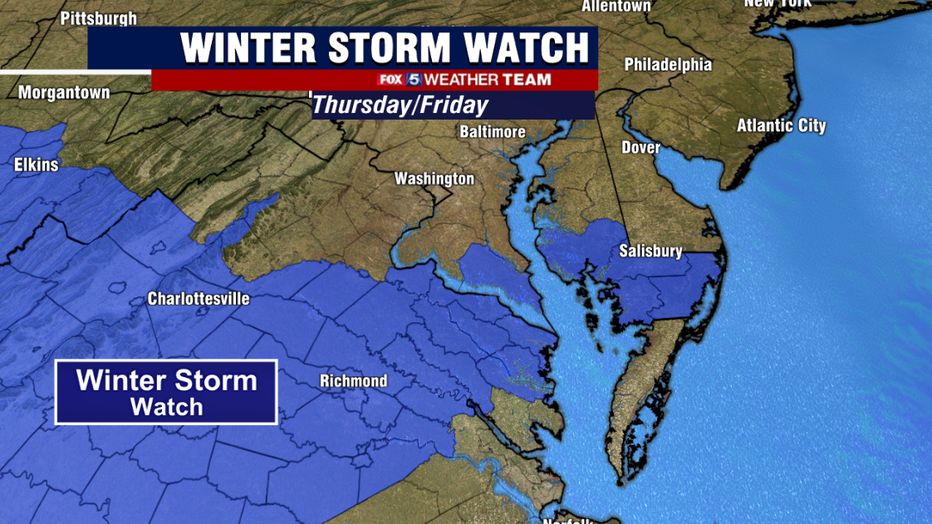 As such, the National Weather Service has issued Winter Storm Watches in the areas most likely to see the most significant snowfall on Thursday night into Friday.

At this time, they have all been issued well to the south of DC, but do include parts of the Northern Neck and Southern Maryland. 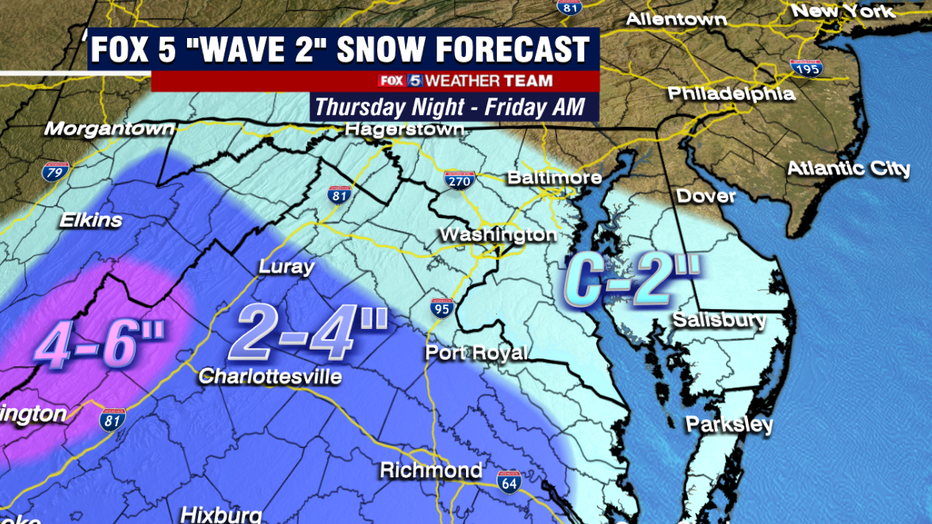 Steadier snows on Thursday night are expected to stay to the south of DC. Central Virginia appears favored to pick up the most snow with this second wave.

How far to the north the snow ield will reach remains in question, but at this time the guidance is generally leaning towards the steadiest snows staying south of DC on Thursday night. Several models have no additional accumulation in DC or northern area at all.

So still need to work out some of the details with the second wave. The second wave should exit our region before dawn on Friday morning. 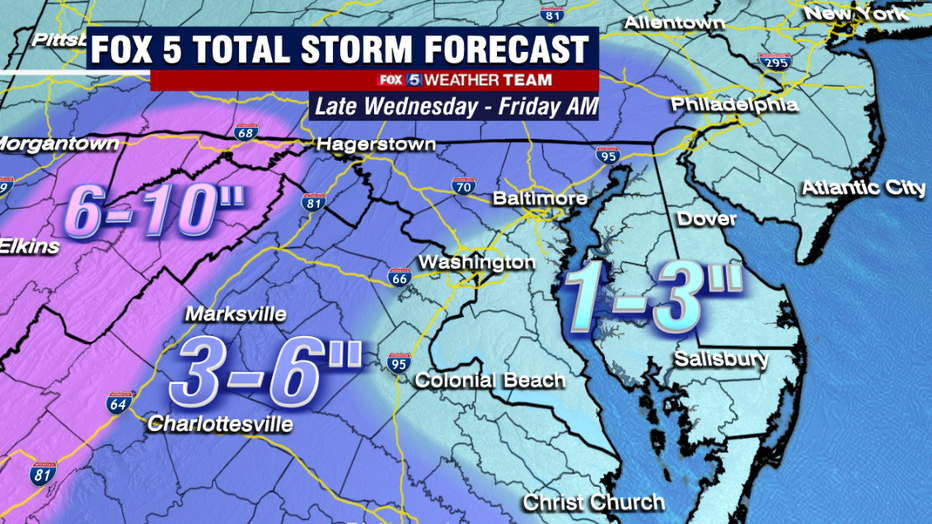 All in all, when we look at both events together, we expect about 1-3" of snow around the I-95 and areas to the east with this event by the time both systems exit our region. 3-6" to the west of the DC area, and along the Mason-Dixon line to the north.

The key to remember is that snow tonight will likely have a more northern focus, while the snow tomorrow night will have a more southern focus. DC is likely to be caught somewhere in between, but not be the focal point of either individual wave. 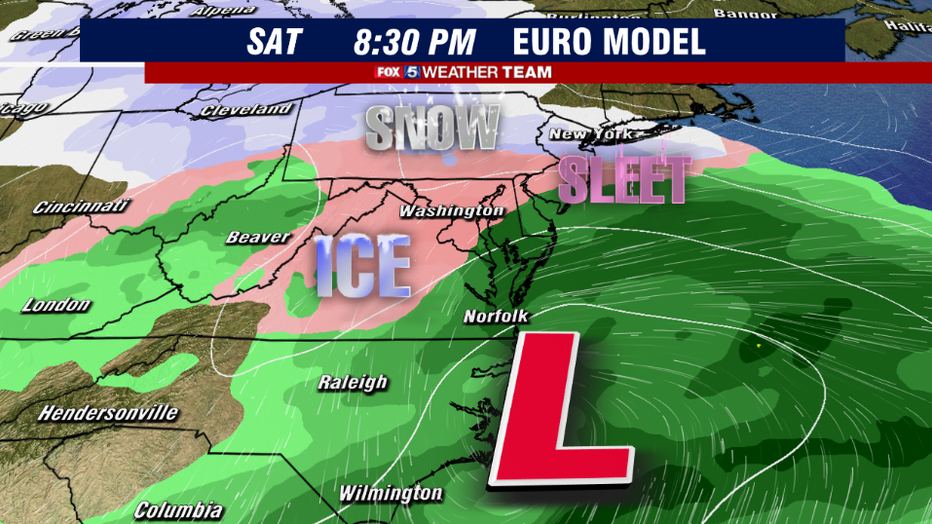 I know it is a lot, but we also want to warn you about the potential for more winter weather on Saturday. A weak coastal low is forecast to scatter more precipitation across the DC region on Saturday afternoon and evening.

Temperatures do look cold enough at the surface to support winter weather, however with some middle atmospheric warmth in the forecast, this event is likely to be more of a mix/sleet event.

Freezing rain could produce a decent amount of ice as well. Travel could get slick in spots. Not expecting much in the way of snowfall though. 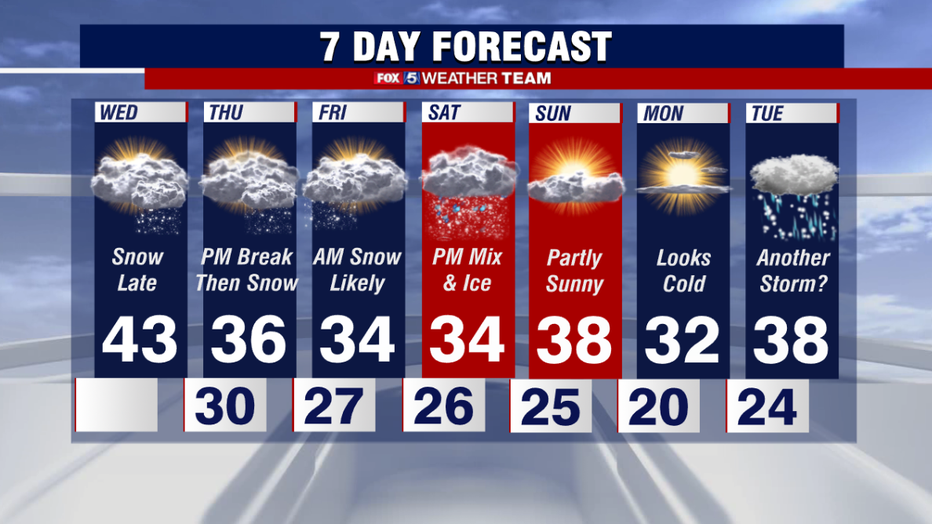 The 7-day outlook though is one of the busiest that we have had during the winter in a few years. While we are not expecting any sort of major winter storm or blizzard over the next few weeks, we do have several chances for winter weather in the next week.

In addition to the weekend which we mention above, there is also the threat for additional winter weather around next Tuesday. So be sure to keep it tuned to Fox 5 for the very latest as this busy February rolls on!