One of the most powerful tornadoes to ever strike our region hit Southern Maryland 20 years ago today.

Twenty years ago today, one of the most powerful tornadoes to ever strike our region hit Southern Maryland. Baseball-sized hail, buildings ripped from their foundation, winds in excess of two hundred miles per hour as chasers track a tornado through multiple counties.

This is a story you might expect to hear from tornado alley, but instead, it became the reality for folks in Southern Maryland. 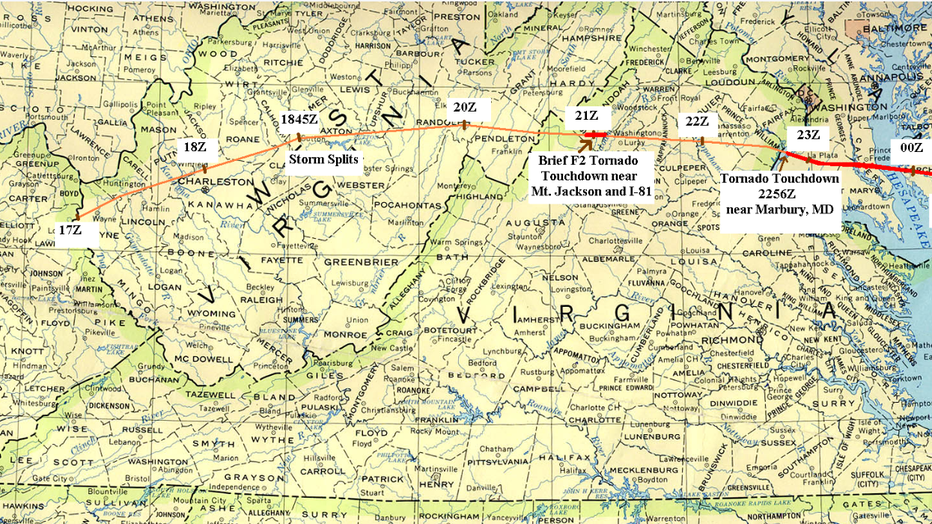 The story of the tornado actually begins about five hours prior to hitting the town of La Plata, as a storm developed along a cold front near the Kentucky, West Virginia border. This storm grew large enough to the point that it eventually split into two storms just before three in the afternoon with the southern cell tracking due westward towards the Washington, D.C. area. As it approached the Blue Ridge mountains, the storm briefly gained enough strength that it produced a brief F2 tornado in Shenandoah County before weakening as it crossed the mountains.

The storm quickly gained strength again as it moved eastward towards the Potomac River, and almost immediately after crossing, a new tornado developed over eastern portions of Charles County, Maryland just before 7 p.m. 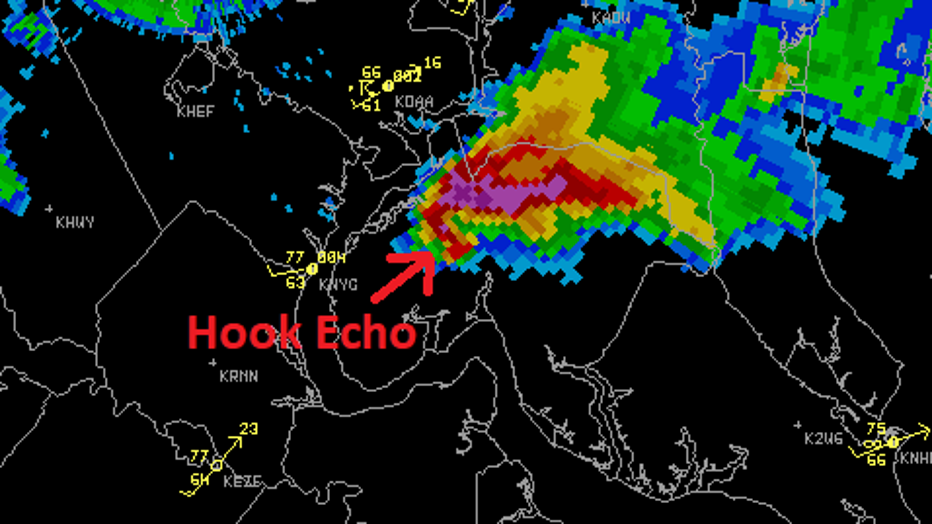 Tornadoes turned the fall of 2001 and the spring of 2002 into violent seasons for our region.  I remember it vividly as it was the time period that inspired me to follow meteorology as a career.

In September 2001, just a couple of weeks after the 9/11 terrorist attacks, one of the worst tornado outbreaks on record for the D.C. region brought a series of six tornadoes to the Baltimore-Washington metro region. This included an F3 tornado that struck the University of Maryland.

I was an 11-year-old Prince George's County elementary school student at the time, and we were thankfully dismissed early, as that tornado partially ripped the roof off of my school.

Just seven months later, I remember sitting in my basement watching many of the local meteorologists, including Sue Palka, break into programming to cover the tornado.

As the storm started its track across Southern Maryland around 7 p.m. in the evening, it very quickly developed a classic "hook echo" signature on the radar indicating a mature and very powerful storm with a likely tornado. Strong updrafts powered an intense hail core, with hail the size of baseballs falling near the storm's center.

The storm moved quickly, with forward speeds of nearly 60 mph as it approached the town of La Plata, with the tornado strengthening as it arrived. 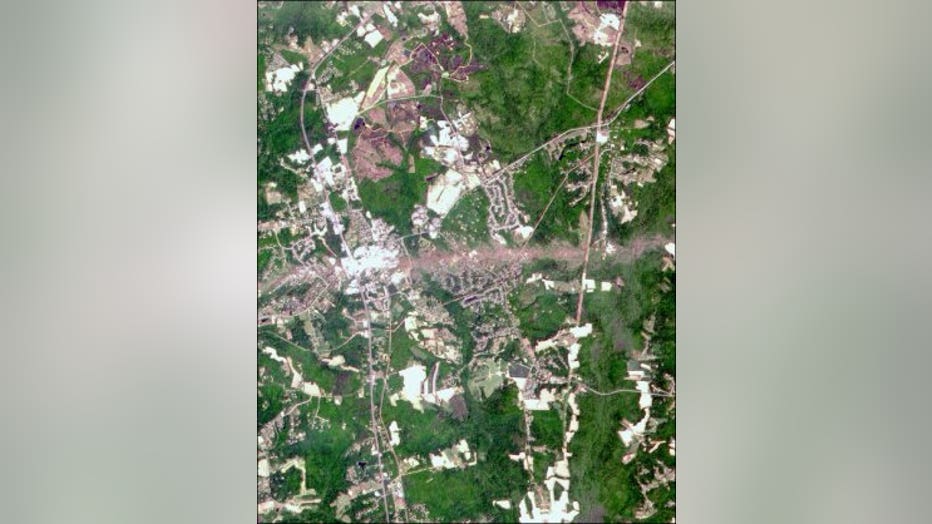 As the storm approached La Plata, witnesses reported a possible second, smaller tornado on the ground from the same storm. At approximately 7:02 p.m., both tornadoes struck the southern half of the city of La Plata.

Over the next five minutes, the twin tornadoes devastated the southern half of the town. Cars were tossed over, homes were destroyed, and one person was killed as the storm moved through.

National Weather Service reanalysis suggested that the main tornado had a diameter of half a mile as it tore through the town, with winds peaking near 260 mph. The secondary tornado quickly dissipated, while the primary tornado continued to move eastward into Calvert County.

While it did weaken, it occasionally showed bursts of strength of F2/F3 levels as it crossed into Calvert County, where it destroyed another home and sadly took two more lives. 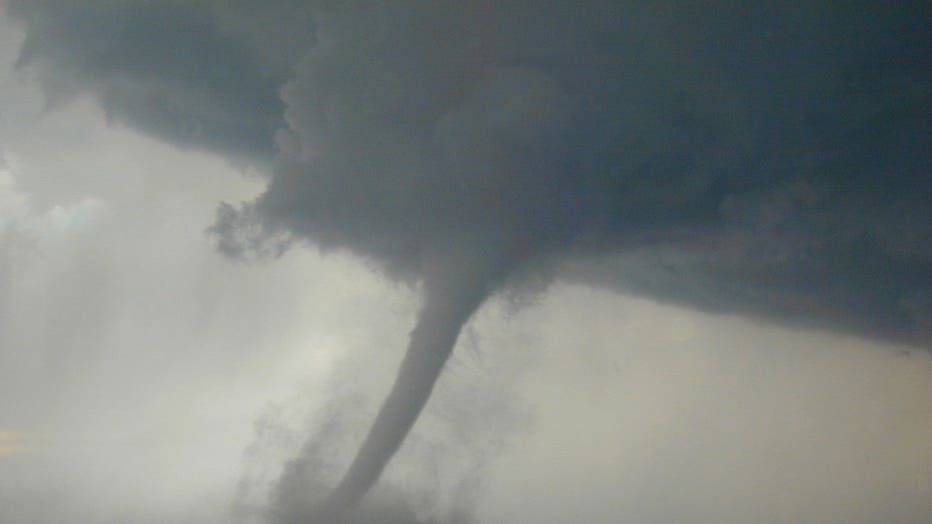 As the 8 p.m. hour approached, the tornado exited eastern Calvert County and pushed out over the waters of the Chesapeake Bay, where it was heavily photographed as it took on a more classic "cone" shape.

The tornado remained on the ground on the other side of the bay as it entered Dorchester County, before dissipating as it approached the town of Salisbury, Maryland. The tornado was on the ground for about an hour and a half, one of the longest track tornadoes our region has ever seen.

It was so strong that phone bills and banknotes from La Plata were reportedly found in Delaware – over 60 miles away. 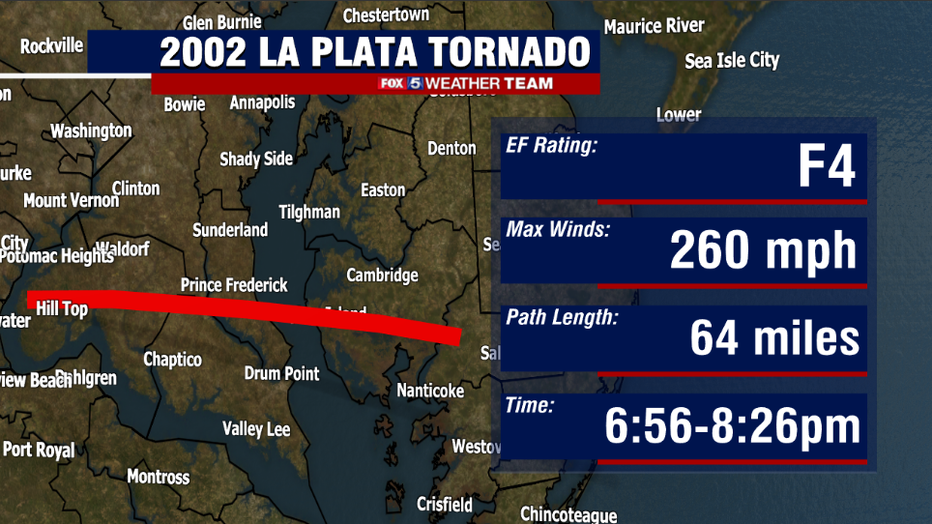 The La Plata tornado of 2002 was one for the record books. Initially rated Maryland's first F5 tornado in history, it was downgraded to an F4 when engineers found that many of the buildings where F5 damage was reported were not properly anchored to their foundations.

Thus the wind estimate of 260 mph peak winds sits right at the top of what was at the time the Fujita scale where F5 started at 261mph+. It remains the second strongest tornado on record to strike a state along the East Coast, with a tornado in 1953 Worcester, Massachusetts holding the record for the strongest.

The La Plata storm did over $100 million dollars worth of damage.

The tornado is one of only three F4 tornadoes ever reported in the State of Maryland. Sadly, one of the other ones also occurred in La Plata.

In November of 1926, another F4 tornado struck an elementary school in the town, killing 13 students. The other was an F4 near Frostburg, which struck in June of 1998.

The 2002 tornado remains the last major tornado in our region.