WASHINGTON - Veterans Day Monday is going to get this week off to a good start. Some sunshine mixing with clouds, but a steady southwest wind will bring temperatures into the 60s later on this afternoon. Unfortunately, that’s about as good as it gets for the next week.

Overnight tonight, a strong cold front will approach the D.C. region. As it approaches the Interstate 95 corridor in the pre-dawn hours, rain showers are expected to overspread the D.C. region as temperatures fall back from the 50s and into the 40s. It is not the most moisture rich system in the world, but there is the potential for rain to come down briefly heavily the cold front passes over our region, and this is where things get tricky when it comes to the potential for some snow.

Cold air will be spilling into our region through all levels of the atmosphere throughout the morning hours. Due to our areas unique topography with the mountains off to the west acting like a natural “dam” of sorts, the cold air at the surface is likely to be delayed on its arrival, as it often is when it arrives from the northwest. However, the cold will be spilling in above our heads rather vigorously above our heads. If the precipitation can remain heavy enough into the midmorning hours, there is the potential for a change over to a mixture along the I-95 and even some snow in our northwest suburbs as some of that cold gets pulled down to the surface.

Snow in November always seems to take folks by surprise, but flakes are not as rare as many think. Washington, D.C. actually averages a half inch of snow in the month of November. It is the big storms that are rare during the month, like November of 1987 when over a foot of snow fell across the D.C. region on Veterans Day. This will not be that scenario. At worst, if a weak wave rising the frontal boundary as it passes is able to strengthen enough to keep up precipitation rates, some of our suburbs could get a dusting to an inch on the grass, with surprisingly this being most likely southeast of town in parts of Southern Maryland where the precipitation is expected to linger the longest, into the early afternoon. 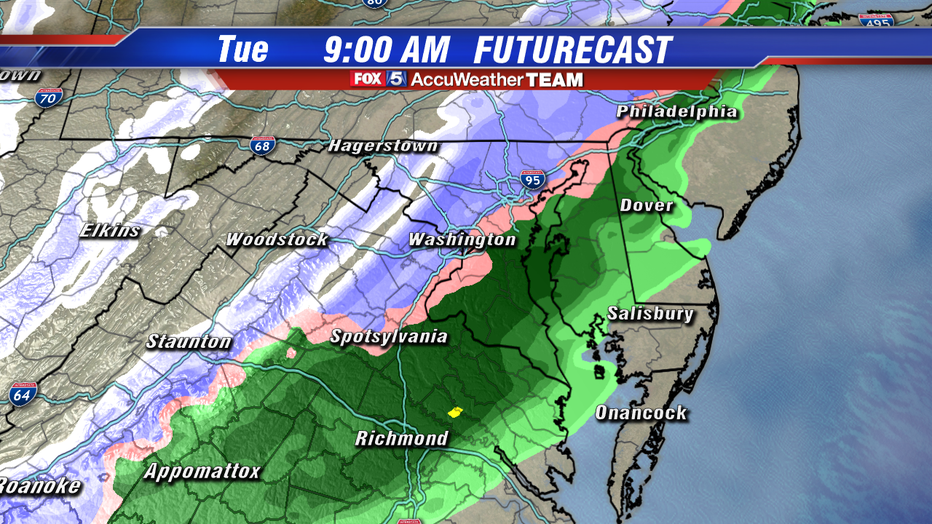 A much more likely scenario however is that moisture “outruns” the cold and we see very little in the way of snowflakes here in the immediate D.C. metro area. Very few weather models this morning showed any accumulation at all for the city. Both our morning forecast and the forecast from the National Weather Service is not expecting any accumulation as well, thanks to mild surface temperatures.

That does not mean winter is not coming in a very big way though. Skies will clear by the middle afternoon on Tuesday, but winds will be gusty (30mph+) out of the northwest as a cold, Canadian air mass spills into the Mid-Atlantic. Temperatures will fall all day tomorrow. It will be warmer at sunrise than it will be during the middle of the afternoon. 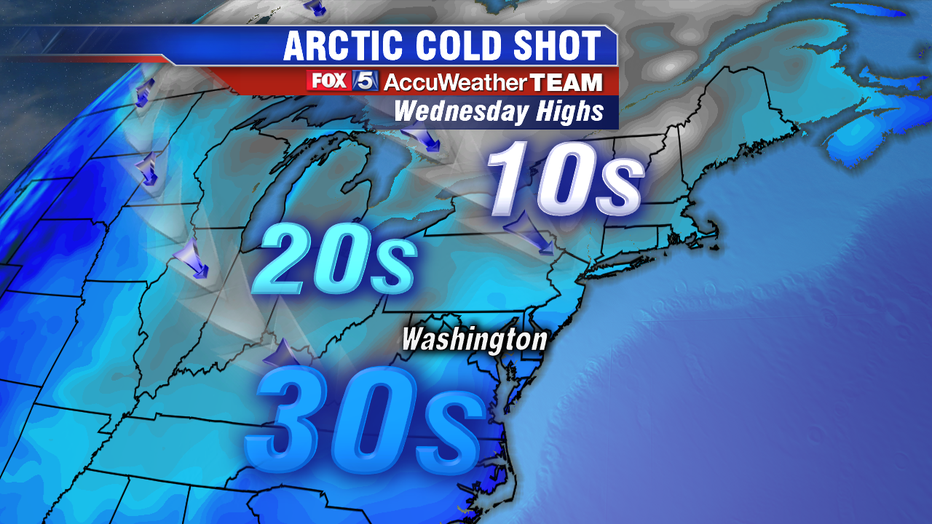 By the evening, as winds begin to lighten, temperatures will plummet into the widespread 20s with even some teens possible for some of our western suburbs. Despite full sunshine on Wednesday, temperatures will feel much more like January instead of November as high temperatures fail to make it out of the 30s. While the remainder of the week will be better by comparison, temperatures are expected to remain chilly and below normal through the duration of the workweek and through the weekend as well.

Should anything change, the FOX 5 Weather Team will let you know! In the meantime, please stay warm out there!

Overnight tonight, a strong cold front will approach the D.C. region. As it approaches the Interstate 95 corridor in the pre-dawn hours, rain showers are expected to overspread the D.C. region as temperatures fall back from the 50s and into the 40s.