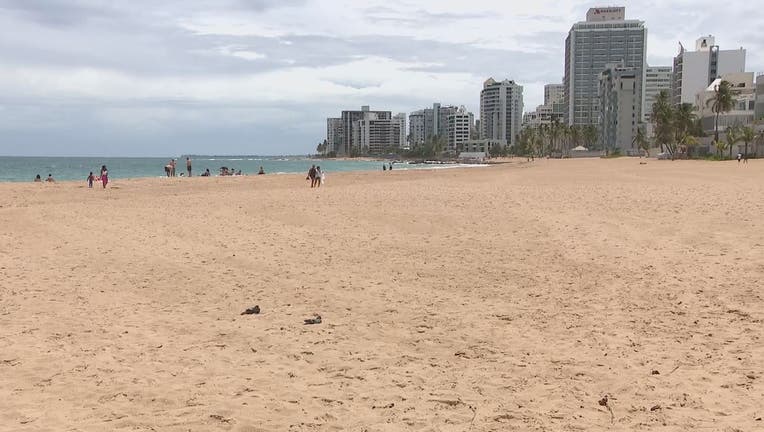 SAN JUAN, Puerto Rico - Dorian became a Category 1 hurricane on Wednesday as it struck the U.S. Virgin Islands, with forecasters saying it could grow to Category 3 status as it nears the U.S. mainland as early as the weekend.

The British Virgin Islands and the Puerto Rican islands of Vieques and Culebra were also in Dorian's path with landslides, widespread flooding and power outages possible in the U.S. territory, which faced its first major test of emergency preparedness since the 2017 devastation of Hurricane Maria. 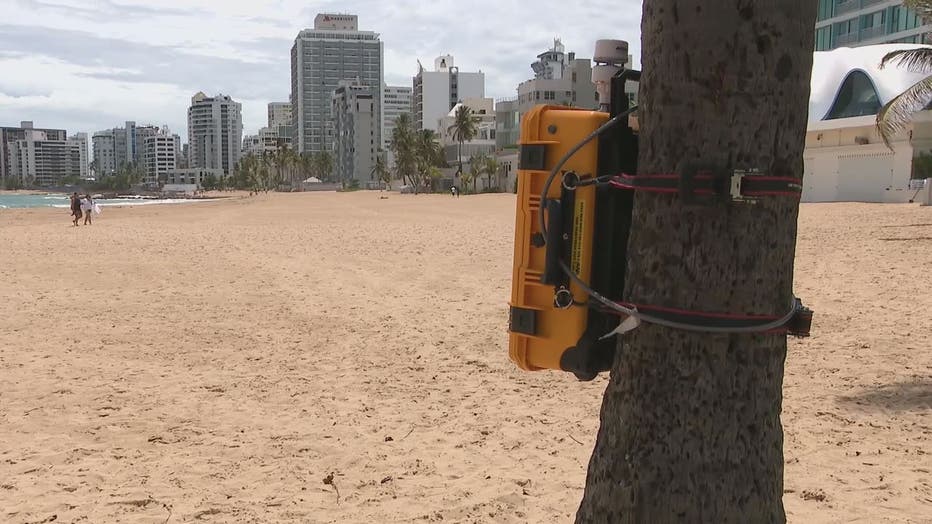 At 2 p.m. EDT, Dorian was located over St. Thomas in the U.S. Virgin Islands. The U.S. National Hurricane Center said it had maximum sustained winds of 75 mph (120 kph) while moving northwest at 13 mph (20 kph).

The Hurricane Center said the storm could grow into a dangerous Category 3 storm as it pushes northwest in the general direction of Florida.

Tropical Storm Dorian threatened Puerto Rico with a direct hit at near-hurricane force on Wednesday and forecasters said it could strengthen further as it approaches the U.S. mainland.

A hurricane tropical storm warning was in effect for Puerto Rico, with Dorian expected to dump 4 to 6 inches (10 to 15 centimeters) of rain with isolated amounts of 8 inches (20 centimeters).

It's a forecast that worries many in Puerto Rico because blue tarps still cover some 30,000 homes nearly two years after Hurricane Maria. The island's 3.2 million inhabitants also depend on an unstable power grid that remains prone to outages since it was destroyed by Maria, a Category 4 storm. 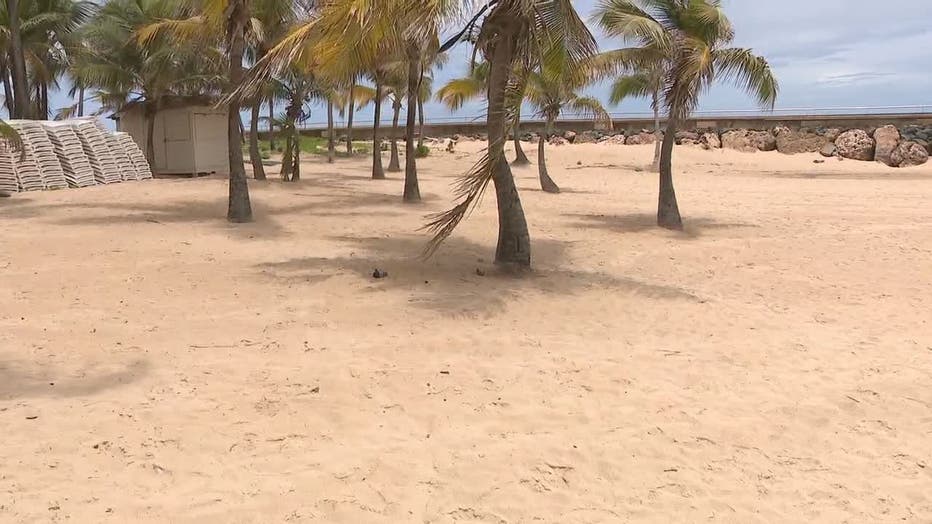 Ramonita Torres, a thin, stooped, 74-year-old woman lives by herself in the impoverished, flood-prone neighborhood of Las Monjas in the capital of San Juan. She was still trying to rebuild the home she nearly lost after Maria but was not able to secure the pieces of zinc that now serve as her roof.

"There's no money for that," she said, shaking her head.

A reported 23,000 customers were without power across Puerto Rico by early Wednesday afternoon, according to Ángel Figueroa, president of a union that represents power workers.

Police said an 80-year-old man in the northern town of Bayamón died on Wednesday after he fell trying to climb up to his roof to clear it of debris ahead of the storm.

In the U.S. Virgin Islands, which is still struggling to recover from hurricanes Irma and Maria, officials were reporting power outages and light rain by 1:30 p.m. EDT.

"Winds have picked up significantly. We're starting to get some of those heavier gusts," the governor's spokesman, Richard Motta, said in a telephone interview.

Dorian earlier had been projected to brush the western part of the U.S. territory and the change in the storm's course caught many off guard in the tiny island of Vieques just east of Puerto Rico, a popular tourist destination that now lies in Dorian's path.

"I'm in shock," Vilma Santana said, adding that she's relieved it's not a hurricane. "Thank God it's a storm."

Trump sent a tweet assuring that "We are tracking closely tropical storm Dorian as it heads, as usual, to Puerto Rico. FEMA and all others are ready, and will do a great job."

He added a jab at Puerto Rican officials who have accused the government of a slow and inadequate response to Hurricane Maria: "When they do, let them know it, and give them a big Thank You — Not like last time. That includes from the incompetent Mayor of San Juan!"

The mayor, Carmen Yulín Cruz, tweeted that Trump needs to "calm down get out of the way and make way for those of us who are actually doing the work on the ground," adding that maybe he "will understand this time around THIS IS NOT ABOUT HIM; THIS IS NOT ABOUT POLITICS; THIS IS ABOUT SAVING LIVES."

Although top government officials in Puerto Rico said they were prepared for the storm and had sufficient equipment, a couple of mayors, including those in the western region, said they did not have enough generators or shelters that were properly set up.

José Ortiz, executive director of Puerto Rico's Electric Power Authority, acknowledged that the distribution system still has weak areas and could "suffer" under winds of 50 to 60 mph. However, he stressed the agency has the needed inventory, including more than 120,000 lights, 23,000 poles and 7,400 transformers.

But Freddyson Martínez, vice president of a power workers' union, told The Associated Press that while the electric grid has improved in some areas, he worries about a lack of power line workers and post-Maria fixes that include lines affixed to palm trees.

The island's transportation secretary acknowledged that crews are still rebuilding roads damaged or blocked by Maria, including more than 1,000 that remain blocked by that storm's landslides.

Puerto Rico Gov. Wanda Vázquez urged those living in flood-prone areas or under a blue tarp to move into one of the island's 360 shelters.

"We learned our lesson quite well after Maria," Vázquez said. "We are going to be much better prepared."

In the U.S. Virgin Islands, Gov. Albert Bryan Jr. closed schools and government offices and said he would implement a curfew until Thursday, adding that officials have opened shelters and prepared sandbags in all three islands.

"The main threat in this storm is the water," he said in a conference call early Wednesday. "We still have a lot of vulnerable people in the territory."

Meanwhile, Tropical Storm Erin formed well off the U.S. East Coast on Tuesday night, and the National Hurricane Service said the storm was forecast to move northward over the open Atlantic with no immediate threat to land.

It was about 470 miles (760 kilometers) west-northwest of Bermuda and 190 miles (305 kilometers) southeast of Cape Hatteras, North Carolina, with maximum sustained winds of 35 mph (55 kph).