We’re expecting more snow this winter and waves of brutal cold thanks to periodic polar vortex visits. Mike Thomas and Tucker Barnes are breaking down what you can expect this winter.

WASHINGTON (FOX 5 DC) - Here it is, the moment we've all been waiting for - FOX 5's Winter Outlook!

- For the second winter in a row, we are calling for slightly above-normal snowfall in the Washington, DC region.

- Forecast calling for one to three winter storm warning criteria events (5-inches plus) in Washington, DC plus several smaller events. We are calling for 15 to 25 inches of snow total for the city this year.

- We are not anticipating any blizzard level events for the DC metro this year.

- The cold should come in “waves” rather than be sustained. Overall we expect that similar to last winter, temperatures should balance out to be close to normal (+/- 2 degrees) averaged across the December to February period. 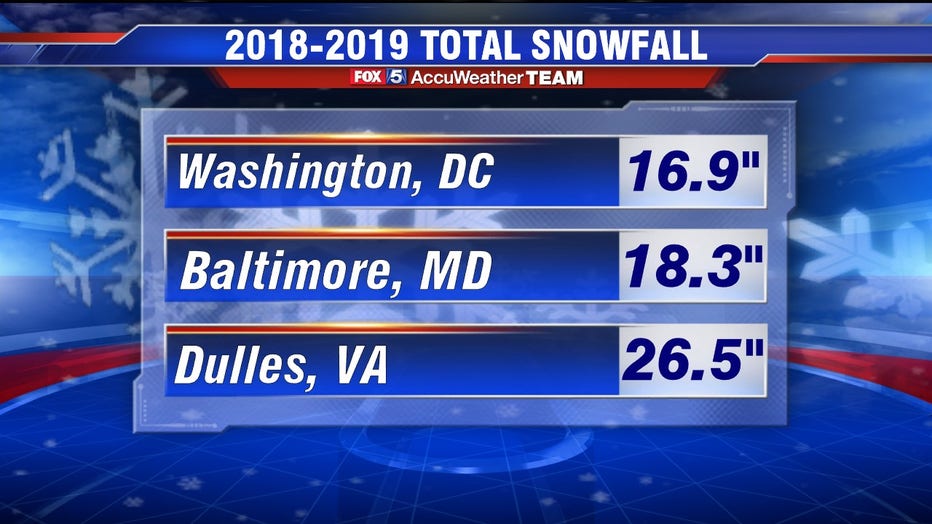 The number one question I always get is “are these things accurate at all?” The answer is both yes and no. No, nobody is ever going to 100 percent nail the winter outlook completely. The science and the modeling is not yet to the point where we can do this type of a forecast with considerable accuracy. So, instead, winter outlooks are a blend of both historical data, statistical analysis, combined with the latest long-term forecast methodology. Is it perfect? Absolutely not. But it can at least give us a rough prediction of what we can expect for the season ahead. It is not guesswork, there is science behind it, it's just not a perfect science yet. For me, personally, it is just a lot of fun using science to try and predict the future.

We can, of course, check up on it each year. So how did we do last year? We had some winnings and some failings. We did successfully call for above-normal snowfall in Washington, DC as the city picked up 16.9 inches of snow total, the most snow DC had seen since the 2015-2016 winter. We favored one memorable snowstorm (10-inches plus which we received on January 12 through 13, 2019 when a storm dropped 10.2 inches on the city.

The failings last winter mostly came in the temperature department. Winter got off as expected with warmth through December. Then big time cold in both early and later January. But February ended up coming in much more on the mild side than expected. The reason why was likely the failure of the forecast moderate El Nino during the winter months. Instead, El Nino stayed weaker and therefore did not influence the overall winter pattern as much as anticipated. We were expecting that temperatures in the December to February period would average out colder than normal, but they ended up averaging warmer than normal. 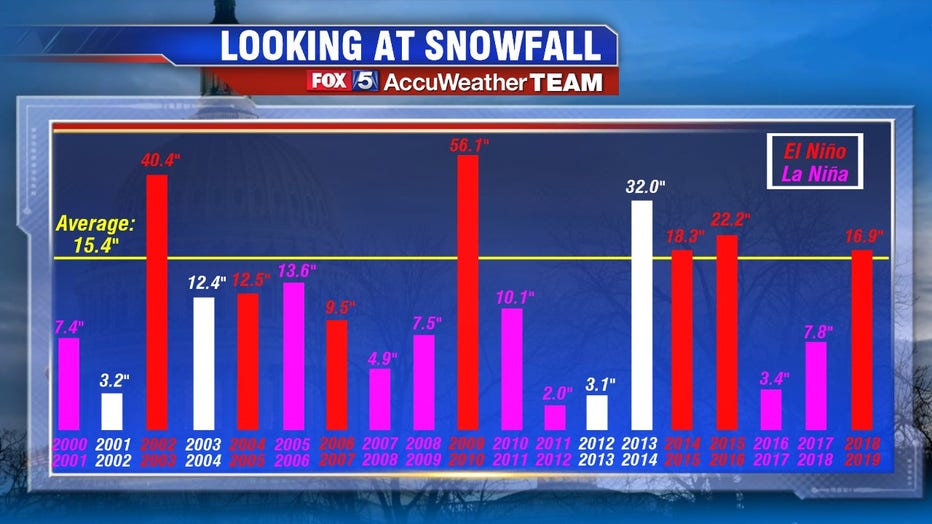 We use a number of different forecasting methods to come up with our outlook. First and foremost is looking at the water temperatures in the Pacific Ocean. Specifically the equatorial Pacific, a zone known as ENSO region. Here, we look at forecasts for whether or not we are looking at an El Nino winter (warmer than normal waters), a La Nina winter (colder than normal waters) or a neutral. Currently, all of our best climate models are consistent with the idea of a neutral-to-weak El Nino pattern through the duration of winter. Weak El Nino winters are typically cold leaning, but are not known for their big snowmakers. Here in DC, weak El Nino winters average about 1-inch less snowfall (14.2 inches total) than a “normal” winter (15.4 inches).

Another area we watch closely is the Gulf of Alaska, where water temperatures remain anomaly warm so far through the fall. Recent research has suggested that warmer than normal waters in this region are linked to stronger and longer sustained upper-level ridging in the region, which is important for us here on the East Coast because it helps buckle the jetstream down across our region. This promotes the transport of Canadian cold air down into our region, and of course, cold is an all-important ingredient for snowfall.

We have also been keeping a close eye on where we sit in our solar cycle. Our region has a history of some rough winters when they fall near the solar minimum, including the record-breaking 2009-2010 winter (56.1 inches of snow) at the end of Solar Cycle 23, and the snow-filled 1995-1996 winter (46.0 inches) at the end of Solar Cycle 22. Current sunspot analysis suggests we are awfully close to closing the book on our current solar cycle, forecast to near completion in early 2020. Research has suggested that low solar activity is liked to stronger and longer-lived upper level blocking patterns over the arctic region. Similar to the Gulf of Alaska warmth, these blocking patterns are key to providing cold air transport down into the mainland United States.

Other factors closely monitored include the advancement of the fall snowpack across Siberia and northern Europe, as research suggests a fast expanse here through fall can trigger sudden stratospheric warming events, a feature that is linked to more arctic blocking and occasional visits from the “polar vortex.” The summertime pattern was closely examined as well, which featured some persistent and strong high-latitude blocks which are forecasted to make the occasional appearance through winter. The favored storm track was examined through early fall and climate forecast models were examined for their ideas on the winter ahead. 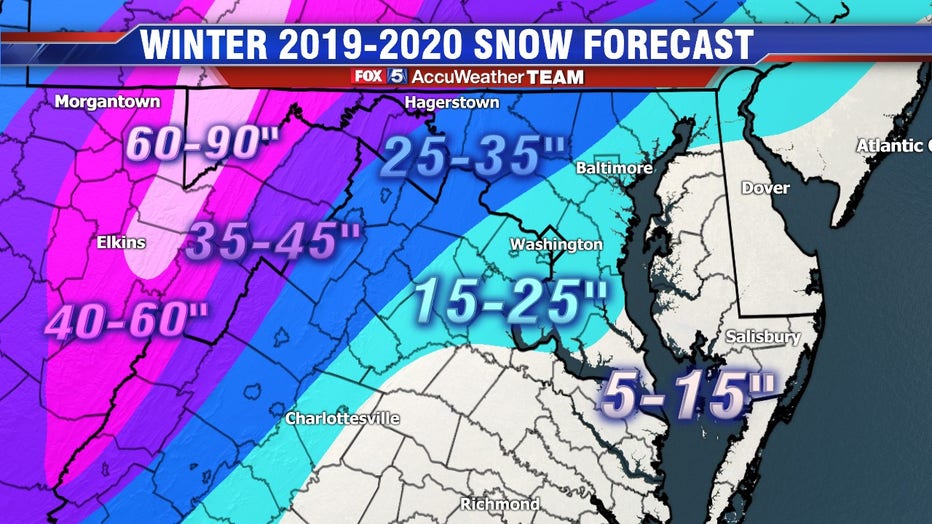 Overall expectations are that periodic bouts of high-latitude blocking will lead to waves of cold invading the eastern half of the United States, mostly during the latter half of winter. Without El Nino’s influence, we expect a feature known as the Madden-Julian Oscillation (MJO) to be the primary driver during the coming winter. The MJO has both cold and warm phases, and we expect we will spend time cycling through both. This means we expect periods of cold and dry, chilly and snow, as well as mild and wet throughout the duration of the winter. When the cold does come, though, it will likely be intense. A morning or two in the single digits here in DC would not at all be surprising, although the coldest periods should not sustain themselves more than a few days. 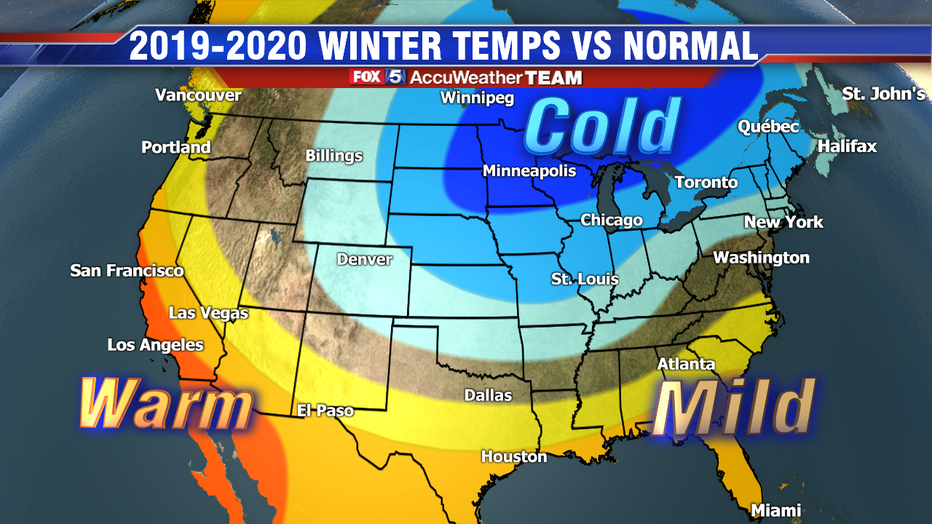 Starting with the short term, November is off to a cool start, and we see this continuing through the vast majority of the month as we expect below normal temperatures. Much like last November, parts of our region may even see their first snowfall of the year before this month is out. Do we expect anything like the winter storm that hit the region on Nov. 15th last year? No. But it’s not out of the question that some of us get some measurable snow before this month closes.

We do anticipate getting a break during the month of December, however, we do not expect to be as mild as last December, which averaged about 4 degrees above normal. We did not get any snow at all last December either. We do anticipate some this year, but nothing too overwhelming. DC averages just 2.3 inches of snow during the first month of winter, and we actually suspect we’ll come in below that number. In fact, DC has not had above average snowfall in the month of December since the record-setting blizzards of December 2009. We do not think that the streak ends this year.

January should feature colder temperatures, including periodic visits from the polar vortex. We expect more snowfall during this month as well, several small events and a mid-tier event. We don’t believe we will see as much snow as last January (11.5 inches) but think we will get close. The cold is likely to come in “waves” more so than be sustained. The coldest periods will be dry periods, not snowy ones, which is typical of visits from the polar vortex. It is in between the various changes from cold to mild and vice versa that our greatest snow chances will come.

February is the month we expect the biggest changes compared to last year. Last year we received just 3.7 inches in what is typically one of the snowier months of winter. Temperatures also came in more than 3 degrees above normal for the month. This year, while we are not anticipating a brutal February, but we are expecting colder than a normal month with above-average (5.7 inches) snowfall, and suspect the polar vortex will likely visit at least once during the course of the month. 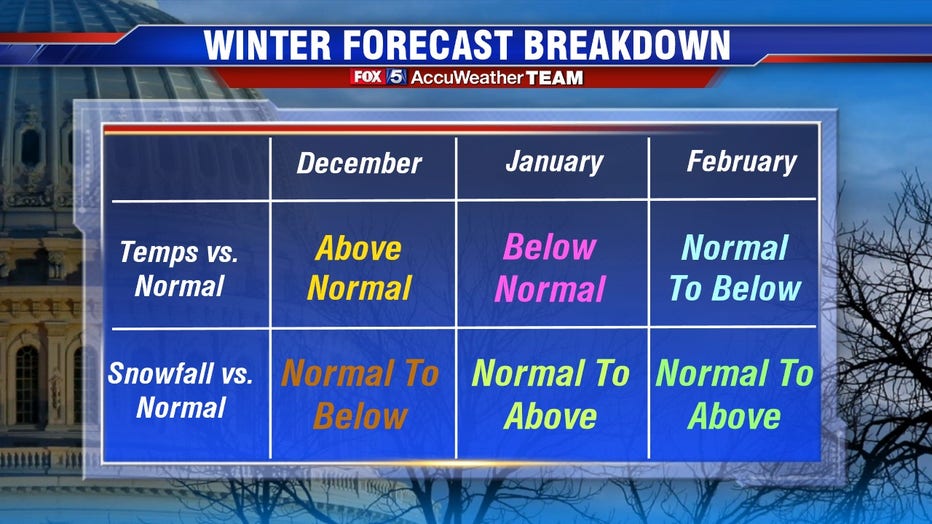 While winter will likely carry over into the first half of March as well, we are not anticipating spring to be particularly brutal this year. Without the influence of a decent El Nino pattern, we do not believe we are in store for any blockbuster storms (12-inches plus) in the District this year, although we still believe we will squeeze out a few winter storm level (5 inches) events in DC. Overall we are expecting another above-normal snow season, with 15 to 25 inches of snow total.

And that is that! Our expectations for the winter ahead. What do you think? Are you looking forward to the return of snow? How much do you think our area will get this year? Leave a comment on our FOX 5 DC social media pages to let us know!

Preparing for winter weather in the DMV

FOX 5's Josh Rosenthal was in Northwest DC Wednesday night to see how viewers are responding to the Winter Outlook!