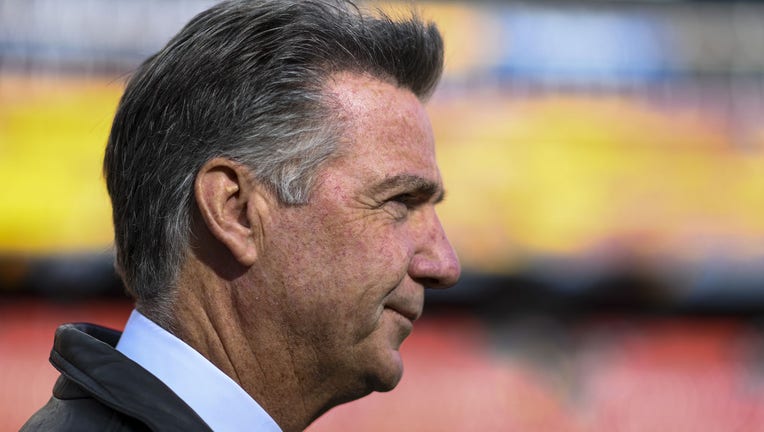 Washington Redskins Team President Bruce Allen, takes the field for the game against the Philadelphia Eagles on December 15, 2019, at FedEx Field in Landover, MD. (Photo by Mark Goldman/Icon Sportswire via Getty Images)

WASHINGTON - The Washington Redskins have officially confirmed that they have parted ways with team President Bruce Allen.

A statement released by Redskins owner Dan Snyder on Monday said Allen "has been relieved of his duties as president of the Washington Redskins and is no longer with the organization." Initial reports of the decision surfaced on Sunday.

The Redskins finished the year with a 3-13 record after they were crushed 47-16 by the Dallas Cowboys in the season's last regular-season game.

Here is the official statement from Snyder:

"As this season concludes, Bruce Allen has been relieved of his duties as president of the Washington Redskins and is no longer with the organization. Like our passionate fan base, I recognize we have not lived up to the high standards set by great Redskins teams, coaches and players who have come before us. As we reevaluate our team leadership, culture and process for winning football games, I am excited for the opportunities that lie ahead to renew our singular focus and purpose of bringing championship football back to Washington D.C."

Allen joined the Redskins late in the 2009 season.

His tenure included the acquisitions and departures of would-be franchise quarterbacks Robert Griffin III and Kirk Cousins; as well as the firings of head coaches Michael Shanahan and Jay Gruden, among other notable shifts for the Burgundy and Gold.

The Skins have won zero playoff games and lost more than 100 regular-season games during Allen's 10 seasons as team president.

VOTE HERE: Should the Washington Redskins have fired Bruce Allen?