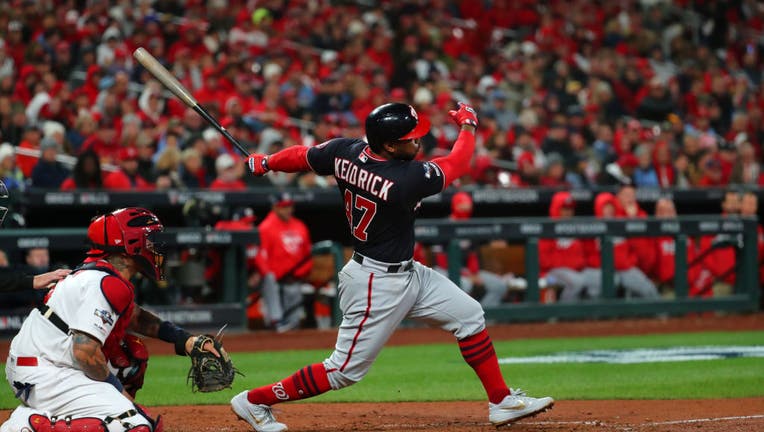 HOUSTON (AP) - Howie Kendrick is in the postseason for the eighth time in his 14 major league seasons, having played in October for three different teams. This time, he is finally on a World Series team.

"This is a dream come true," the 36-year-old utilityman, who has been in 43 playoff games, said Monday before the Washington Nationals worked out in Houston. "Been in the playoffs many times, and this is truly special."

Washington's appearance in the World Series also means the first time for Ryan Zimmerman, the first guy ever drafted by the Nationals in 2005 and the only player to wear their uniform in each of their 15 seasons.

"This has obviously been an unbelievable ride, and I'm just trying to soak it all in," the 35-year-old Zimmerman said.

They aren't the only players with more than a decade of big league service time that are World Series first-timers.

Astros reliever Joe Smith has made 782 appearances for six teams over the past 13 seasons. Asdrúbal Cabrera, who rejoined the Nationals after getting released by Texas in early August, is also in his 13th season with his sixth franchise.

Stephen Strasburg was Washington's first pick in the 2009 draft, and the pitcher made his big league debut the next season.

After leading the majors with a .274 team batting average during the regular season, the Astros hit only .208 in their two American League playoff series while making it to their second World Series in three seasons. That drops nearly 20 points without the AL Championship Series MVP.

"The playoffs aren't about statistics. It's about moments," George Springer, the 2017 World Series MVP, said Monday. "It takes only at-bat a day to help your team. One at-bat a day can impact a game."

Springer hit five home runs in that 2017 World Series after going 3 for 26 (.115) in the seven-game AL Championship Series, when he had three singles and didn't drive in a run.

The Astros are hoping for similar performances from several players going into Game 1 against the Washington Nationals on Tuesday night.

Alvarez hit .313 with 27 homers in 87 games after first joining the team in June.

Altuve, whose fifth homer this postseason came in the bottom of the ninth inning in the clinching Game 6 against the New York Yankees, is hitting .349 (14 of 43) with eight RBIs and 10 runs scored.

Alex Bregman is about 40 points below his regular season average at .257 (10 of 35). But he's got 10 walks, and his .435 on-base percentage is actually slightly higher than his mark before the playoffs.

All-Star outfielder Michael Brantley and catcher Yan Gomes were teammates together in Cleveland for six seasons, including three years ago when the Indians made it to the World Series.

They have both made it back, on opposite teams.

Brantley, who signed a two-year deal with Houston last offseason after 10 seasons in Cleveland, didn't get a chance to play in that 2016 World Series. He was limited to only 11 games early that season because of a right shoulder injury.

"This is not guaranteed to anybody," Brantley said Monday. "I didn't get to play in the last one. ... I'm just going to enjoy the experience. I don't take for granted how hard it is to get here, so I just really want to enjoy the moment and stay in the moment."

Gomes, who was with Cleveland from 2013 until getting traded last winter to Washington, was also hurt three years ago. He played in only 74 games that season because of a shoulder injury and broken hand, and after missing the AL Division Series and AL Championship Series was on the roster for the World Series and got into one game.

"We spent a lot of time that year talking, especially during the playoffs, because we were there together from '13 on, and we grinded away," Gomes said.

The Nationals are the fourth team to enter the World Series with a winning streak of at least six games in that postseason. They will try to become the first to then win the championship.

The 2014 Kansas City Royals had won eight in a row that postseason, winning the AL wild-card game before sweeping through the AL Division Series and ALCS. Their winning streak ended with a loss in Game 1 to San Francisco, which went on to take the series in seven games.

Colorado swept the NL Division Series and NL Championship Series in 2007, but the Rockies were swept by Boston in the World Series.

Detroit took a seven-game winning streak into the 2006 World Series, but fell to St. Louis in five games.

Astros reliever Ryan Pressly says he expects to be able to pitch in the World Series.

Pressly threw only one pitch in the clinching Game 6 of the ALCS on Saturday night, getting Didi Gregorius of the Yankees on a soft grounder. But the reliever had to leave the game after aggravating his surgically repaired right knee — he had the procedure in August and missed time.

"Not going into too much detail about my knee," Pressly said before a workout. "I think we'll be fine."

Manager AJ Hinch said the Astros would announce their roster prior to Game 1 on Tuesday night.

"Quite honestly, the health of Ryan Pressly is going to be key in those decisions. He's going to do some things on the field today. Hopefully get off the mound. He's feeling better. We anticipate him being available and ready to go," Hinch said.

"But until we clear him as active we're going to have to hold off on our roster," he said. "There could be a change or two either based on health or based on matchup."

Pressly was an All-Star this season, going 2-3 with a 2.32 ERA in 55 games. He struggled in the playoffs against Tampa Bay and New York, allowing four runs and six hits in 2 2/3 innings over six games.