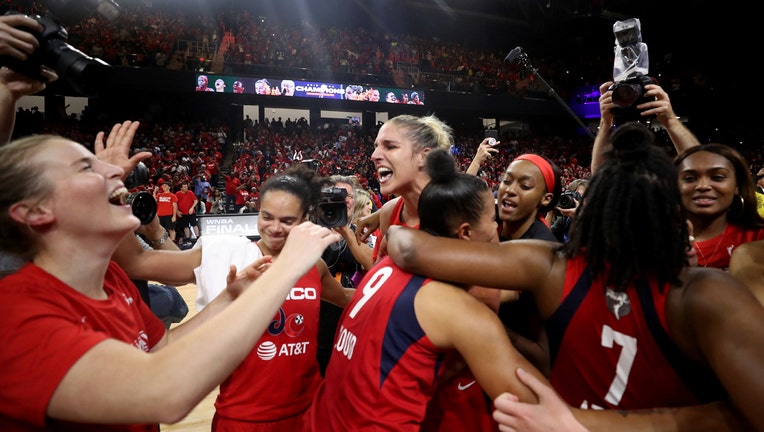 Elena Delle Donne #11 of the Washington Mystics celebrates with teammates after defeating the Connecticut Sun to win the 2019 WNBA Finals at St Elizabeths East Entertainment & Sports Arena on October 10, 2019 in Washington, DC. (Photo by Rob Carr

WASHINGTON - The Washington Mystics are waking up WNBA champions after beating the Connecticut Sun in Game 5 of the Finals Thursday night.

The championship title was the first in franchise history.

The team announced that they will hold a celebration for fans on Friday, from 2 p.m. to 4 p.m., at Entertainment and Sports Arena before the team members head out of town to join their international teams.

Emma Meesseman dropped in 22 points and league MVP Elena Delle Donne added 21 as the Mystics downed the Sun, 89-78. Delle Donne scored four points during a decisive 8-0 run that gave the Mystics an 80-72 lead with under three minutes left.

Fellow Washington, D.C. sports teams offered their congratulations on social media after the team’s championship win. The Washington Capitals, Wizards, Redskins and Nationals all tweeted celebratory message to the team.