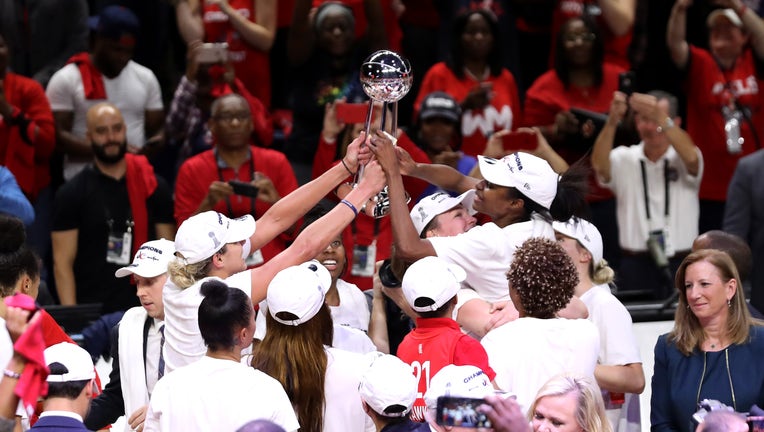 WASHINGTON (AP) - The Washington Mystics won their first WNBA championship, getting 22 points from Emma Meesseman and 21 from banged-up league MVP Elena Delle Donne to beat the Connecticut Sun 89-78 in Game 5 of the Finals on Thursday night.

It was a fitting conclusion to an entertaining series and WNBA season. This was the seventh series in league history that had gone to a deciding Game 5, and the home team has won five of them.

Delle Donne, who has been dealing with a herniated disk in her back, scored four points during a decisive 8-0 run that gave the Mystics an 80-72 lead with under three minutes left. But it was Meesseman, the soft-spoken Belgian who unveiled a new, aggressive "Playoff Emma" persona during the title run, who was named MVP of the Finals.

"I don't think I'm the missing piece. I'm their teammate (and did what) I need to do help my team win a championship. This is my family right here," she said.

Delle Donne came to Washington three years ago in a trade from Chicago, hoping to get the Mystics their first title. She grew up about an hour from the city in Delaware and wanted to be closer to home. She's been battling injuries and illnesses all season, breaking her nose early in the year. She still wears a mask to protect it. Delle Donne also wears a knee brace on her right knee after suffering a bone bruise in last year's Finals.

The victory gave coach Mike Thibault his first WNBA championship. The league's all-time winningest coach had reached the Finals three times in his career — twice with Connecticut — and last season with Washington, but fell short each time.

The game got off to a slow start with choppy play, but it picked up during a back-and-forth second half.

The Mystics trailed by nine midway through the third quarter before rallying within two at the end of the period. The teams traded the lead in the final period until Delle Donne hit a tough fadeaway midway through the quarter. After a Connecticut miss, Kristi Toliver — the only player on either team who had won a title before — drove down the lane and hit a beautiful finger-roll layup to give the Mystics a 76-72 lead.

Delle Donne added another basket, and Meesseman capped the run with a jumper.

"Emma went to work inside. Elena does what she does. You have to beat them by defending them. All the players stepped up in the fourth quarter when we needed it," Thibault said.

Connecticut could only get within six points the rest of the way.

"They were just better down the stretch," Sun coach Curt Miller said. "Defensively, it wasn't anything more than they were really physical. They were the physical team down the stretch when they needed it."

Delle Donne got the final rebound and hugged her teammates at center court as the final buzzer sounded. 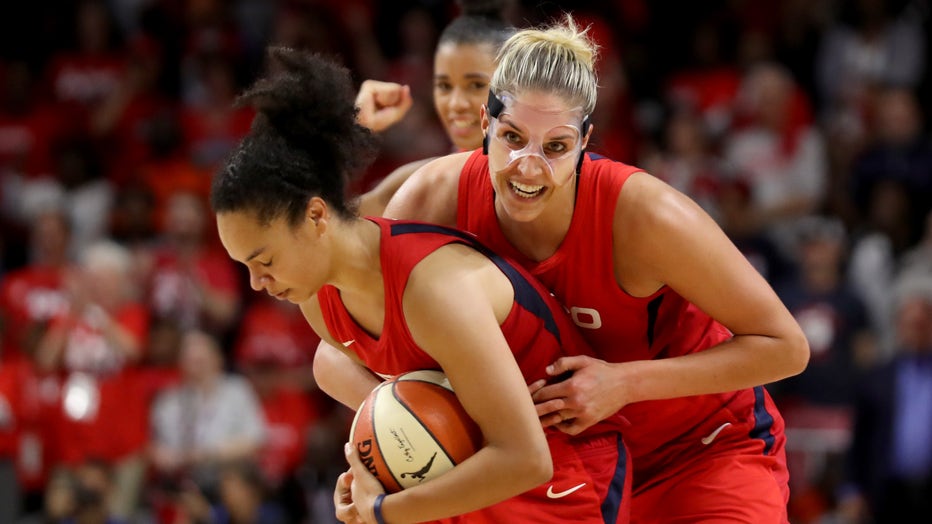 WASHINGTON, DC - OCTOBER 10: Elena Delle Donne #11 and Kristi Toliver #20 of Washington Mystics celebrate during the closing seconds of their win over the Connecticut Suns during Game Five of the 2019 WNBA Finals at St Elizabeths East Entertainment &

Jonquel Jones had 25 points for the Sun and Alyssa Thomas added 21 points and 12 rebounds.

Delle Donne said the team was aware that the only thing missing from its coach's resume was the championship and was thrilled to help give him his first.

"He's created such a family atmosphere here that the least we could do is win a title for him," she said.

The two shared a long embrace at center court as confetti rained down after the game.

Meesseman got rolling when the Mystics desperately needed her, with Connecticut leading by nine. She scored 11 points in the third period on array of post moves and outside shots to get the Mystics within 64-62 heading into the final quarter.

Meesseman said her motivation was simple.

"The trophy," she said. "It's a championship game. That's all I need. I'm just playing basketball. Today I just shot my shot."

Supreme Court Justice Elena Kagan was in the crowd. Thibault met her once on a flight and the two struck became friendly. The Mystics visited the Supreme Court in June.

Game 5 held to form with the other four as the team that led after the first quarter went on to win. Washington led 23-20 after one period and Conneticut led by one at the half. ... Mystics assistant coach Eric Thibault, Mike's son, is getting married next weekend. ... Connecticut lost in the Finals for the third time. They did it under Mike Thibault in 2004 and '05. 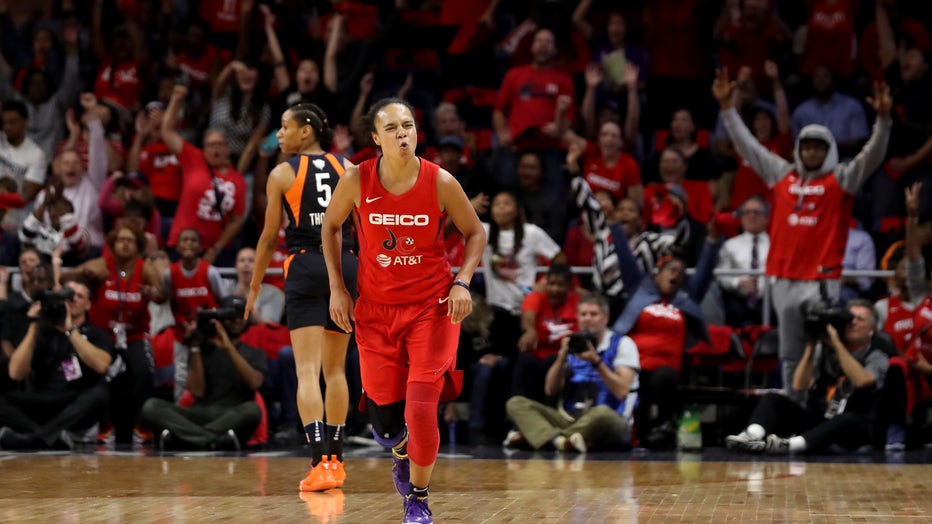 WASHINGTON, DC - OCTOBER 10: Kristi Toliver #20 of Washington Mystics celebrates after hitting a three pointer against the Connecticut Sun in the first half during Game Five of the 2019 WNBA Finals at St Elizabeths East Entertainment & Sports Are