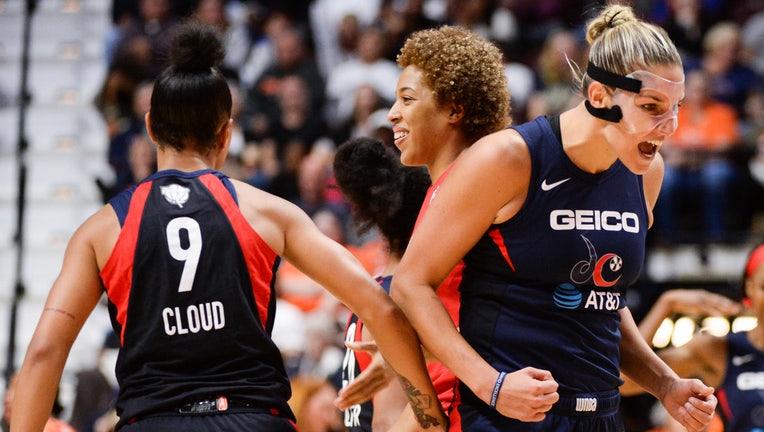 Elena Delle Donne #11 of the Washington Mystics reacts in the fourth quarter of Game 3 of the WNBA Finals during action against the Connecticut Sun at Mohegan Sun Arena on October 6, 2019 in Uncasville, Connecticut. (Photo by Kathryn Riley/Getty Imag

UNCASVILLE, Conn. - (AP) -- Washington didn't need Elena Delle Donne to be a superstar on Sunday, they just needed her to be out on the court.

The WNBA's MVP provided an emotional lift by playing through a back injury and her teammates responded with a solid effort to beat Connecticut 94-81 and move the Mystics within a victory of winning their first championship.

Delle Donne, who has a herniated disk that is pinching a nerve in her back, had not practiced since leaving Game 2 with back spasms. She finished with 13 points, hitting 5 of her 6 shots and played 26 minutes.

"I just want to be a leader for this team. I love them. I did nothing, I was just on the court, they carried me and they've done that all season long," Delle Donne said. "I love them to death. We have one more to go."

The 6-foot-5 wing was clearly limited in her movement and stayed mostly on the perimeter, but was effective enough to command the attention of Connecticut's defense.

Toliver, Emma Meesseman and Natasha Cloud carried the offense. Meesseman had 21 points off the bench, including nine to start the fourth quarter. Toliver added 20 points and 10 assists. Cloud chipped in with 19 points. The team made 16 of 27 shots from behind the arc.

Washington will try and close out the series on Tuesday night in Connecticut.

Delle Donne hit an early 3-pointer and the Mystics made six of their nine shots from behind the arc in the first quarter to take a 32-17 lead after 10 minutes.

Jonquel Jones converted a 3-point play to open the third quarter cut the lead to one, but that was as close as Connecticut would get.

They trailed by two when Delle Donne hit a 3-pointer from the left wing to make it 58-53. The Mystics took a 68-57 lead into the fourth quarter and stretched that to 18 before a final run by the Sun that Delle Donne ended with a tough layup.

"It was kind of one of those moments, like hey I might give my back up and my body up on this one, but I feel like this is such a big moment to stop that run that they're making," she said.

Shekinna Stricklen and Jasmine Thomas each had 16 points for the Sun and Bria Holmes added 15. Jones, who scored 32 points and grabbed 18 rebounds in Connecticut's Game 2 win, scored just nine points to go with her nine boards.

"When the ball was up, they just didn't care if they were getting a rebound or not, they were making sure they were hitting me, keeping me off the offensive glass," Jones said. "It hurt us that I wasn't able to get on the boards."

The 6-foot-5 Delle Donne, who averaged 19.5 points and 8.2 rebounds this season, left Tuesday's 99-87 Game 2 loss without scoring a point after playing just over three minutes in the first quarter. There were a few scary moments for her on Sunday. She went down to her knees for a loose ball just over five minutes into the game, was subbed out and went straight to the tunnel. But she returned a few minutes later. The team said it was part of the plan to keep her back warm by having her keep moving and stretch with the trainers instead of sitting on the bench.

"I was just trying to find ways to stay comfortable and stay loose," she said. "We really didn't know if I was going to be able to go today, because I hadn't done anything until right up before the game. We were able to test it a little bit and go from there."

The Mystics tied a WNBA Finals record set by the 2007 Phoenix Mercury with 16 3-pointers in a single game. The team shot 50.7 percent from the floor and 59.3 percent from 3-point range.

Washington outrebounded Connecticut 34-27 after being dominated on the boards, 41-27 in Game 2.

Washington: Delle Donne had had averaged 21.4 points and 7.6 rebounds in the Mystics' first five playoff games. She had scored at least 10 points in 23 straight playoff games before Tuesday.

Connecticut: The Sun were 15-2 at home in the regular season and swept their two semi-final games here against Los Angeles. This was the first Finals game at the Mohegan Sun since they went to back-to-back in 2004 and 2005. That team was led by current Mystics coach Mike Thibault, who spent 10 years in Uncasville before being fired in 2012.

"It's a little weird," he said. "I invested a lot while I was here. But the people I coached, the people I worked with most of them are gone. So, the same feel is not there."

Washington can win its first WNBA championship on Tuesday night on this same court.