LANDOVER, Md. - Cole Holcomb kept his eyes on Ezekiel Elliott in coverage and while rushing the passer, intercepting the ball once after it bounced off the Dallas running back and bulldozing him on the way to a sack later. 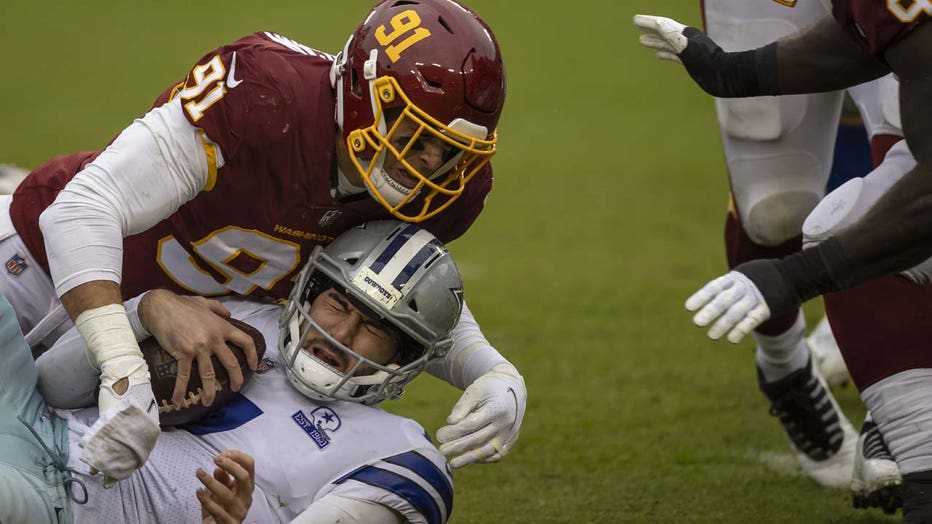 Ben DiNucci #7 of the Dallas Cowboys is sacked by Ryan Kerrigan #91 of the Washington Football Team during the second half at FedExField on October 25, 2020 in Landover, Maryland. (Photo by Scott Taetsch/Getty Images)

Holcomb and Washington's defense dominated Elliott and the Cowboys offense on Sunday, piling up six sacks, the pick and a forced fumble that became a safety in a 25-3 blowout.

That defensive play set the tone and helped Washington snap a five-game skid and deal Dallas another frustrating defeat.

“The past weeks we’ve played really well in spurts, and then we’re finally starting to get to a more consistent basis with the team," Holcomb said. “When we’re firing on all cylinders, we can be a good team.”

Montez Sweat led Washington (2-5) with two sacks and Landon Collins knocked the ball out of Andy Dalton's hands for an early safety before leaving with an ankle injury. Dalton was under siege all day behind a patchwork offensive line before being knocked out of the game in the third quarter on a shoulder-to-head hit from Jon Bostic, who was ejected.

Dalton was 9 of 19 for 75 yards before being concussed. The Cowboys said the veteran quarterback was doing better after the game than when he walked off the field and would be flying home with the team.

“He doesn’t really remember what happened," said rookie Ben DiNucci, who was 2 of 3 for 39 yards in relief of Dalton after the game was out of hand.

Washington allowed 142 total yards and put up 397 to win a game by double digits for the first time since November 2018.

A dominant defensive performance combined with rookie Antonio Gibson’s first 100-yard rushing game and a touchdown and a well-managed game by Kyle Allen were enough to put Washington back in the race in the dreadful NFC East, the first division without a three-game winner through Week 7 in a non-strike season.

“We can be right in the thick of what’s going on in our division,” coach Ron Rivera said. “Who knows? We’ll see. We’ll compete and we’ll work hard and try and get things done.”

Allen was 15 of 25 for 194 yards with TD passes to Terry McLaurin and Logan Thomas in his third consecutive start since taking over as starting quarterback.

NO RESPONSE TO BOSTIC

Flags flew and Bostic was ejected, but Cowboys coach Mike McCarthy was disappointed players didn't go after the Washington linebacker for his headshot on Dalton.

“We speak all the time about playing for one another, protecting one another," McCarthy said. "It definitely was not the response you would expect.”

Elliott wished he and his teammates had a better reaction — within reason.

Washington was the last team this season without a single-game 60-yard rusher. Gibson had 72 yards and a TD by the end of the first quarter and finished with 128 on 20 carries.

As a team, Washington picked up 208 yards on the ground while allowing just 83.

The next play after taking a swipe from Cowboys cornerback Trevon Diggs, McLaurin ran right by him for a 52-yard TD catch. The usually reserved second-year receiver conceded he gets fired up when poked and didn't hear too much jawing from Diggs the rest of the game.

Cowboys: Had an entirely different left side of the offensive line with tackle Brandon Knight (knee) and All-Pro guard Zack Martin (concussion) out. ... LBs Leighton Vander Esch and Aldon Smith each had an injury scare on the same third-quarter drive.

Washington: Collins injured his left ankle in noncontact fashion early in the second quarter. He limped off to the injury tent before being ruled out minutes later and carted off the sideline with his helmet on and head down. ... Sweat was evaluated for a concussion in the second half.

Dallas defensive tackle Dontari Poe took a knee during the national anthem, while Collins and Washington offensive lineman Keith Ismael were among those who raised a fist in the air.

The Cowboys visit the 2-4-1 first-place Philadelphia Eagles next Sunday, while Washington next plays the New York Giants at home Nov. 8 after its bye week. It will be the first game at FedEx Field this season with fans allowed, as the team is selling 3,000 seats to season-ticket holders.