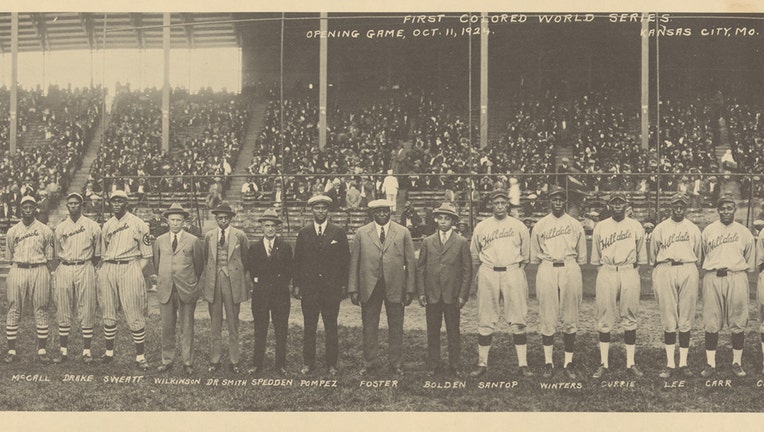 Players and staff from the Monarchs and the Hilldale baseball teams before the opening game of the 1924 Colored World Series, Kansas City, Mo., Oct. 11, 1924. (From the William A. Gladstone collection of African American photographs Panoramic photogr (Public Domain)

SABR established the task force in December after Major League Baseball announced on Dec. 16 that it was reclassifying the Negro Leagues as majors. In 1969, a special committee on baseball records identified six official major leagues dating to 1876. But at that time, the committee excluded the Negro Leagues.

"It is MLB's view that the Committee's 1969 omission of the Negro Leagues from consideration was clearly an error that demands today's designation," the league said in its December announcement.

SABR recommended the change in status for the following leagues:

SABR used these criteria in making its recommendation: "a league of high quality, containing a large number of the best available baseball players, with a defined set of teams and a defined roster of players. Teams should have played a set schedule, with the league maintaining standings and records, some of which may no longer be available."

"SABR and its members are committed to the preservation and accurate telling of all of baseball's history," CEO Scott Bush said in a statement.

Get breaking news alerts in the FOX 5 NY News app. Download for FREE!

MLB and its statistician, the Elias Sports Bureau, have started a review process. These are examples of how the stats of prominent players could change:

The Negro Leagues began to dissolve one year after Jackie Robinson broke MLB's color barrier with the Brooklyn Dodgers in 1947.

"While the skill of Negro Leaguers has never been in question," Bush said, "this change helps ensure these players are aligned with their rightful peers and provides guidance on how to better tell the story of segregated baseball."

SABR's task force will continue to study other teams and leagues from the sport's segregated era, which includes pre-1920 and post-1948, and top independent Black teams, which often laced up against white major-league players and teams in the 1930s.

"Some Black baseball teams were forced to operate independently in order to survive, as the color barrier enacted by White officials both necessitated the Negro Leagues' existence and later led to their demise," SABR said in a statement.

SABR is revising its Style Guide to explain how writers, editors, and fact-checkers for the Baseball Research Journal and all other SABR publications should use the terms "Major League" and "major league."

"Future SABR research should take care that any claims it makes about the 'major leagues' — best second baseman of the 1920s, number of New Yorkers who have won batting titles — includes all of the major leagues unless care is taken with how the claim is specified," SABR said in its statement. "The task force will be soliciting feedback from SABR's research committee chairs on how this designation will affect their work."

With The Associated Press