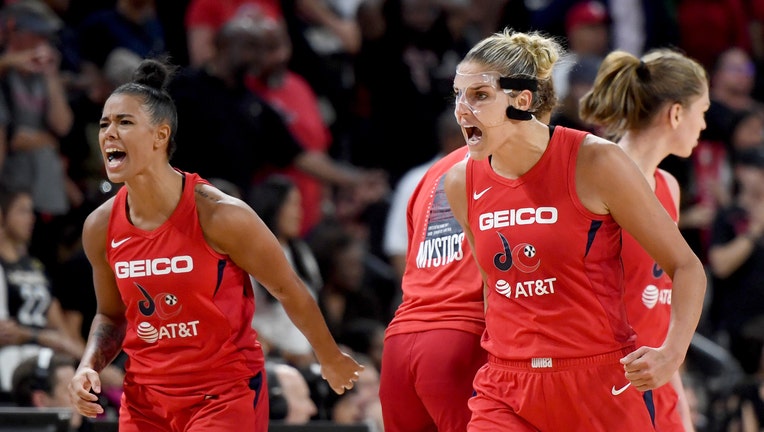 Natasha Cloud (L) #9 and Elena Delle Donne #11 of the Washington Mystics react after the team scored against the Las Vegas Aces during Game Four of the 2019 WNBA Playoff semifinals. (Photo by Ethan Miller/Getty Images)

A year after getting swept in the WNBA Finals, Elena Delle Donne and the Washington Mystics are back.

The Mystics will face the Connecticut Sun as the top two teams in the regular season meet for the championship. Game 1 of the best-of-five series is Sunday in Washington.

The Mystics lost in three games to the Seattle Storm last season, when Delle Donne was dealing with a bone bruise in her knee. This year, the league's MVP is healthy and raring to win her first title. She expects to get help from Emma Meesseman, who missed the 2018 season while preparing for the Women's World Cup with Belgium.

"We didn't have Emma. We're a different team when she's on it," Delle Donne said. "We got a really good Connecticut team coming in. They are playing really great basketball. We'll focus on them and figure some things out."

Meesseman was a huge reason the Mystics were able to advance past Las Vegas, winning the series on Tuesday night. She had 22 points in the clincher.

The Mystics and Sun played three times in the regular season, with Connecticut winning twice. Washington won the final matchup by a whopping 43 points. The two teams haven't played since June 29.

While Washington had to work to put away Las Vegas, Connecticut cruised through the semifinals, sweeping Los Angeles in three games. After getting ousted in single-elimination playoff games the previous few years, the Sun were determined to get one of the top two seeds and the double-bye that goes with it. After finishing with the second-best record behind Washington in the regular season, Connecticut accomplished that.

The Sun have benefited by having a healthy year from their starting lineup; the team used the same five players to begin every game. Jasmine Thomas, Alyssa Thomas, Shekinna Stricklen, Courtney Williams and Jonquel Jones all have the ability to have big games, making them tough to game plan against.

That's what coach Curt Miller expected when he took over the team in 2016.

"This was our vision," Miller said after finishing off the sweep Sunday.