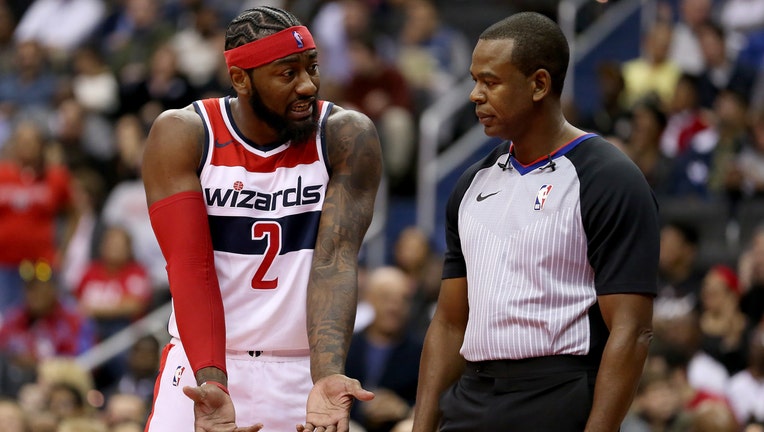 WASHINGTON (AP) -- Kelly Olynyk certainly wasn't counting on Dwyane Wade to miss. When Wade did, Olynyk was in the perfect spot.

Olynyk grabbed the rebound off Wade's errant turnaround jumper and layed in the go-ahead basket with 0.2 seconds left Thursday night, lifting the Miami Heat to a ragged 113-112 victory over the Washington Wizards, who probably could have used sidelined center Dwight Howard's rebounding skills in their season opener.

Olynyk was booed every time he touched the ball, on account of a past playoff fracas with the Wizards when he was with the Boston Celtics. He certainly got to enjoy the way this game ended, after Miami trailed by as many as nine points.

"As a rebounder, you got to assume a miss, but I thought he was going to make it, for sure," Olynyk said. "I was surprised I was that open. I kind of just popped loose, and you're kind of just standing right there. Right place, right time."

It was a fitting conclusion to a game in which Miami outrebounded Washington 55-40 overall and a "Did I read that correctly?!" 22-7 on the offensive glass, leading to a 27-10 edge in second-chance points.

"That's really where they killed us," said John Wall, who led the Wizards with 26 points and nine assists and combined with Bradley Beal to score the hosts' last eight points.

"Anytime you lose by a shot like that at the end ... that's very devastating," Wall said.

With new starting center Howard still sidelined by a sore backside that kept him out of all of training camp and the preseason, and backup Ian Mahinmi on the bench, Washington's small-ball lineup was unable to prevent Olynyck, a 7-footer, from getting the rebound that settled things.

The 6-foot-10 Markieff Morris, normally a power forward, was at center. Morris pointed at himself and 6-9 reserve Jeff Green as the culprits for letting Olynyk into the pain unencumbered.

"That might have been the easiest layup of the game," Morris said.

"We've got to find a way to grab that rebound," he said. "They outhustled us. That's pretty much it."

And that's even though the Wizards were playing their first game at home, while the Heat were playing on the second night of a back-to-back road trip after losing at Orlando on Wednesday.

Heat: Josh Richardson led Miami with 28 points, Rodney McGruder added 20, and that pair hit consecutive 3s late in the fourth quarter. ... Coach Eric Spoelstra was asked beforehand about Wade, 36, appearing in both ends of the season-opening back-to-back. "Right now, it's Game 2. He wants to play. We want him to play," Spoelstra said. "And he's in great shape, he feels good, so he's able to go." ... Derrick Jones Jr. scored 17 points, while Hassan Whiteside had nine points and 10 rebounds.

Wizards: Ian Mahnimi started for Howard, but picked up his fourth foul 15 seconds into the third quarter. By quarter's end, four Wizards -- three starters -- each had four personal fouls. Mahinmi ended up playing about 11 1/2 minutes, with three points and one rebound. ... F Kelly Oubre Jr. was the first substitute used by Washington, entering for Otto Porter Jr. midway through the first quarter.

WHERE ARE THE 3S?

Wizards coach Scott Brooks put an emphasis on pleading with his players to shoot more 3s this season. Didn't work. At least not in Game 1. Washington was only 7 for 26 from beyond the arc. Porter, who was specifically given a green light by Brooks did not attempt a single 3. "Other than offensive rebounds and missing 3s, I think we should have won the game," Wall said. Oh, other than that, Mr. Wall, how was the play?

WNBA All-Star Kristi Toliver made her regular-season debut as an assistant coach on Scott Brooks' staff. "I love her. Our staff loves her. Our players feel the same way," Brooks said. "She adds value to our program. She's very talented. She loves the game. She's passionate. And she wants to learn. She has this incredible desire to get better."

Wizards: Host Toronto on Saturday in a rematch from last season's playoffs.