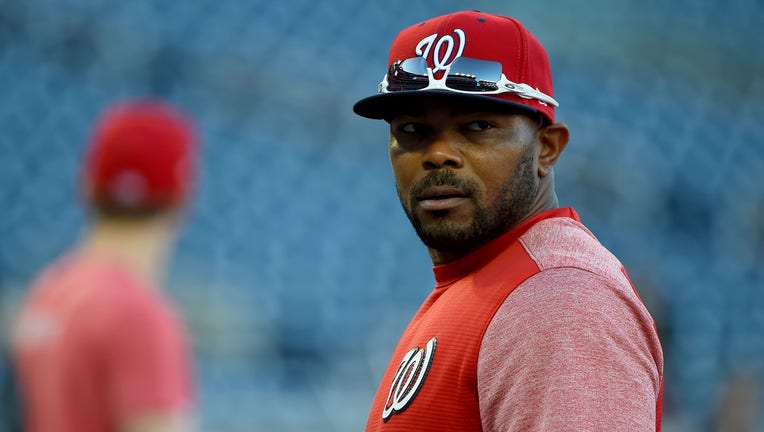 WASHINGTON, DC - OCTOBER 15: Howie Kendrick #47 of the Washington Nationals looks on prior to playing against the St. Louis Cardinals in Game Four of the National League Championship Series at Nationals Park on October 15, 2019 in Washington, DC. (Ph

WASHINGTON - Postseason star Howie Kendrick and the World Series champion Washington Nationals agreed to a $6.25 million, one-year contract, according to two people with knowledge of the negotiations.

Speaking on condition of anonymity Friday because the deal was still pending a successful physical exam, the people confirmed to The Associated Press that an agreement was in place for Kendrick to return to Washington for what will be his 15th season in the majors.

One of the people said the contract includes a mutual option for 2021.

The 36-year-old Kendrick, who was a free agent, provides Washington with a middle-of-the-order bat and some flexibility in the field. He primarily plays at first base now, but started games at every infield position except shortstop in 2019.

The righty batter hit .344 with 17 homers and 62 RBIs in 121 regular-season games before all of his postseason contributions provided some real pop in the postseason. He hit a tiebreaking grand slam off Joe Kelly in the 10th inning of Game 5 of the NL Division Series to lead the Nationals to a 7-3 victory over the Los Angeles Dodgers.

It was only the second extra-inning slam in postseason history and allowed the Nationals to win a playoff series for the first time since moving to Washington from Montreal in 2005.

Kendrick followed that up by earning MVP honors in the NL Championship Series for batting .333 with four doubles and four RBIs as the Nationals swept the St. Louis Cardinals in four games.

Eight years removed from his only All-Star appearance, Kendrick was clutch in the Fall Classic, delivering a go-ahead, two-run homer off Will Harris in the seventh inning of Game 7, helping the Nationals beat the Houston Astros 6-2 on the road for the franchise’s first World Series championship.

His shot off Harris hit the screen on the foul pole in right field, making Kendrick just the second player in a winner-take-all World Series game to hit a home run that took his team from trailing to leading in the seventh inning or later.

Kendrick arrived in Washington via trade in July 2017, then re-signed with the Nationals following that season. In 2018, he tore his right Achilles tendon during a game in May, but his return to action in 2019 was quite a success.