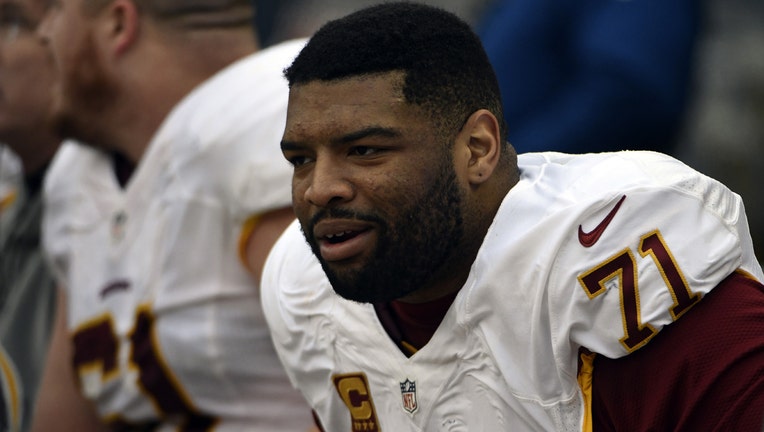 Redskins Tackle Trent Williams on the sidelines during a 2016 game against the Chicago Bears. (David Banks/Getty Images)

Asked if the team would trade its starting left tackle, Washington's coach said Saturday, "I would seriously doubt that, so no." But exactly what it will take to get Williams to training camp remains something of a mystery.

"I do not have an understanding of what it would take to get him back here," Gruden said. "If I did, he'd be back here."

Williams is reportedly upset about the team's handling of his health, including the removal of a growth on his head this year. Williams has two years left on his contract, but the standoff appears more complicated than other holdouts around the league because money isn't the only focus.

The team last week denied a report that Williams no longer trusts Redskins President Bruce Allen or the medical team and informed the Redskins he didn't intend to play for them again.

Despite Williams' absence and the signings of offensive tackles Donald Penn and Corey Robinson , Gruden says Saturday he's still optimistic — "very optimistic" about Williams reporting to camp. Asked why he was optimistic, Gruden provided no answer.

Last month, Allen said only this about Williams' status: "He has a contract. I'll leave it that Trent and I have talked."

Williams is being fined $40,000 for each day of camp he misses. And he's very much missed by teammates.

"Trent, he is the best left tackle in the league," said guard Brandon Scherff, whose own status is uncertain with a year left on his contract. "He helped us so much and we miss him, but it is a business. He's got to do what he got and we just hope he comes back."