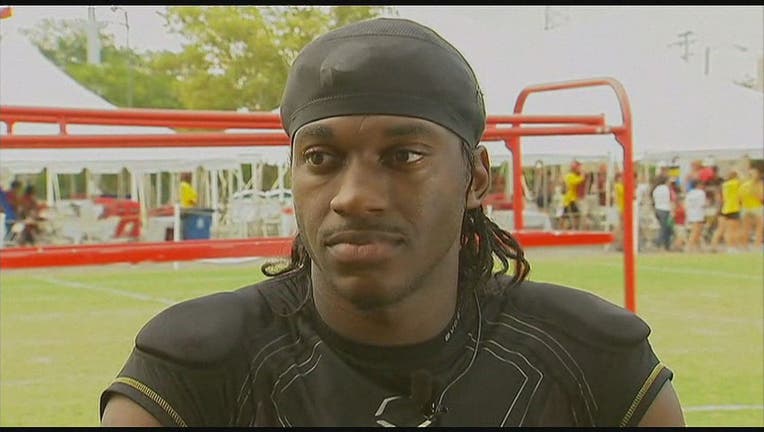 Griffin was cut by the Washington Redskins on Monday, ending a tumultuous tenure in which the No. 2 overall draft pick immediately became an NFL star in 2012 before his career spiraled to the point where he spent all last season on the sideline because of injuries and inconsistency.

The people spoke to the AP on condition of anonymity because the team does not announce player visits.

One of the people told the AP that the Jets' focus remained on re-signing Ryan Fitzpatrick, who set a franchise record with 31 touchdown passes last season, and the move to give Griffin a look is simply the team doing its due diligence.

It could also be leverage for the Jets and general manager Mike Maccagnan, who are locked in a stalemate with Fitzpatrick over his value. The veteran quarterback said last season that he'd like to return to New York, something coach Todd Bowles echoed from the team's standpoint.

But, the question has become: at what cost?

The 33-year-old Fitzpatrick has been mostly a journeyman throughout his career, with the Jets being his sixth NFL team. But he thrived in New York after being reunited last year with offensive coordinator Chan Gailey, with whom he had his previous best years in Buffalo.

Fitzpatrick could be seeking considerably more than what Philadelphia gave to the unproven Chase Daniel, who got a three-year deal worth $21 million with incentives. It's unclear if the Jets are willing to go much higher than that.

Griffin, who is still only 26, could come cheaply considering his stunning decline in Washington.

He was the Heisman Trophy winner at Baylor in 2011 and Washington traded three first-round picks plus a second-rounder to St. Louis to move up to No. 2 overall and draft Griffin. He won the AP Offensive Rookie of the Year award in 2012 while leading the Redskins to the NFC East title and immediately establishing himself as one of the league's most dynamic players with 20 touchdown passes while running for 815 yards and seven other scores.

But he tore ligaments in his right knee late that season, and he hasn't approached the success he had that year. A dislocated left ankle also limited him to nine games in 2014.

Griffin spent all last season on the sideline behind Kirk Cousins and even Colt McCoy, and didn't take a single snap in a regular-season game. By cutting Griffin, the Redskins saved $16 million off their payroll for this season.

In parts of four NFL seasons, Griffin has thrown for 8,097 yards and 40 TDs with 23 interceptions, and run for 1,480 yards and eight scores.

The Jets also have Geno Smith, their former starter who was a second-round pick in 2013, and Bryce Petty, a fourth-rounder last year, at the quarterback spot. It's not clear if Griffin would potentially be brought in to compete as a starter or perhaps with Smith and Petty as the backup if Fitzpatrick is re-signed.

The Jets have lost two of their key players from last season's 10-6 team in free agency, including running back Chris Ivory, who signed with Jacksonville, and nose tackle Damon Harrison, who joined the Giants.