Vincent Jackson diagnosed with CTE before his death

TAMPA, Fla. - Earlier this year, the family of the former Tampa Bay Buccaneers player Vincent Jackson donated his brain to scientists to understand what may have led up to his death in February. On Thursday, they revealed he was battling stage 2 CTE.

For years, he suffered from memory loss, erratic behavior, and was relying on alcohol, his wife, Lindsay, revealed during an interview with ABC News.

"He shared with me once that alcohol made him feel calm," she explained, "and made him feel like himself and that his brain was really fuzzy and this made it not fuzzy."

The family said they wanted to publicly release the findings of his brain study to help raise awareness for CTE and risks.

Deputies are investigating the death of former Tampa Bay Buccaneers player Vincent Jackson, who was found dead in a Brandon hotel room on Monday.

Dr. Dan Daneshvar, a neuroscientist, brain injury physician with Havard Medical School, told FOX 13 the disease is common in football players who have had too many hits to the head.

Vincent played 12 seasons in the NFL, five of those seasons were with the Bucs. He retired in 2018. According to Boston University, where his brain was studied, the odds of a football player developing CTE could increase as much as 30% for each year they play.

A few days ago, doctors announced ex-NFL player Phillip Adams also had stage two CTE injuries when he shot and killed six people before turning the gun on himself.

Aaron Hernandez suffered the most severe case of CTE ever known. The former New England Patriots tight end hanged himself in a prison cell while serving a life sentence for the murder of Odin Lloyd in 2013.

Lindsey said her late husband's results were a surprise, considering he was never diagnosed with a concussion during his professional football career.

The Jackson family says they wanted to release the findings publicly to help raise awareness. The odds of a football player developing CTE could increase as much as 30% for each year they play.

"It all made sense. He didn’t know he had it. I think had he known he wouldn’t have felt so ashamed," she said during the ABC News interview while tearing up, "or alone. No one should have to die in a room by himself."

Vincent Jackson's family is donating his brain to researchers at Boston University. They'll look for signs of Chronic Traumatic Encephalopathy.

The results showed he had multiple areas in the brain that was affected.

Dr. Ann McKee, chief of neuropathology for the VA Boston Healthcare System and director of the BU CTE, said in a statement to the Concussion Legacy Foundation, that Vincent's life began to change in his mid-30s. She said he became depressed, had memory loss, paranoia and eventually began to experience extreme social isolation.

During Dr. McKee's interview with ABC News, she said "The NFL needs to overhaul their awareness campaign to concentrate on repetitive head hits that don’t rise to the level of concussion."

"The NFL continues to mourn with the [family] of Vincent Jackson. There is more to learn about head injury and relate illness, and while the NFL is funding that important work, we also continue to make tangible progress in protecting players and making our game safer."

Experts say it’s important for football officials at every level to try and reduce repeated impacts to the head, which is why Jackson’s family supports a program for parents to wait to enroll their children in tackle football until age 14.

Lindsey revealed during her interview that the couple decided they needed a break earlier this year. Vincent was staying at a Tampa-area hotel while his family became concerned about his mental health.

According to Hillsborough County deputies, he checked into the hotel on January 11, 2021.

On Feb. 10, 2021, his family reported him missing and a formal report was filed the next day.

On Feb. 12, deputies located him at the hotel, spoke to him and canceled the missing person case. 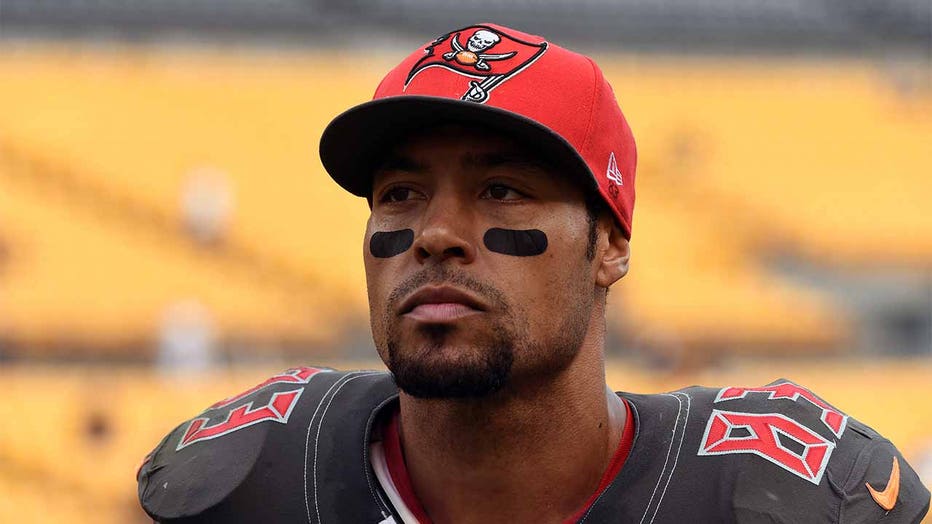 PITTSBURGH, PA - SEPTEMBER 28: Wide receiver Vincent Jackson #83 of the Tampa Bay Buccaneers looks on from the field after a game against the Pittsburgh Steelers at Heinz Field on September 28, 2014 in Pittsburgh, Pennsylvania. The Buccaneers defeate

At the time, the sheriff’s office said there were no apparent signs of trauma. ABC News reports the final autopsy report will be released Thursday.

The Buccaneers soon released a statement, saying the team was "shocked and saddened to hear the terrible news" of Jackson's death.

"During his five seasons with our franchise, Vincent was a consummate professional, who took a great deal of pride in his performance on and off the football field. Vincent was a dedicated father, husband, businessman and philanthropist, who made a deep impact on our community through his unyielding advocacy for military families, supported by the Jackson in Action 83 Foundation," the team's statement read.

"That’s a hard day," Lindsay told ABC News. "We had the sheriff come to our house and let us know. I had been telling the kids and letting them know that dad was really sick and he’s going to get better. He was going to be back and here they are in our living room, telling us that’s not the case."
Vincent was a three-time Pro Bowl selection for the Bucs, but the team said "his greatest achievements as a Buccaneer were the four consecutive nominations he earned as our Walter Payton Man of the Year."

His charity in Tampa Bay continues without him. In July, the 8th annual Jackson in Action 83 Foundation’s Youth in Action Camp was held at Heroes Paradise in Brandon.

Military children have day to play in Brandon

Jackson in Action 83 Foundation hosted the 8th Annual Youth in Camp event at a Brandon laser tag venue. This charity is the late Vincent Jackson’s organization.

It’s a day dedicated to children of military families.