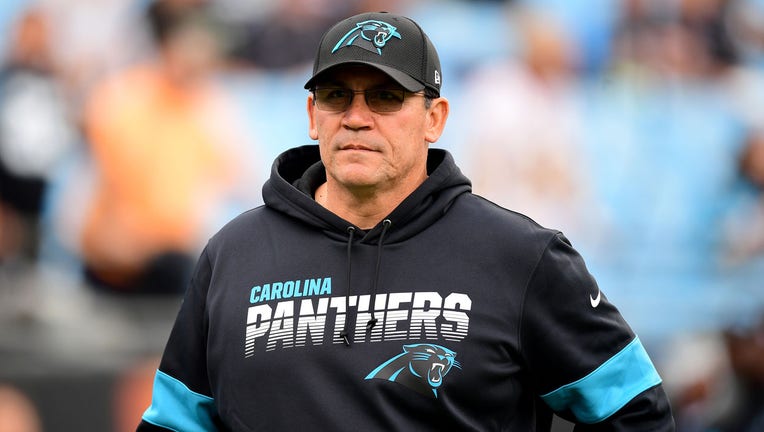 Head coach Ron Rivera of the Carolina Panthers before their game against the Washington Redskins at Bank of America Stadium on December 01, 2019 in Charlotte, North Carolina. (Photo by Jacob Kupferman/Getty Images)

WASHINGTON - The Washington Redskins, who officially parted ways with team President Bruce Allen on Monday, may have found their next head coach.

According to a tweet from ESPN's Adam Schefter, former Carolina Panthers coach Ron Rivera is expected to be hired by the team for the position. (VOTE HERE: Should the Washington Redskins hire Ron Rivera?)

Rivera coached the Panthers for the past nine seasons and took them to a Super Bowl before being fired earlier this month.

Rivera would replace Jay Gruden who was fired after a 0-5 start to the season. Interim coach Bill Callahan went 3-8 the rest of the way.

After a season-ending 47-16 loss to the Dallas Cowboys, Callahan said he hadn't been told anything about his future. "There will be a time and place for that," Callahan said. "I'm just blessed that I've been coaching for 42 years and I take each day as a blessing. ... Coaching's different because it's about change. It's about transitioning, and so I understand that. I get that aspect of coaching."

Rivera, who went 76-63-1 with Carolina, is a minority candidate

The team has complied with the NFL's Rooney Rule by interviewing Rivera, who is a minority candidate, and are free to hire him. In his time with Carolina, Rivera went 76-63-1.