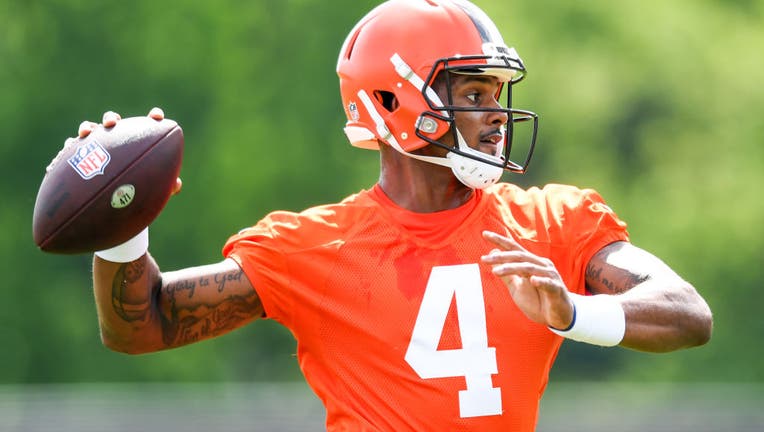 HOUSTON (AP) - Deshaun Watson’s complex legal situation has the Cleveland Browns in limbo and unclear about the quarterback’s immediate future.

This comes after a 24th woman filed a civil lawsuit Monday alleging sexual misconduct by Watson, who is also awaiting possible discipline from the NFL.

NFL Commissioner Roger Goodell says former Houston Texans quarterback Deshaun Watson is still under investigation by the NFL and could still be disciplined under the league’s personal conduct policy.

The latest lawsuit was filed in Houston by attorney Tony Buzbee, who is representing all 24 women.

"Lost in the media frenzy surrounding Deshaun Watson is that these are twenty-four strong, courageous women who, despite ridicule, legal shenanigans, and intense media scrutiny, continue to stand firm for what is right," Buzbee said in a statement.

Watson has been accused by massage therapists of harassing, assaulting or touching them during appointments when he was with the Houston Texans, according to new details contained in a report by The New York Times.

The latest lawsuit makes similar allegations as the woman, a massage therapist, accuses Watson of assaulting and harassing her during an August 2020 session in her apartment. The woman alleges that during the massage session, Watson exposed himself and masturbated and "offered no apology or explanation for his conduct."

When asked if he would go to therapy or counseling, Deshaun Watson dismissed the idea because he feels he’s been falsely accused of sexual misconduct by 22 women. "I don’t have a problem," the new Cleveland Browns quarterback said. "I don’t have an issue."

In an article published Tuesday, the Times reported Watson booked appointments for massages with 66 women over a 17-month period. The list of women includes the 24 who have filed lawsuits, with two of those being added in the past week.

Watson has denied all wrongdoing and two grand juries in Texas declined to indict him on criminal complaints.

After signing autographs for school kids and fans on the field following practice Wednesday, Watson, who has not spoken to the media since March 25, declined to comment to the AP about the latest report.

Watson said he preferred that any statements come from his lawyer, Rusty Hardin, or agent, David Mulugheta.

For the first time, Deshaun Watson answers questions regarding the sexual misconduct allegations against him during his Cleveland Browns introductory news conference.

Hardin’s office did not immediately respond to a request for comment.

Browns Coach Kevin Stefanski was asked direct questions about the latest Watson allegations. As he has done for weeks, the third-year coach provided little insight and stuck to comments about "respecting the legal process" and "letting the investigation play out."

Since acquiring Watson, the Browns have said they were comfortable with what they learned about the 26-year-old during their own investigation.

Stefanski wouldn’t say if the new allegations changed the team’s stance with Watson or his standing.

This is the third straight week Cleveland’s media availability has come a day after a major development in Watson’s case.

At the introductory news conference for Deshaun Watson, Cleveland Browns general manager Andrew Berry addressed the decision to hire the quarterback in light of the sexual misconduct allegations made against him.

Two weeks ago, a pair of massage therapists gave graphic details of encounters with him during an interview with HBO’s "Real Sports with Bryant Gumbel," and last week the 23rd lawsuit was filed as the Browns held OTAs.

Stefanski was asked if he was frustrated with handling questions while general manager Andrew Berry and owner Jimmy Haslam have been silent.

"I wouldn’t characterize it that way and I do understand that you have a job to do," he said. "So just going to provide as much information as I can, when I can."