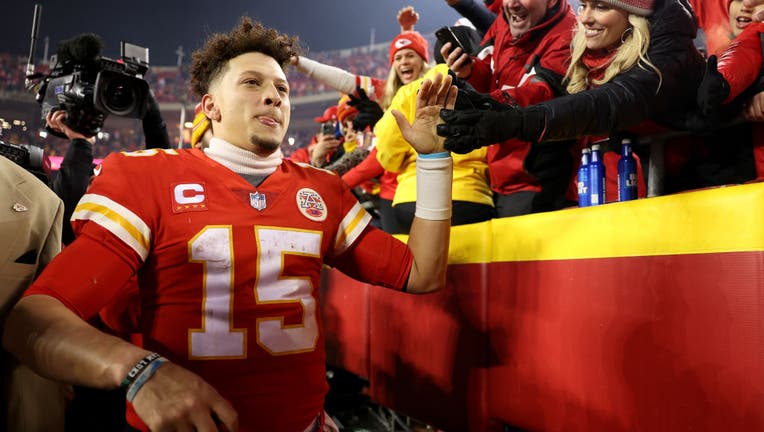 KANSAS CITY, MISSOURI - JANUARY 23: Patrick Mahomes #15 of the Kansas City Chiefs celebrates with fans after defeating the Buffalo Bills in the AFC Divisional Playoff game at Arrowhead Stadium on January 23, 2022 in Kansas City, Missouri. The Kansas

KANSAS CITY, Mo. - Patrick Mahomes found Travis Kelce in the corner of the end zone early in overtime, and the Kansas City Chiefs rallied to beat the Buffalo Bills 42-36 on Sunday night in a sizzling finish to a wild divisional-round weekend.

The lead changed hands three times in the final two minutes of regulation before Harrison Butker, who earlier missed a field goal and extra point, drilled a 49-yarder for Kansas City as time expired to force overtime.

The Chiefs won the coin toss, marched swiftly downfield against the NFL's top-ranked but exhausted defense, and right into their fourth straight AFC title game. They'll play the Bengals next Sunday night for a spot in the Super Bowl.

Super Bowl LVI: Everything you need to know

Mahomes finished with 378 yards passing and three touchdowns, including a 64-yarder to Tyreek Hill during the thrilling final minutes of regulation. The Chiefs ended the Bills' season inside Arrowhead Stadium for the second straight year.

Josh Allen did everything in his power to prevent it. He threw a go-ahead touchdown pass to Gabriel Davis with 1:54 left in the regulation, then another to Davis — his playoff-record fourth TD catch — with 13 seconds remaining.

Yet that was enough time for the Chiefs to set up Butker's tying kick.

Allen finished with 329 yards passing, and Davis with eight catches for 201 yards, in a loss even more devastating than their defeat to Kansas City in last year's AFC title game.