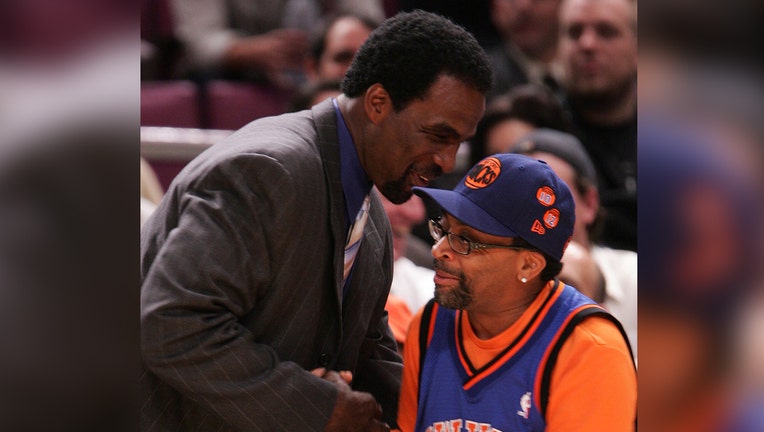 NEW YORK - Spike Lee bailed on his New York Knicks' courtside seat for the rest of the season. Maybe he can commiserate with former Knicks enforcer Charles Oakley, anywhere but inside Madison Square Garden.

Lee had enough of being held by security in a dispute over his proper entrance to a Knicks game when he invoked the name of executive chairman James Dolan's No. 1 nemesis and fellow Garden agitator.

"You want to arrest me like Charles Oakley?" Lee shouted at security Monday night.

The wild scene at MSG was enough to trigger Oakley, who had his spat in 2017 when he was arrested after an altercation with security officials. Watching Lee, the Oscar-winning writer-director, go through another dust-up had Oakley feeling as if he was in some sort of sequel to He Got (Kicked Out of The) Game.

"It's got to be stopped in some kind of way," Oakley told The Associated Press in a phone interview Tuesday night. "The NBA has got to take a look at this. You can't keep closing your eyes to this. This is like, turn your head if you see someone beat somebody up and you just keep walking. It just keeps happening in New York. People are not going to come here because it's the same thing over and over and over. They got a new president and all everyone is talking about what happened between Spike Lee and the Garden."

The incident occurred on the first night on the job for Leon Rose, the longtime player agent who was hired Monday as team president.

Oakley's lawsuit against Dolan and Madison Square Garden, stemming from his ejection from a game and ensuing arrest three years ago, was dismissed last month.

MSG called for "peace between us" when a federal judge dismissed Oakley's claim, though the rebounding machine said he will appeal.

"There should have been peace anyway," Oakley said. “I played there 10 years. Show me some respect. They keep me disrespecting me. I feel sorry for the people who stuff keeps happening to. It's just not right.”

Judge Richard J. Sullivan ruled last month in U.S. District Court in Manhattan that the case "had the feel of a public relations campaign" and Oakley hadn't alleged a plausible legal claim under federal pleading standards.

Oakley had alleged assault, battery and false imprisonment, along with defamation after Dolan and the Knicks implied he had a problem with alcohol. Oakley was sitting near Dolan at a game on Feb. 8, 2017. He was approached by security soon after arriving and began to scuffle with them before he was removed from his seat and arrested.

"I didn't do nothing," Oakley said. "I got drug out and talked about like I was a person laying in the street."

The Knicks' latest case happened Monday night when a video circulated online during New York's 125-123 victory over Houston showing Lee getting frustrated and yelling at Garden security outside an elevator, leading to confusion that he may have been thrown out of the building. However, a Knicks spokesman said that was untrue and that it was simply an issue of Lee using the wrong entrance.

Lee said he has been using the employee entrance on 33rd Street for more than two decades as a season ticket holder. The Knicks wanted him to use the entrance for celebrities, which is two blocks away.

Lee told ESPN on Tuesday he wouldn't be attending another Knicks home game this season.

"This doesn't damage Spike Lee," Oakley said. "This does damage to the fans at the game. The fans who watch on TV. And of the NBA. To see one of the franchise owners keep acting like this, it's just bad."

The Knicks are 19-42 and headed toward their seventh straight season out of the playoffs.

"I ain't ever seen a team lose make this much news," Oakley said. "Maybe the Dallas Cowboys."