Former All-Pro wide receiver Antonio Brown made yet another media appearance since his release from the Tampa Bay Buccaneers, and he even talked about what franchise he’d like to be a part of.

Brown, who joined ex-wide receiver Brandon Marshall on the "I Am Athlete" podcast, was asked by Marshall who is the one signal-caller he’d like to play with next.

"That’s who you want to play for?" Marshall responded.

"Action Jackson," Brown said. "Let’s give Lamar Jackson his flowers. … Shout out Lamar Jackson. That’s it. Lamar Jackson is a great quarterback. Not only him throwing the ball, the dynamic of him playing, the excitement." 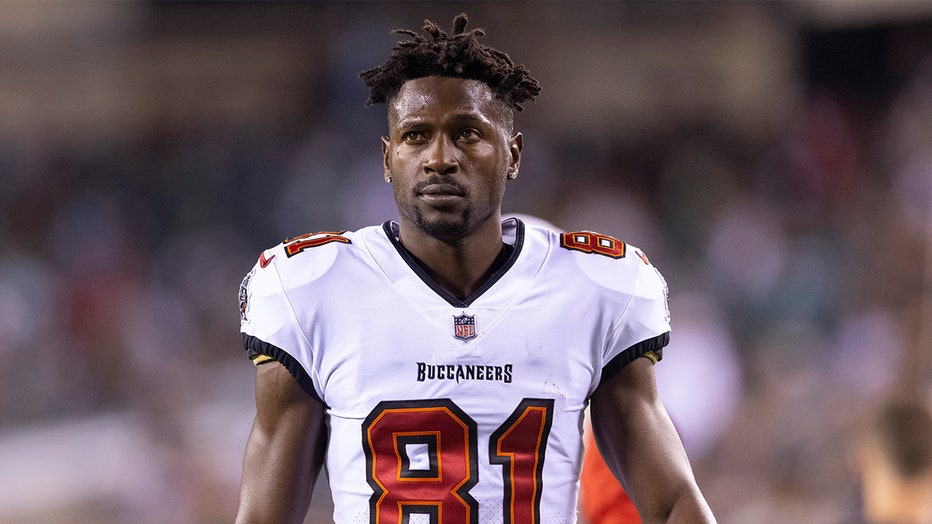 PHILADELPHIA, PA - OCTOBER 14: Antonio Brown #81 of the Tampa Bay Buccaneers looks on prior to the game against the Philadelphia Eagles at Lincoln Financial Field on October 14, 2021 in Philadelphia, Pennsylvania. (Photo by Mitchell Leff/Getty Images

Jackson came across Brown’s interview on the podcast, and he retweeted the video with a smiling purple devil emoji. Brown was once rumored to join the Baltimore Ravens back in April 2020 when he was working out with Jackson and his cousin Marquise Brown. After the video appeared on social media, Jackson was asked if he wanted the Ravens to sign Brown.

"I’d be happy if they signed him," Jackson said of Brown, who was coming off a 2019 season in which he was traded from the Steelers to the Raiders. Instead, Brown was later released and signed with the Patriots. After one game with the team, he was released when sexual allegations were mounting against him.

"He’s a great player. He showed it each and every year when he was with the Steelers in the past, but it’s not my decision," Jackson said.

Brown’s NFL future is uncertain, but he made it clear who he would like to play with next year.

Dan Canova is a sports reporter for Fox News Digital. Story tips can be sent to Daniel.Canova@fox.com and on Twitter: @DanCanova