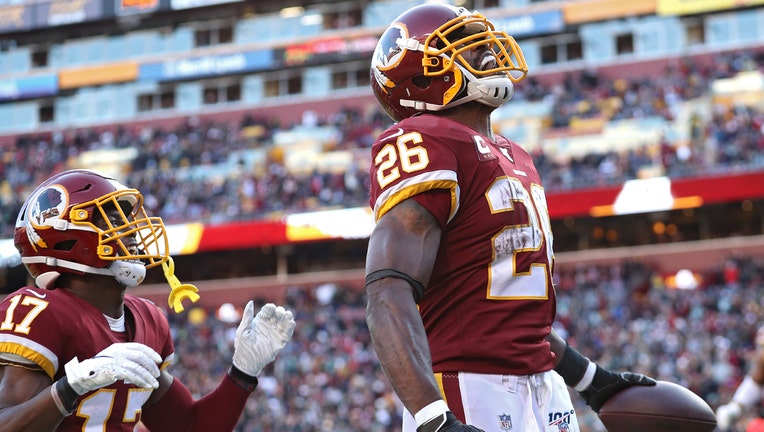 Running back Adrian Peterson #26 of the Washington Redskins celebrates after scoring a touchdown against the Philadelphia Eagles during the fourth quarter at FedExField on December 15, 2019 in Landover, Maryland.

LANDOVER, Md. - A strong offensive outing wasn't enough Sunday for the Redskins, who fell to the Philadelphia Eagles in a last-minute heartbreaker.

Acclaimed college football coach Urban Meyer was in owner Dan Snyder's box to watch Sunday's game, fueling speculation that he may be heading to the Burgundy and Gold.

Two of Meyer's former players at Ohio State, Dwayne Haskins and Terry McLaurin, showed out for their old coach too.

Haskins was mostly sharp, completing more than 65 percent of his passes for 261 yards and two touchdowns. McLaurin added five catches for 130 yards and a touchdown, including a 75-yard score in the 1st quarter:

But the Eagles took Haskins' ill-advised toss on the final play of the game to the house to make Sunday's loss worse.

That was after the Eagles drove down the field to score a go-ahead touchdown in the final minute of the game.

One bright spot for the Skins: Adrian Peterson. The running back padded his Hall of Fame resume with his 110th rushing touchdown, matching Walter Payton for 4th all-time in NFL history.

Another bright spot for the Skins: their season, now 3-11, is almost over.

Should the Redskins hire Urban Meyer as their head coach? Take our Fox 5 Instapoll to weigh in.