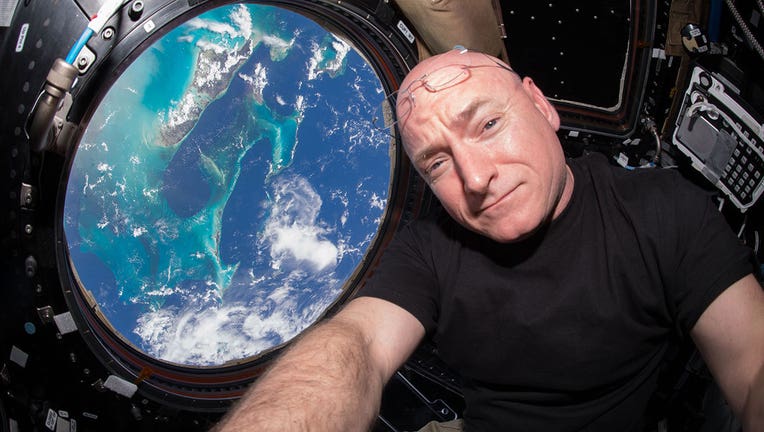 WASHINGTON (AP) - After spending nearly a year in space, astronaut Scott Kelly is hanging up his spacesuit. NASA announced Kelly's retirement on Friday, less than two weeks after he returned to Earth. He leaves the space agency on April 1.

The 52-year-old Kelly spent a U.S.-record 340 days in orbit on the International Space Station to see how the human body holds up for long periods of time in space. His results are being compared to those on the ground from his twin brother, Mark, who is a retired astronaut.

Scott Kelly also holds the American record for most time in space: 520 days over four missions.

"I look forward to continuing my 30 years of public service in a new role," Kelly, who joined the Navy in 1987, said in a Facebook post. "To continue toward any journey, we must always challenge ourselves to take the next step."

During his one-year trip, Kelly posted hundreds of images, mostly of Earth from orbit, on social media. But he also engaged in a little fun, donning a gorilla suit that was a gag gift from his brother and chasing fellow astronauts through the space station in a video.

"This year-in-space mission was a profound challenge for all involved, and it gave me a unique perspective and a lot of time to reflect on what my next step should be on our continued journey to help further our capabilities in space and on Earth," Kelly said in a statement issued by NASA.

No specific plans for what's next were announced. But Kelly will continue to undergo periodic medical tests as part of his year-in-space mission, NASA said.

"Adjusting in space is easier than adjusting to Earth for me," Kelly said in his first postflight news conference a week ago. Even then he gave a hint of what was to come, saying he doubted he'd fly again for NASA but adding, "I'll never be done with space. I will always be involved."

"I'm willing to bet that no one could name another NASA astronaut, anyone not close to the program," Logsdon said. "It clears the way for the next generation of space fliers. There are a few veteran fliers left, but not many."

NASA Administrator Charles Bolden, a retired astronaut himself, said the space agency and science in general is grateful to Kelly, who he added deserves "meals that don't come in a bag, a cold beer, hot showers, cool autumn breezes, the sounds of birds chirping, the ability to lay his head on an actual pillow and so much more of the pleasures of life."

Astronauts who eventually will land on Mars "will be following in the footsteps of one of the finest astronauts in the history of the space program, my friend, Commander Scott Kelly," Bolden said in a statement.

Kelly returned from the space station on March 2, landing in Kazakhstan with Russia's Mikhail Kornienko, his partner for the one-year mission. The usual space station stint is six months.

His re-entry into land living was good and bad. Home in Houston, he dove into his backyard pool still in his blue flight suit, going underwater for the first time in nearly a year. But clothing was a problem. In space, his clothes floated around him and didn't touch his skin.

"It's very, very sensitive," he told reporters last week. "It's almost like a burning feeling wherever I like sit or lie or walk."

Before leaving orbit, Kelly tweeted: "The journey isn't over. Follow me as I rediscover #Earth!"

His Twitter followers have since read about his first steak, first dental appointment, first rain and that dip in the pool.

Follow Seth Borenstein at http://twitter.com/borenbears and his work can be found at http://bigstory.ap.org/content/seth-borenstein