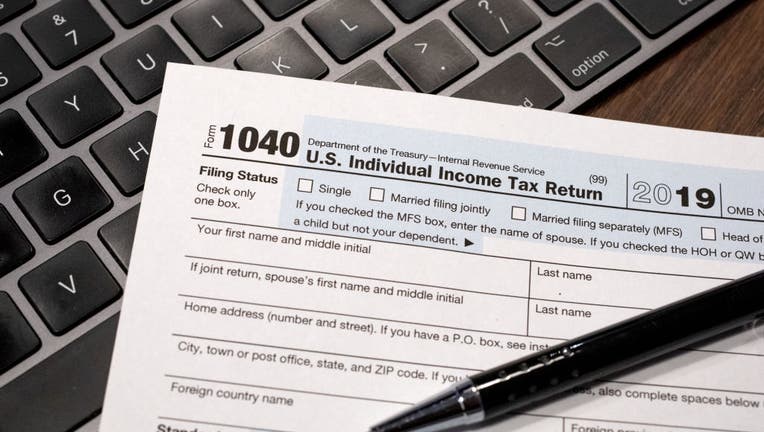 FILE - A U.S. Department of the Treasury Internal Revenue Service (IRS) 1040 Individual Income Tax form for the 2019 tax year is arranged for a photograph in Tiskilwa, Illinois, U.S., on March 20, 2020. Photographer: Daniel Acker/Bloomberg via Getty

WASHINGTON - The year 2021 is quickly coming to an end, which means it’s the last chance to save on taxes for many Americans.

TurboTax, the tax income return software by Intuit, says many filers may be able to save a bundle on taxes "if they make the right moves," regardless of their financial situation.

Here are some year-end tax tips to help streamline the process, maximize your refund or lower the amount you may owe.

Create a checklist and do an estimate

This tax season could be more complicated for many with pandemic-related additions to the tax code like the Child Tax Credits and economic stimulus payments. Experts say it’s important to start early by creating a checklist of documents needed or still expected to come in the mail, such as W2s or other income-related information.

A survey conducted earlier this year from the National Opinion Research Center at the University of Chicago found that 32% said they didn’t know if they would get a refund or if they would owe money. Taxpayers may want to use an automated tax calculator online to get a rough idea of their tax bill, including free programs via TurboTax or 1040.com.

Income is taxed in the year it is received, TurboTax points out — which suggests attempting to defer income to 2022, if possible.

"It's tough for employees to postpone wage and salary income, but you may be able to defer a year-end bonus into next year—as long as it is standard practice in your company to pay year-end bonuses the following year," the company states online.

Those who are freelance or are self-employed may be able to delay billings until late December, which could ensure that they won’t receive payment until the next calendar year.

"Of course, it only makes sense to defer income if you think you will be in the same or a lower tax bracket next year," TurboTax writes. "You don't want to be hit with a bigger tax bill next year if additional income could push you into a higher tax bracket."

If that situation is likely, the company suggests accelerating income into 2021 in order to pay tax on it in a lower bracket sooner.

Some may be able to lower their tax bill by accelerating deductions in 2021, such as contributing to a charity.

"For 2021, this amount is up to $600 per tax return for those filing married filing jointly and $300 for other filing statuses. In 2020 you could deduct up to $300 per tax return of qualified cash contributions if you took the standard deduction," TurboTax points out.

Such actions must have a receipt to prove contributions, regardless of the amount.

Other expenses taxpayers can accelerate include a property tax bill due early next year or a doctor or hospital bill, according to TurboTax.

Sometimes accelerating tax deductions can actually end up costing money if the person is already in the alternative minimum tax (AMT) or has inadvertently triggered it. The AMT was originally designed to keep wealthy taxpayers from using loopholes to avoid paying taxes, but because it was not automatically updated for inflation, it’s now increasingly impacting the middle class.

"The AMT is figured separately from your regular tax liability and with different rules. You have to pay whichever tax bill is higher," TurboTax explains. "This is a year-end issue because certain expenses that are deductible under the regular rules—and therefore candidates for accelerated payments—are not deductible under the AMT."

For example, state and local income taxes and property taxes are not deductible under the AMT. For those who expect to be subject to it in 2021, don’t pay the installments due that are due in 2022 in December of 2021, TurboTax recommends.

"Tax-loss harvesting" may be able to help Americans reduce taxes now and in the future. It allows people to sell investments that are down, replace them with similar investments, and then offset realized investment gains with those losses," according to Fidelity. The end result is that less money goes to taxes and more may stay invested.

TurboTax says if losses are more than gains, Americans can use up to $3,000 of excess loss to wipe out other income.

"If you have more than $3,000 in excess loss, it can be carried over to the next year. You can use it then to offset any 2021 gains, plus up to $3,000 of other income. You can carry over losses year after year for as long as you live," the company says.

Tax-deferred retirement accounts are great investments because they compound over time free of taxes and can grow to a substantial sum, TurboTax points out.

Those who can’t afford that much may want to try to contribute at least the amount matched by their employer.

Americans can also consider contributing to an IRA, otherwise known as traditional individual retirement accounts, which are tax-deferred. The contributions made to the account may entitle filers to a tax deduction each year.

Flexible Spending Accounts (FSAs) are essentially bank accounts reserved to pay for out-of-pocket health care costs and individuals can avoid both income and Social Security taxes on the money put into it.

Contributing to an FSA reduces taxable wages since the account is funded with pretax dollars. Participants enjoy an average of 30% of tax savings on the total amount they contribute to the account, according to Investopedia.

But as a word of caution, employees should avoid over-funding their FSA accounts as any balance remaining is commonly forfeited at the end of the year. TurboTax recommends checking with the employer to see if it has adopted a grace period allowed by the IRS, which permits employees to spend 2021 set-aside money as late as March 15, 2022.

"If not, you can do what employees have always done and make a last-minute trip to the drug store, dentist or optometrist to use up the funds in your account," the company says.