An abortion rights protester says she is suing San Francisco after the fire department sedated her and dragged her from the floor at a demonstration at the Chase Center during a Warriors' playoffs game in June.

SAN FRANCISCO - A woman is suing the San Francisco Fire Department claiming a firefighter injected her with a sedative against her will while she was protesting abortion rights at a Warriors game this summer.

Kareim McKnight, who is being represented by well-known civil rights attorney John Burris, filed the federal lawsuit against San Francisco, as well as its police and fire departments on Tuesday, demanding damages for being assaulted and given a drug called Versed – which is a benzodiazepine and can cause drowsiness and relieve anxiety -- without her consent.

San Francisco police and the San Francisco Fire Department referred all comment Wednesday to the city attorney's office. City Attorney David Chiu told KTVU he could not comment because the city had not yet been served.

According to the suit, McKnight and her friend, Amanda Piasecki, were at the Warriors playoff game at Chase Center on June 13 against the Boston Celtics.

Both women were also protesting the Supreme Court's overturning of Roe v. Wade inside the stadium. They carried a banner that read: "Overturn Roe? Hell no!"

As they reached the main floor, the suit states they were met by Allied Universal Security guards who dragged them out of the arena into the stadium garage.

An activist group called Rise Up 4 Abortion Rights Bay Area provided some video of the women being pulled out by their feet by men in suits, which the Burris law firm posted on YouTube.

McKnight then said a security guard put a knee on her back before she was handcuffed. She continued to chant pro-abortion slogans.

Then, without her consent, a San Francisco fire employee injected McKnight "with a sedative/hypnotic agent against her will while she lay strapped to a gurney," the suit states.

McKnight told Burris she knows what drug she was given because she looked at her medical records. There is also no video that was provided of McKnight being sedated.

The venue is private and the protest came during basketball season's most-watched event. Still, McKnight never threatened anyone or became violent, her legal team said.

The Burris firm also posted video from inside the ambulance, which appears as though McKnight took herself. She is alert and speaking coherently throughout.

"I'm worried about whatever drug they gave me," McKnight is heard saying. "And if it's going to affect me."

A man inside the ambulance notes that she didn't have any kind of reaction.

"If I would have had a reaction then f--- me?" she said. "You just give people drugs and you don't know if they're going to be allergic? It was completely unnecessary to do that. The only person who has been violently attacked in here is me…and you injected me."

She goes on: "And I have to ask? Is this something you would just reserve for Black people? How often do you do this to protesters? Have you ever done this to a protester?"

The employees in the ambulance say something that sounds like "stop talking" to McKnight.

She was taken to Kaiser Hospital, where she was released shortly afterward.

McKnight also took about a 10-minute video of herself from inside the ambulance, talking into her phone about the horrors of the overturning of Roe v. Wade. 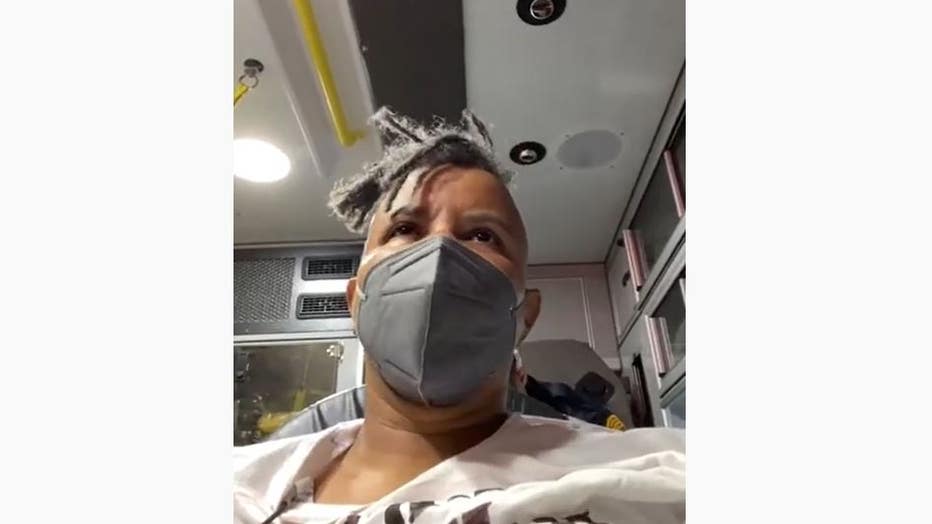