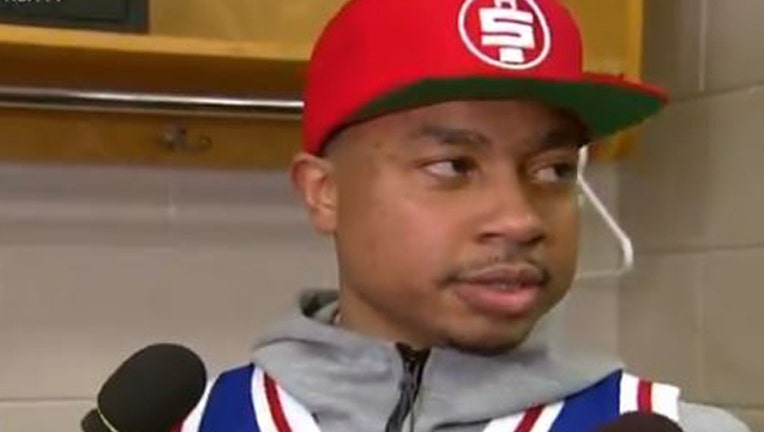 PHILADELPHIA - Washington Wizards guard Isaiah Thomas was ejected from the team's game against the Philadelphia 76ers Saturday night after he confronted a spectator in the stands — who he said repeatedly cursed and gave the middle finger because he was upset the team's loss wouldn't get him a free milkshake.

Late in the fourth quarter of the game at the Wells Fargo Center in Pennsylvania, Thomas walked to the stands and verbally approached a 76ers fan who had "both of his middle fingers up, and said, 'F--- you, b----' three times."

Speaking calmly to reporters, Thomas said he missed a first free throw and made a second and that's when he spotted the man. "So then the timeout goes, and I go in the stands to confront him."

“I say, ‘Don’t be disrespectful. I’m a man before anything and be a fan,’" the guard continued. "And his response was, ‘I’m sorry. I just wanted a Frosty' because if you miss two free throws, I guess the fans get a Frosty."

The 76ers have been promoting "Wendy’s Frosty Freeze-Out," which offers fans free desserts if "an opposing player misses two consecutive free-throw attempts in the second half of a 76ers home game."

But Thomas said the spectator "crossed the line" and told security about him "so they can get kicked out the game cause that's no way, shape or form that should be allowed at all."

It's against NBA rules to purposely enter arena stands. But Thomas said he thinks the league won't suspend him for such actions and will understand where he was coming from.

“The league knows: I did nothing wrong,” Thomas said. “There just should be a respect factor [with fans]. Like, I’m not going to go to anybody else’s job and call you out of your name, no matter how mad I make you. I don’t even know how I can make you that mad when we were down 15. We lost the game. That’s all I’m saying. I’m a man before anything, and that just wasn’t OK to do — and I just had to say something.”

Wizards Coach Scott Brooks told The Washington Post he didn't know why Thomas entered the stands, but said "there’s no reason" to do so. "Maybe there’s one [reason], but I’ll keep that between me and myself. . . . But, no, I don’t know what happened.”