With most people staying cooped up inside their homes, should bars and restaurants across the D.C. region where indoor dining is banned be allowed to resume again?

ROCKVILLE, Md. (FOX 5 DC) - With most people staying cooped up inside their homes, should bars and restaurants across the D.C. region where indoor dining is banned be allowed to resume again?

Many dining establishments whose operators are losing business due to the indoor ban, told FOX 5’s Ayesha Khan Friday that the operation should be allowed once again even if it is with capacity limits.

Health officials in Prince George’s and Montgomery counties are going against that notion, saying it’s not a good idea right now.

Some other cities across the country, such as in Chicago, Mayor Lori Lightfoot is pushing for lifting the indoor dining ban because she said that people are having underground parties, dinner parties, large private get-togethers at home and inside other indoor settings, where there are no restrictions.

Dr. Joe McDonald, an internal medicine and infectious disease expert in Bethesda, said Thursday it’s probably not a good idea to push the same notion in Montgomery or Prince George’s counties where there is currently a ban on indoor dining and infection numbers continue to rise.

"It’s hard to make the connection that restaurants are closed and that’s why people are having bigger parties," said McDonald. "I don’t think the answer is to relax and say, ‘Ok we will do this dangerous activity instead of that dangerous activity,’. I think the answer is, more education and potential fines and punishment where they put other people’s lives at risk." 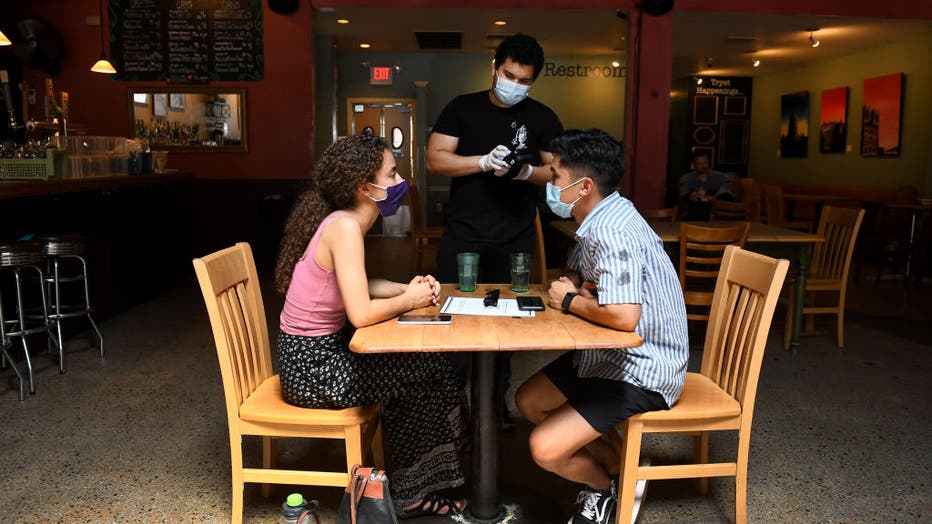 Tryst server Omar Hernandez uses a divisive to take the order and get phone numbers for Stephanie Durham and David Cuntapay in case the restaurant needs to contact them if someone tests positive for covid-19 June 22, 2020 in Washington, DC. (Photo by

Ayesha checked in with the Montgomery County Department of Health and asked if the ban on indoor dining has helped reduce infections.

According to, Dr. Earl Stoddard, director of the Montgomery County Office of Emergency Management & Homeland Security, there has been a "precipitous drop in infections in restaurant workers. The modeling that Johns Hopkins University provided us before indoor dining was suspended. Cases and hospitalizations would increase even after they were closed. The peak, however, would be less than our capacity limits in the state. That's exactly what we are seeing. Opening right now, would risk that."

"I don’t think most people get their house professionally sanitized twice a week by a company whose only job is to completely disinfect ceiling to floor," said Graham Gursky, general manager of Quincy’s South Bar and Grille in Rockville. "So it’s kind of a weird argument."

"We find that it is parties its gatherings at homes and other family and friends activities that are outside of businesses that are the hot spots for spreading the virus," said Marshall Weston, president and CEO of the Restaurant Association of Maryland. "So in essence, by closing down restaurants, they have forced people to gather in their homes which is adding to the problem."